"Girl in the Flower Dress" 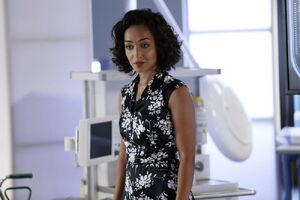 You've got two choices - take what's in this box, or we put you in a slightly bigger one.

Appearing in "Girl in the Flower Dress"

Synopsis for "Girl in the Flower Dress"

On the streets of Hong Kong, Chan Ho Yin entertains a small audience with his pyrokinetic abilities under the guise of a street magician. Chan is enraged when some people in the audience are skeptical of his abilities, leading him to displaying his abilities in public. One member of the audience, Raina, however, is intrigued by his abilities, and Chan follows her back to her hotel room where he is abducted.

On the Bus, news of Chan's abduction leads Coulson to believe Skye, as an operative of the Rising Tide, hacked into S.H.I.E.L.D.'s servers and leaked his location. To prove her innocence, Skye tracks down the source of the leak - an Austin, Texas-based hacker named Miles Lydon. The team goes to Austin to apprehend the hacker, but Lydon is able to evade capture, only to find Skye, his protege, in his apartment. After a brief argument, the two have sex. But as Skye goes to pick up her clothes, she finds Agent Melinda May waiting for her on the other side of the door.

In S.H.I.E.L.D. custody, Lydon remains flippant over his crime, claiming that he gave the information to the world. He and Skye then start arguing inside the Box, the former quoting the Rising Tide manifesto, Skye remains serious about Chan's situation. When Ward reveals to Skye a number of bank deposits Lydon made following the leak, proving he's hypocritical to the Rising Tide's beliefs. Lydon confesses to have been approached by a "girl in a flower dress", who worked her charm about his abilities and directed him to a S.H.I.E.L.D. datafeed for him to hack. Skye, angered that he lied to her, retorts that no one with good intentions would give away that much money. Lydon defends that he checked that it wasn't an evil corporation manipulating him and traced the money to environmentalist group. When he mentions centipedes as part of the group's research, Ward and Skye share a disturbed look and realize who the culprits are - Project Centipede.

Back in Hong Kong, Raina convinces Chan to help her by making him think she will turn him into a superhero called "Scorch." In reality, Raina and Project Centipede only want Chan to find a way to stabilize their Centipede weapon's Extremis element. The Doctor, the same Project Centipede researcher who worked with Mike Peterson in Los Angeles, finds that Chan's blood platelets are fire-resistant, and begins to extract them. Without those platelets, Chan's body can no longer withstand the heat it generates, and he begins to burn from the inside.

Meanwhile, Agents Coulson, May and Quan (the S.H.I.E.L.D agent in Hong Kong overlooking Chan) break into Project Centipede's Hong Kong headquarters to rescue Chan. Chan, now fully embracing his "Scorch" identity, rejects S.H.I.E.L.D.'s help, and, after injecting himself with the platelets extracted from him, kills Agent Quan. Scorch gets away from Coulson and May, and makes his way towards Raina and the Doctor. Raina is able to get away, but Scorch leaves the Doctor nothing but a pile of ashes. Unable to stop him, Coulson is left no choice but to kill Scorch. Agent May injects him with a paralytic substance, causing him to start combusting. The team makes it out with barely enough time as Lydon, briefly working with S.H.I.E.L.D, directs the explosion into the atmosphere.

Back on the Bus, Coulson leaves Lydon in Hong Kong, but not before donating the money Lydon was paid for Chan's location to Agent Quan's family and attaching a bracelet to his wrist that prevents him from using electronics. Coulson then goes back to his office, where he grills Skye into giving up a memory card that contains all the information she's found on her parents, including a medical examination from the orphanage she grew up in S.H.I.E.L.D. heavily redacted. Skye vows that no matter what Coulson decides to do, she'll never stop looking for the answers. Coulson warns she may not like what she finds, though Skye says it can't be worse than anything she imagined. Coulson agrees to help, though Skye would have to wear a bracelet as part of her probation.

At an unknown place, Raina visits a man in jail, telling him of the Doctor's demise, to his delight, and of Coulson's team's interference. Thus, she requests that he get in touch with "the Clairvoyant." 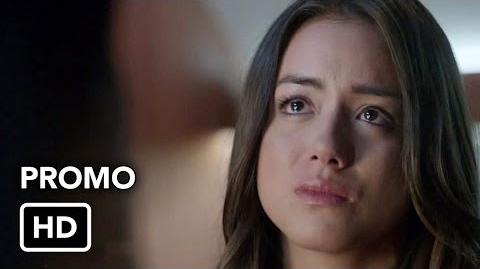 Like this? Let us know!
Retrieved from "https://marvel.fandom.com/wiki/Marvel%27s_Agents_of_S.H.I.E.L.D._Season_1_5?oldid=6498128"
Community content is available under CC-BY-SA unless otherwise noted.