Marvel Database
Register
Don't have an account?
Sign In
Advertisement
in: Episodes, Marvel's Agents of S.H.I.E.L.D. Season 1, 2013, November,
and 46 more

There's only one person on this plane capable of finding a solution for this. And I'm willing to bet my life that she will.

Two cub scout leaders in rural Pennsylvania tell their young group a scary story, before one hears a faint humming and wanders off, seemingly part of the prank. Soon, the other leader notices a cup floating in mid-air, sending the group racing to the truck, whose battery forcibly leaps through the hood. Just outside, the first scout leader Adam Cross floats in midair, dead, his body surging with electricity.

Back on the bus, Simmons puts Coulson through a physical, but finds him in surprisingly good health for his age. Meanwhile, Fitz attempts to bond with Skye over their amusement at the icy Ward, who seems not to have forgiven Skye for her earlier betrayal. Shortly after, the team is brought to the site of the still-floating Adam Cross, who drops the moment Simmons touches his mysterious head wound, as Coulson resolves to call Agent Blake on the matter.

Back on the bus, Skye finds that Cross’s background checks out clean, while an “interrogation” of his scout partner reveals no foul play. Coulson points out to Ward that he seems especially hard on Skye, something he justifies by her betrayal of the team. Suddenly, the group are alerted to another electromagnetic disturbance at a local farmhouse, for which Ward, May and Coulson race to the scene. The trio find the floating body of a man named Frank Whalen, whom Skye finds to have served as a volunteer fire fighter with Cross on the day of the Chitauri invasion.

After retrieving the body, Coulson travels to the firehouse in search of other men present for the attack, finding that another of them, Tony Diaz, has begun to display the same symptoms as the others. Tony denies that he used any kind of weapon on the others, though May finds a discarded Chitauri helmet the group kept as a souvenir, which Simmons identifies to be the source of an alien virus that infected the three firemen. Coulson clears out the building as Diaz begins to show further symptoms of his impending demise, though Coulson remains behind to comfort the man with his own experience of death, which he acknowledges to have been a closer call than 8 seconds.

S.H.I.E.L.D. quarantines the fire fighters and helmet, tasking Coulson’s group with transporting the artefact to “The Sandbox” facility across the globe, while May asks Coulson how he’d been feeling since his earlier physical. In the air, Simmons summons Coulson (heh) to the lab to discuss the virus’ fascinating transmission properties, before Coulson notices an instrument floating behind Simmons, and reluctantly quarantines her for the infection. Now given approximately two hours to live (and 3 until the plane’s destination), Fitz and Simmons put their heads together for a cure, though divided by the quarantine.

The first attempt at a cure kills the lab rat, while Ward laments to Skye that he can’t save the team from problems he can’t see or understand. Meanwhile, Coulson calls Agent Blake to learn the priority dictates they eject Simmons from the plane if she threatens the mission, though Coulson fakes a bad transmission to avoid dealing with the order. Downstairs, Fitz and Simmons argue about dragging one another into such dangerous work, though Fitz soon realizes that in each instance Simmons tellingly made sure to be by his side. The pair then realize that the only way to find a cure would be from someone immune to the virus, specifically a Chitauri warrior, the cells of which would be inside the helmet itself.

Fitz retrieves the helmet and races downstairs, breaching the quarantine to be with Simmons in a show of support. The pair work diligently to find a cure, but soon find that the result still kills the lab rat in the same floating manner. Resigned to her fate, Simmons gives her last requests to Coulson, and asks for a moment of privacy with Fitz. Fitz goes to continue working, but Simmons knocks him out and opens the plane’s cargo bay door for herself. When Fitz awakens, he sees that the rat actually survived the cure and was only momentarily stunned, though he fails to alert Simmons in time before she leaps from the back of the plane to her death.

Fitz prepares a vial of the cure and a parachute, but Ward beats him to the punch and leaps out after Simmons, just barely managing to catch her in time and inject the cure. Afterwards, Coulson chews a recuperating Simmons out for her little stunt, but praises her bravery. Ward even breaks a bit, admitting to have overheard their earlier impressions of him, while Skye offers a hug as well.

Later on, Coulson confesses to May that he hadn't actually been ordered to undergo a physical, but rather requested the tests on his own, feeling unlike himself. May asks to see Coulson’s gaping scar, reminding him that deathly experiences have a way of changing people no matter what, and he should embrace whatever change he feels. Downstairs, Simmons thanks Fitz for his almost-heroic efforts in saving her, kissing him on the cheek.

After the credits, Coulson meets with Agent Blake outside “The Sandbox” to deliver the helmet, though Blake reminds him that his near-death experiences doesn't give him license to disobey orders. Telling Blake to get used to his newfound confidence, Coulson watches the agent back down and leave, tapping Lola along the way. 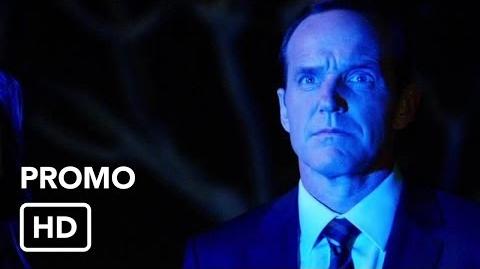