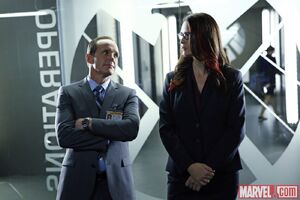 I can't be a part of your bad-girl shenanigans. I like following the rules and doing what's expected of me. It makes me feel nice.

Appearing in "The Hub"

Synopsis for "The Hub"

Agent Coulson is dragged through an underground lair, making light of both the situation and his interrogator, before revealing the man as S.H.I.E.L.D. Agent Shaw. Ward and May appear, taking out the other guards and leading the group out of the base, situated in an arctic locale. Back on the bus, Simmons manages to remove a capsule of intelligence from Shaw’s cranial cavity, as Coulson reveals they’ll be taking it to “The Hub.” Skye offers to decrypt the information, though Coulson quickly reveals the matter to require “Level 8” clearance, stunning Skye that the team so readily accepts the secrecy.

Arriving at the Hub, Skye quickly marvels at the sheer size and presence of the agents in operation (though not as large as the Triskelion, Simmons points out). While Skye faces restricted access, Coulson, May and Ward join Agents Sitwell and Victoria Hand in a briefing room to discuss a mission involving separatists from Russia. Their weapon enables them to remotely activate any other weapons from a distance, for which Agent Hand proposes a two-man team of Ward and Fitz, the latter’s expertise needed for the enemy device.

Back on the bus, Simmons panics and helps Fitz prepare for his mission, while Skye remains upset about the details being kept from the team. A while later, Fitz and Ward drive to an isolated bar in the Caucasus mountains in search of Ward’s contact Uri, though the bar quickly turns unfriendly when the patrons reveal that Uri is dead. Skye and Simmons continually worry about their teammates, while Hand jokes to Coulson about his preferential treatment from Fury, getting sent to “Tahiti” for his injuries. Mention of the mere word elicits the same “it’s a magical place” once more, though this time Coulson catches himself on it.

Fitz and Ward find themselves interrogated by a woman named Marta, though when the power to the bar goes out at an opportune moment, Fitz manages to ingratiate himself to the group by fixing their power in time to get the game back on. Later, Fitz surprises Ward by revealing that he himself caused the blackout, before their convoy is overtaken by enemy guards, forcing the duo to take refuge in a nearby storm drain.

While Coulson consults a stoic May about the importance of keeping secrets, Skye sends a visibly nervous Simmons to access a restricted console nearby, which quickly becomes complicated once Agent Sitwell inquires about her actions. Simmons panics and uses the night-night gun on the agent, forcing them to expedite their plan. Meanwhile on the mission, Fitz goes to enjoy a sandwich Simmons prepared for him, before Ward throws it away, noting that the hunting dogs will track them down.

Skye finally gains access to the S.H.I.E.L.D. server, but finds herself without enough time to find the redacted document about her parents, instead researching Ward and Fitz’s mission to discover that no extraction point has been planned. After being caught, Skye refutes Coulson’s notions about secrets and the bureaucracy, asking if he knew that Ward and Fitz had been sent on the mission without an escape plan, but Coulson only responds that his knowledge is classified.

While Ward and Fitz arrive to the factory, infiltrating and taking out guards, Coulson asks Agent Hand why he wasn't’t notified about the lack of escape plan. Hand point out that knowledge of the mission’s true danger would have compromised Fitz’s effectiveness, though Coulson fires back that the agents should have known what they signed up for. Meanwhile, Ward asks Fitz for the final instructions to disable the device, having realized that no extraction team will arrive, and hoping to spare the younger agent from being captured. Fitz insists on remaining with the mission, believing himself to be every bit the capable S.H.I.E.L.D. agent that Ward is, before removing the device and tripping the alarm.

While Coulson and the others mount up to form their own rescue mission, Ward and Fitz do their best to handle advancing guards, Ward taking them out physically while Fitz disables their weaponry using the extracted device. S.H.I.E.L.D. begins their attack on the compound, while Ward and Fitz barely manage to make it outside, May thankfully piloting the bus overhead to take out a small force advancing on the pair. Back at the Hub, Victoria Hand smirks at the fact that Coulson’s team didn't end up needing an official extraction after all, taking care of themselves as he’d said earlier.

The threat abated, Ward and Fitz return to the bus, Simmons reservedly showing her relief to Fitz. That night, Coulson visits Skye to reveal he looked into the redacted document about her history, which revealed little other than that a female S.H.I.E.L.D. agent was the one to bring her to an orphanage. Skye thanks him for the scrap of information, though when Coulson meets with May upstairs, the pair realize a larger mystery looms around the mysterious agent, who ended up dead after dropping Skye off.

After the credits, Coulson puts in a call to access information about his own death and recovery report, though the receptionist finds that Coulson doesn’t have clearance for the file, even if he should. The agent offers to put in a request to Director Fury, but Coulson declines. 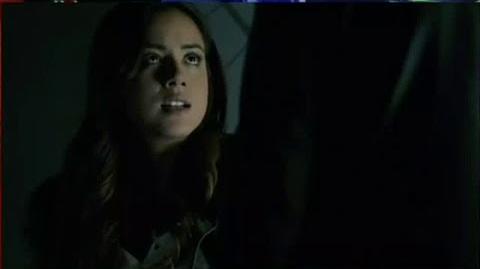 The Hub at Marvel Movies Wiki

Retrieved from "https://marvel.fandom.com/wiki/Marvel%27s_Agents_of_S.H.I.E.L.D._Season_1_7?oldid=4813640"
Community content is available under CC-BY-SA unless otherwise noted.