Marvel Database
Register
Don't have an account?
Sign In
Advertisement
in: Episodes, Marvel's Agents of S.H.I.E.L.D. Season 1, 2013, November,
and 49 more

In ancient times, people believe the heavens were filled with gods and monsters and magical worlds. Then, as time passed, those beliefs faded into myth and folklore. But now we know the stories are true. Other worlds, with names like Asgard, do exist. And beings once revered as gods, like Thor, have returned, leaving us with more questions... an enormous mess to clean up.

For all the knowledge that the gods of Asgard are in fact alien beings worshiped as gods, Coulson and his team find themselves stuck with the clean up after Thor’s destructive battle with Malekith through Greenwich. Simmons ducks a call from her concerned parents, while Coulson laments that Thor never sticks around after the destruction, and Skye expresses her excitement and intrigue of learning about the Asgardians as alien beings. Elsewhere in a Norway national park, a couple follows directions to a mysterious tree, chopping it down to find an Asgardian staff that grants the woman rage-filed strength by touching it, which she then uses on a park ranger.

Later at the scene, Ward helps Simmons through her reticence to investigate the downed tree, using her tech to create a 3D model of the staff for Fitz to print out. The analysis reveals the artefact as Asgardian, while Skye sees over the news that the couple, Petra Larsen and her boyfriend Jakob, have been connected to several ongoing Norway riots as part of a Norse hate group. In order to identify the item, Coulson suggests they contact the same professor he used for Thor’s hammer, a man named Elliot Randolph.

Coulson visits the professor in Spain, who identifies the artefact as one of three pieces of the Berserker staff, a rage and strength-inducing weapon used by an Asgardian army long ago. The warrior who used the staff supposedly elected to remain on Earth, and hid its three pieces around the world, though the manuscripts leave dubious clues as to their location. Several investigations fail to bear fruit, though Skye eventually tracks another potential location to a church, coincidentally in Seville.

Ward and Skye investigate the ruins of the old church, where Ward encounters Professor Randolph attempting to abscond with the staff piece himself, though touching the item forces Ward to double over in pain. Randolph manages to escape, as Skye quickly finds that Ward is not himself, seeing flashes of a boy in a well. Outside, Randolph encounters the hate group, who manage to overpower him and take the staff piece before Coulson arrives to intervene.

Simmons tests an increasingly irate and snippy Ward, while Coulson learns little from interrogating Randolph, with the professor claiming he merely wanted to study the artefact before S.H.I.E.L.D. could lock it away. Ward angrily shrugs off Skye’s questions about the memory flashes pertaining to his brother, while Simmons dismisses his actions as an adrenaline spike. Ward attempts to work through the anger with a punching bag, continually seeing images of the boy struggling in the well, as May offers to lend a hand in quelling his rage. Elsewhere, Jakob and Petra continue building an army by recruiting others to touch the staff.

Ward admits to Coulson that he feels compromised by the staff, and the painful memories it dredges up, but Coulson wonders if they might put his aggression to good use in interrogating Randolph. Ward enters the room to begin his questions, drawing a knife to the man in anger, though Randolph easily deflects and destroys the blade, revealing himself as the Asgardian in the story. Randolph admits to never liking the power that came with the Berserker staff, abandoning his lowly Asgardian life to live on Earth throughout the ages, accidentally recording his own myth. He refuses to reveal the location of the third piece of the staff but relents when Coulson reveals that he knows Thor and threatens to end his anonymity. At the very least, Randolph admits to storing the third section of the staff in a monastery in Ireland.

Arriving in the emerald isle, Randolph assures Ward that his rage will subside eventually, though the staff has a way of shining a light on unpleasant memories, in Ward’s case his first experience with hatred. The group arrive to the monastery and find the piece’s hiding place, but not before Jakob and his forces have arrived, having tortured the resident priests into giving up its location, stabbing Randolph in the heart and forcing Ward to fuel up on rage again to fight the group. Jakob and Ward battle it out on the monastery floor, while Fitz and Simmons attempt desperately to save Randolph’s life, Coulson plunging his hands into the Asgardian’s chest to stop the bleeding, and start his advanced healing.

During the fight, Ward relives the full memory from his youth, revealing himself not as the boy in the well, but as a boy up top whose brother bullied him into withholding a rope from the drowning youth. Back in the present, Ward allows May to take over, assembling the full staff as she fights off Petra, before ridding herself of the artifact without difficulty. Upstairs, Randolph regains consciousness and tells Simmons that she's the most beautiful woman he's seen in a thousand years.

Next morning, while Simmons finally accepts a call from her parents, May admits to Ward that she relives some of her worst memories daily, hence the staff had little effect on her. Coulson ponders picking up the staff, admitting his death and resurrection to Randolph, before advising the outed professor to move to Portland for a means to stay out of the limelight. He also suggests introducing Randolph to Thor next time he's in town. That night, Ward apologizes for his behavior with Skye, returning upstairs to his hotel room, before accepting an invitation to join May for a drink in hers.

After the credits, Coulson dreams of his magical beach in Tahiti, waking up in a panicked sweat. 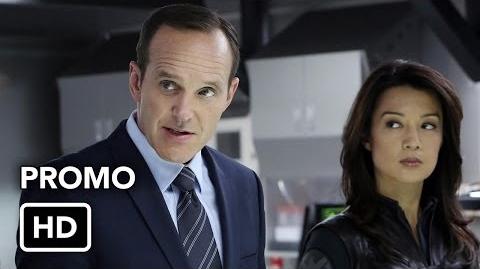 The Well at Marvel Movies Wiki