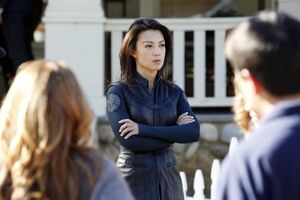 People believe what they want to believe to justify their actions.

A young woman enters a gas station for groceries, though the owner quickly confronts her about her role in a particle accelerator explosion that killed four, with one of them his friend. The woman attempts to leave in peace, though when the attendant confronts her, cans and shelves telekinetically fly at the man, and leaking gas pumps outside cause an explosion around the terrified woman.

Following their tryst, Ward and May learn of the new mission and report to the bus, where Coulson urges Skye to oversee how they handle a “welcome wagon” for those with emerging powers, such as the telekinetic in question, Hannah Hutchins. Upon the team’s arrival to a crowd outside the woman’s house however, the agitation quickly sets off Hannah’s “ability” once more, as a police car suddenly drives itself and nearly ran a bystander over had not Coulson tackled him out of the way. As the police officer draw their guns on Hannah, May quickly sedates the woman before things get out of hand.

While Fitz and Simmons investigate the accelerator facility, musing that they might prank “freshman” Skye as they had been subject to in the past, Coulson and May greet Hannah within the protected interrogation room aboard the bus. Hannah believes herself to have been forsaken by God and haunted by demons, having had no control over any of the telekinetic events, as we see an intangible figure lurking nearby. Elsewhere, Fitz and Simmons prey on Skye’s frustration with May by telling her the story of “The Cavalry” nickname, how May once liberated 100 agents on horseback.

Skye next takes her issues with May to an uncomfortable Ward, and suggesting they get her "laid", as a number of small objects around the plane seem to go missing. Meanwhile, Fitz takes a break from crafting pranks to retrieve an instrument from the bowels of the plane, unaware of the menacing figure appearing around him. Skye identifies the man as Tobias Ford, while Simmons sees that the particle accelerator seems to have tapped into some alien dimension, before Ford materializes, declaring that place to be Hell, smashes the display, and sabotages the plane to begin losing altitude.

May manages to make a smooth landing in a clearing, keeping enough power to the shielding around Hannah’s room to keep Ford out, before the group realizes Fitz is nowhere to be found. Ward and Simmons break him out of a closet, while Skye does her best to pacify an agitated Hannah from outside the cage. Fitz theorizes that the man might not be a ghost at all, but rather someone stuck between our world and an alien dimension, possibly exacerbated by the recent Convergence of ‘Thor: The Dark World.’ Suddenly, Ford appears to both groups, locking Coulson, Skye and Ward, Fitz and Simmons on opposite sides of the plane.

Coulson urges Skye not to refer to Melinda as “The Cavalry,” telling her the real story that May had once ended a hostage situation with another “gifted” and his followers, refusing to admit how she accomplished the task. Regardless, the more spirited May was lost in the exchange, and the agent was never the same. Ford appears again, demanding access to Hannah, though Simmons realizes that he loses more and more of himself each time he phases in and out. With no other options, May sneaks Hannah out of her cell and into the wilderness, looking to “fix the problem.”

Once the groups reunite and share their knowledge of Ford, Skye realizes that he hadn't actually been attacking Hannah, but protecting her, as Ford was the one to loosen the particle accelerator’s components looking to spend time with safety inspector Hannah in the first place. Meanwhile, May leads Hannah into a barn to confront Ford, who follows them and attacks May. Hannah begs him to stop, for which the man finally listens, admitting that he was the one to cause the accident, and believing himself in the process of being dragged to Hell. May urges him to let Hannah go and accept his fate, rather than cling to the person he used to be, after which the man finally dissipates.

The conflict settled, Coulson admits to Skye that her natural empathy with people makes her an ideal candidate for future “welcome wagons” with gifted individuals, before Skye joins May in the cockpit to keep her company during take off. After the credits, Fitz interrupts a game of Scrabble demanding to know who pulled the shaving cream prank on him, while May smirks from the cockpit.

Retrieved from "https://marvel.fandom.com/wiki/Marvel%27s_Agents_of_S.H.I.E.L.D._Season_1_9?oldid=4814465"
Community content is available under CC-BY-SA unless otherwise noted.