Marvel Database
Register
Don't have an account?
Sign In
Advertisement
in: Episodes, Marvel's Agents of S.H.I.E.L.D. Season 2, 2014, September,
and 58 more

I know it was a risk. If we went down today, we'd probably be down for good. But now we have a chance to survive. We have soldiers willing to sacrifice, but they need weapons. The enemy has the advantage; we need one of our own.

In 1945, the SSR capture the last remaining Hydra outpost as it is being evacuated. They take the lead Hydra agent, Herr Reinhardt, into custody, as well as the dangerous items stored there, including the "Obelisk." Before sending them off to Stark for testing, Agent Peggy Carter suggests the creation of a peacetime organization to keep such technology contained and to keep an eye on those who would use them.

In the present day, a team of Skye, May, and Triplett observe a former S.H.I.E.L.D. agent selling intelligence on a Level 10 asset to a team of mercenaries working for Coulson. As they're making their deal, they are attacked by a mysterious third party who quickly kills the former agent, steals the intel, and jumps out a window 25 ft. above the ground. The team regroups with the mercenaries - Izzy Hartley, Lance Hunter, and Idaho - and report back to Coulson at the Playground. Coulson reviews what they could retrieve, and discovers out that the Level 10 asset the former agent was selling information on was the item the SSR retrieved in 1945, the Obelisk, and the very first 0-8-4.

Meanwhile, the assassin who attacked them earlier gets in touch with his contact at Hydra. His contact rewards him for his efforts, and gives him a reward - a diamond mined from Madagascar, which he absorbs into his skin and turns his forearm into a diamond.

Back at the Playground, FitzSimmons are studying the metal shards Skye recovered from the assassin. Fitz is clearly struggling with the damage done to his brain from when he almost drowned. The metal it slowly turns back into blood. May is able to match his DNA to Carl Creel, an individual who was crossed off the Gifted Persons Index; however, the supervising agent who was responsible for Creel's supposed termination was none other than John Garrett. Creel has the ability to absorb any substance he touches, and can consciously transform the molecules of his body into that substance. Now knowing Creel was working for Hydra, Skye tries to get information from Grant Ward, who is currently imprisoned in at the Playground, as to his location. Ward, who now claims he wants to help S.H.I.E.L.D, isn't able to tell her where he is, but does reveal that Hydra would contact its agents through the white noise between S.H.I.E.L.D.'s communications. Koenig is quickly able to find one of Hydra's communications to Creel. Unfortunately, they discover multiple Hydra pings, hinting that they far outnumber the new S.H.I.E.L.D.

The team heads to Washington to stop protect the newly-promoted Brigadier General Glenn Talbot and his family from Creel. Triplett slips a phone into his pocket, at which Coulson tries to warn him but Talbot doesn't listen and destroys the device. Talbot is quickly overpowered, but May is able to intervene just in time to get Creel away from him. Skye incapacitates him with a rifle after Creel turns a chain railing into a flail and absorbs the brass into his body. The army takes Creel into their custody, while S.H.I.E.L.D. are able to take Talbot back to the Playground. Coulson is ultimately unsuccessful in trying to convince Talbot to help them in securing the Obelisk, so he ices him. Talbot soon wakes up in a black car in the middle of nowhere. He attempts to call his forces to double the security, unaware that Koenig was intercepting his call and copying his command codes. Meanwhile, Creel is able to escape his imprisonment by turning his entire body into the same substance as the cell.

Skye, Trip, May, and Hartley's mercenaries then infiltrate the army base to retrieve the Obelisk by posing as a military convoy. Although they're first held up at the gate, they're able to get through when Coulson calls the gate disguising his voice as Brigadier General Talbot's. Hartley finds the Obelisk, but is soon after attacked by Creel. Hartley attempts to use the Obelisk against him and grabs it, but the device does something to her that cripples her and won't let her let go of it. Creel escapes once the rest of the team comes to Hartley's aid; Skye then notices that the symbols on the Obelisk are the same as the diagram drawn by Garrett. Under fire from the military, Skye asks Coulson if they should abort the mission. Coulson tells them not to abort, which makes Hunter to leave with Hartley and Idaho.

Skye, May, and Trip barely make it out by stealing a quinjet. As they make their escape, Coulson reveals to Koenig and his mechanic, Alphonso "Mack" Mackenzie, that the reason he told them to continue was so they could steal that quinjet, believing they could use its cloaking technology to gain an advantage over Hydra. He doesn't believe Fitz can develop the technology on his own, as his mental state has been deteriorating ever since Simmons left, including hallucinations that makes him think she's still with the team. As Idaho drives Hartley and Hunter away from the base, Hunter is left with no option other than cutting off Hartley's hand. Right after he does this, Creel appears in the middle of the road and turns his body into asphalt. The car crashes into him and flips over. Hartley and Idaho are killed instantly, as Hunter watches helplessly as Creel absorbs the rubber in the car's tires into his hand and makes off with the Obelisk.

Back at Hydra's base, Creel's contact informs his commanding officer, Reinhardt, now known as Dr. Whitehall, of Creel's success. Whitehall looks like he hasn't aged a day since World War II. 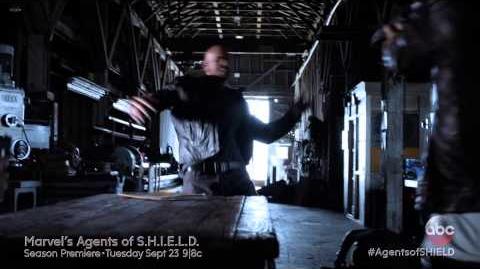