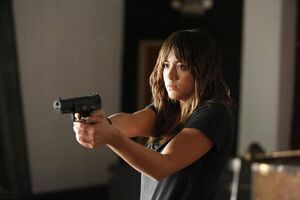 Episode Title
"What They Become"

We finally get to find out what we become.

Appearing in "What They Become"

Synopsis for "What They Become"

The Bus (carrying May, Triplett, Hunter, and the Koenigs) try to get away from Hydra's jets after handing over Raina and Skye to Grant Ward. Agent May notices the jets are flying back at them and realizes they are about to be shot down. Using the Bus' decoys and cloaking technology, they are able to escape. They regroup with Coulson in Puerto Rico, where he Morse, and FitzSimmons are about to enter the tunnels that lead to the alien city, and inform him about what happened with Skye. FitzSimmons meanwhile try and figure out how to save Mack, theorizing the city might only be using him to protect it from those it does not want to enter.

Meanwhile, Ward is taking Skye, his prisoner, through Hydra's base in Puerto Rico where they are attempting to drill into the city. Ward insists he is not loyal to Hydra, but only captured her to fulfill a promise. He cuts her out of her ties and opens a door to reveal her father. Ward gives them time alone, and Skye's father introduces himself to his daughter as Cal. Skye at first wants nothing to do with him because he kills people and works for Hydra, but Cal says he was only working with Hydra because they had the means to reunite the two of them. When she tries to leave, Cal tells her she is exactly where she needs to be to transform and fulfill her destiny. Skye then asks about what happened to her mother, and Cal tells her the story of how Daniel Whitehall had her butchered. He then promises his daughter he is about to kill Daniel Whitehall and have the best day ever. He and Ward meet with Raina in the chamber where Hydra has their plasma drill. Dr. Whitehall and Agent 33 enter soon afterwards, congratulates them all on their success, and then asks Ward why he brought Skye back with him. He then has Skye escorted into the room by heavily-armed Hydra guards, and he forces her to pick up the Obelisk. She grabs it and it lights up like when Raina grabbed it earlier, but she attacks one of the Hydra guards with it. She, her father, and Ward open fire on Hydra, but they are outnumbered.

Dr. Whitehall has Ward and Skye tied up and a shock collar put in Cal's neck that he can use to paralyze him. While Ward tries to talk Agent 33 into letting him go, a gunshot forces her to leave her watch and put another Hydra guard on them. Coulson, May, Hunter and Bobbi have barged into Hydra's location in an attempt to prevent them from reaching the city. Ward tries to get the new guard to let him go, but Cal uses the distraction to kill him anyway. Ward wants him to untie him, but Cal leaves both Ward and his daughter behind because he needs to do this alone and doesn't want Skye to see what he does to Daniel Whitehall. He eventually finds Whitehall in the commotion, and just as Whitehall points a gun at him he is shot from behind by Agent Coulson, killing him. Cal is furious Coulson would take his revenge from him and starts attacking him. Meanwhile, Ward has gotten out of his ties and begins cutting Skye out of hers. Once she is free and Ward turns her back to him, she shoots him. Agent 33, who is devastated over the death of Dr. Whitehall, eventually finds him, and Ward offers to get them out of there and figure out what to do next. Skye finds her father viciously beating Coulson and asks him to stop. When he doesn't Skye points her gun at him and threatens to shoot. He gets off of Coulson and promises to leave, and says goodbye to her daughter and calls her by her real name "Daisy."

Meanwhile, Raina has made her way into the tunnels that lead to the city. Skye goes in after her to prevent her from placing the Obelisk inside the temple and unleashing whatever power it has. Coulson goes in after her. Raina comes across Mack, who is still alive despite his fall, and he leads her deeper into the ruins. Triplett has also entered the city to place bombs throughout to destroy it and prevent its powers from falling into Hydra's hands. Skye finds Raina at the temple as she is about to put the Diviner in place. Once she places it on the altar, the walls of the temple start to move. Trip runs into the temple as it is closing, trapping him inside with Skye and Raina. Coulson is left outside with Mack, who starts to attack him. The Obelisk opens to reveal a crystal inside, and a strange mist pulses out of the crystal. Skye and Raina start to turn to stone, while Triplett is unaffected. Skye calls out to Trip for help, who can do nothing else but smash the crystal, causing it to explode. Skye and Raina have already turned completely to stone, and now Triplett, impaled by several shards of the crystal, began to petrify as well. However, Raina and Skye start to hatch, revealing their "changed" forms inside. Skye was unchanged to outward appearances, while Raina exhibited numerous tiny barbs protruding from her face. Skye watched horrified as her seismic abilities emerged for the first time they crumbled the statue that had been Triplett into dust. The pulse also generated an earthquake.

Elsewhere, a man takes out another Diviner, which is glowing. He makes a phone call saying there is "someone else," and that he is on it. The man has no eyes.

This is the midseason finale of the second season of Marvel's Agents of S.H.I.E.L.D.

Retrieved from "https://marvel.fandom.com/wiki/Marvel%27s_Agents_of_S.H.I.E.L.D._Season_2_10?oldid=5469579"
Community content is available under CC-BY-SA unless otherwise noted.