"Who You Really Are" 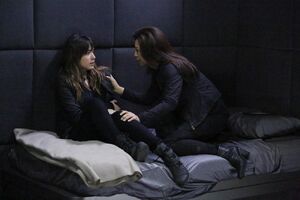 Episode Title
"Who You Really Are"

These creatures are weapons.

Appearing in "Who You Really Are"

Synopsis for "Who You Really Are"

Lady Sif, dressed in human clothes, washes ashore on a Portuguese beach. She approaches three people camping out on the beach. She is completely unintelligible to them, only rambling on about someone named "Kava." When one of the three tries to help her, she pushes him away with her full strength.

At the Playground, Fitz interrupts a training session between May and Skye. He's concerned about how Skye has changed since her transformation, but she reassures him she's doing fine before May scares him off. Meanwhile, Coulson tells Mack he wants to promote him to a field agent to make better use of his imposing appearance. Agent May then informs the Director that they've received a message from one of their contacts in Portugal saying they have Lady Sif in their custody. The whole team flies to Portugal to look into her reason for being on Earth. Unfortunately, she has no memory of why she is on Earth, why she is in human clothing, or who she is at all. Although this appears to be a dead end, Skye finds a video on Twitter of Sif fighting on a dock with a strange man they believe to be the "Kava" she is looking for. Bobbi and Skye go to a nearby hospital to see if the man is being treated there while the rest of the team goes to the dock to look for any clues as to his identity. Simmons runs an analysis on a tissue sample from Kava, but discovers it is in fact liquid nitrogen; however, no one knows why the man might have needed liquid nitrogen. At the hospital, Bobbi and Skye find Kava, who is now completely blue-skinned, using liquid nitrogen to change the color of his skin to that of a Caucasian human's. He attacks the two of them, but before Skye can fire a shot she starts generating tremors that rip apart her gun and allow Kava to get away.

The team regroups on the Bus. Now that they know the man is a Kree, Sif realizes "Kava" is not his name but is the Kree word for "Keys." They see he is headed towards a Portuguese city called "Chaves," the same place where Daniel Whitehall found the SSR, and they corner him while he is leaving a cave while dragging a large crate. S.H.I.E.L.D. takes the Kree into their custody and begin questioning him aboard the plane. He reveals his name is Vin-Tak and claims he is there to help. He also says he only took Sif's memory away from her so she would stop tracking him, and that he could restore it if he could have access to his truncheon. Coulson gives him the opportunity to prove he is friendly once they get back to the Playground. However, the Vin-Tak kicks his truncheon out of Coulson's hands and jabs Sif with it, but suddenly drops it and holds his hands up. Sif recovers with her memories in tact. She reveals Odin sent her to Earth when Heimdall saw a Kree arrived on Earth; Asgardians, by nature, do not trust Kree due to their long history of war. Vin-Tak, however, says he came to Earth because he received an ancient signal indicating that someone on the planet had underwent Terrigenesis. He goes on to explain that a faction of his people came to Earth thousands of years ago to genetically modify early humans into becoming their weapons. The modifications would be activated if they came into contact with Terrigen crystals, which were stored inside the Diviners. However, the modified humans proved to be too powerful, so the other Kree came to Earth and shut the project down, but left behind a collection of Terrigen crystals large enough to create an army. If the Kree Empire were to learn of the success of the experiments, they'd be likely to renew them.

At this time, Simmons, who was studying the crate with Fitz, discovers it is completely empty, and lets Coulson know of her find. Vin-Tak says his worst fears have come true, and they must find the remaining Diviners and anyone else they transformed. Coulson tells Sif and Vin-Tak that Skye was there when Raina transformed. They start asking her questions about what she saw, but she gets uncomfortable when Vin-Tak says the transformations are not always physical. The room starts shaking, and they realize that Skye was indeed transformed like Raina. Vin-Tak wants put her down and Sif wants to take her back to Asgard, but Coulson refuses to hand her over. May runs away with Skye and hides in the Playground's jail cell. The two aliens overpower Coulson and chase after them. Bobbi distracts the Kree away from Skye, and lures him into a trap where Fitz shoots him with the Destroyer Gun before she takes away his memory with his truncheon. Sif, however, catches up to May and Skye, and attempts to break into the cell. May tries to get Skye to control her emotions, but with no success. Once Sif gets through the wall separating them, Skye grabs May's I.C.E.R. and knocks herself out, stopping the tremors.

The next day, Sif and Vin-Tak, whose memories are slowly coming back to him, take the Bifrost back to Asgard, where the Asgardians will make sure he returns to the Kree homeplanet of Hala. Back at the playground, Simmons, Mack, Bobbi and Hunter confront Fitz about hiding Skye's transformation from the rest of them. Skye defends his and Skye's decision not to come forward, citing Simmons' calling the transformation a "plague that needed to be eradicated," and how they should be protecting Skye. Mack argues back that really it's them that all need to be protected from her, a statement Skye overhears him say. Since the team no longer trusts her, Skye locks herself inside the isolation unit on the Bus. Some time later, Hunter confronts Mack about the secret he and Bobbi are hiding from the rest of the team, but Mack puts Hunter in a sleeper hold that knocks him out.

Retrieved from "https://marvel.fandom.com/wiki/Marvel%27s_Agents_of_S.H.I.E.L.D._Season_2_12?oldid=5505943"
Community content is available under CC-BY-SA unless otherwise noted.