"Love in the Time of Hydra" 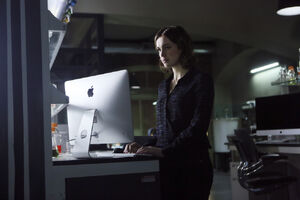 Appearing in "Love in the Time of Hydra"

Synopsis for "Love in the Time of Hydra"

Grant Ward and Agent 33, who have been on the lam since the events in Puerto Rico, hold up a diner. Rather than taking any money, the two of them kidnap one of the diner's patrons - a doctor. They take him back to the hotel room they've been staying in and have him do work on the nanomask covering Agent 33's face. He manages to repair it, giving her the ability to copy anyone's face over her own. However, she doesn't want to take the mask off due to the scarring she received in her fight with Agent May, and she cannot make the mask project her face without a picture of her from before she was scarred. Agent 33 cycles through a few different faces before settling on Skye's, which she uses to try and "thank" Ward for all he's done for her. Ward rejects her advances, and says that he's over Skye ever since she shot him in Puerto Rico. Instead, Ward plans for the two of them to get their hands on Sunil Bakshi.

At the Playground, Coulson considers what to do with Skye. Dr. Garner suggested that she be removed from active S.H.I.E.L.D. duty, and May agrees. Coulson is hesitant to do anything with her since he puts so much faith into her, but he eventually decides to move Skye into an isolated cabin Fury used to house superpowered individuals. Before he leaves, Coulson gives Skye a pair of gloves Simmons built that will minimize the effect of her powers. Meanwhile, Lance Hunter is being introduced to the "real" S.H.I.E.L.D. Mack and Bobbi work for. They are a group of former agents who emerged from the rubble of Fury's organization, such as Bobbi, the head of S.H.I.E.L.D. Academy Anne Weaver, and their apparent leader, Robert Gonzales. They believe Coulson is unfit to lead the organization, that he needlessly endangers his agents such as Triplett and Izzy Hartley in search of alien technology he discovered through visions in his head. Gonzales wants Hunter held at their location until they can take Coulson out, removing him from the situation until he chooses to join them. Hunter, however, managed to escape the facility during a fight, and, discovering the "real" S.H.I.E.L.D.'s base is out at sea, takes a helicopter back to the mainland. Because of this, Gonzales makes Bobbi reaffirm her allegiance to their cause, since she easily could have prevented Hunter's escape if she wanted.

Meanwhile, Ward and Agent 33 break into the Air Force base where Bakshi is being held prisoner. Agent 33 uses her mask to impersonate Brigadier General Talbot's wife Carla, but their ruse is discovered when the real Carla Talbot calls her husband to tell him she's stuck in traffic. Talbot has his assistant round up the female officers on base so he can expose the mole, but really Agent 33 has since taken the disguise of one of the male soldiers stationed at the base. Ward knocks out one of the security guards and takes his keys, and the two of them go to Bakshi's cell. Bakshi at first believes Hydra sent Agent 33 to rescue him, but once he sees Ward he realizes something is wrong. Agent 33 knocks him out, and they take him back to their hotel room, where Bakshi is subjected to the same method of psychological torture Dr. Whitehall used to brainwash Agent 33. With her confidence in herself restored, Agent 33 takes off the mask to reveal her scarred face beneath.

Like this? Let us know!
Retrieved from "https://marvel.fandom.com/wiki/Marvel%27s_Agents_of_S.H.I.E.L.D._Season_2_14?oldid=6498138"
Community content is available under CC-BY-SA unless otherwise noted.