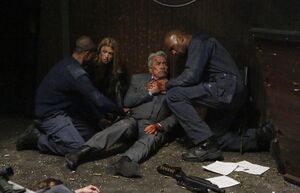 Appearing in "One Door Closes"

Synopsis for "One Door Closes"

On the day S.H.I.E.L.D. fell, a Hydra double-agent held Mack and his team of mechanics hostage. One of the mechanics, Tim, pretends to be the leader of the team, but Mack stops him from giving himself over to protect him. The Hydra agent kills Tim for his dishonesty. Before Mack can do anything, Bobbi Morse and Izzy Hartley storm the room, kill the Hydra agents, and free Mack and the hostages. Agent Morse tells Mack Nick Fury left them orders to save S.H.I.E.L.D. Later that day, they board a S.H.I.E.L.D. aircraft carrier that had been attacked by Hydra. They find Commander Robert Gonzales wounded but alive. Mack tries to comfort him as another agent puts his leg back in place. Bobbi hands a memento to Hartley and tells her to give it to Hunter. She then tells Mack to get Gonzales to the surface while she heads to the server core to sink the ship. Everyone else disagrees, and Gonzales, the ranking officer on the ship, orders her to bring all of them with her to the server core to finish the fight.

The team finds Izzy Hartley fighting a team of Hydra agents while on the way. She tells them there are still many S.H.I.E.L.D. agents on board fighting Hydra, and she joins their mission to the server core. Once they make it there and clear the room of Hydra agents, Mack stops Bobbi from destroying the ship moments before she gets into the servers. Mack thinks they have an obligation to protect the S.H.I.E.L.D. agents putting their lives on the line. Gonzales agrees, and orders Bobbi to ignore Fury's orders.

In the present day, Coulson has Mack look under Lola's hood. Agent Morse takes the opportunity to steal Fury's toolbox from Coulson's office. Coulson confronts him about the extra component he put in the model of Lola in his office, revealing he knows about Mack's deception. However, Coulson thinks Mack works for Hydra, so he is confused when he swears he only works for S.H.I.E.L.D. Meanwhile, Agent May finds Bobbi in Coulson's office and holds her at gunpoint. Agent Morse gets away from her by jumping through the glass behind Coulson's office and making a break for it. Just as Agent May catches up to her, Bobbie activates an EMP that shuts down all the electronics in the Playground. Both Bobbi and Mack take the opportunity to escape from Coulson's agents. Fitz goes to the facility's servers to try and get the power back on. Agent Morse goes to the locker room, but finds Simmons, who she thinks is oblivious to her motives. Simmons tricks her into holding two batteries that when touched together create a shock that knocks her out.

Skye meanwhile tries to adjust to life in the remote cabin Coulson left her in. She pulls a wood panel away from the wall, revealing a wall made of the same material as the Cage with a large dent in it (which came from Bruce Banner). She starts hearing sounds coming from outside, but finds nothing when she goes to investigate. Out of nowhere, there's a knock on her door. Skye opens it to find Gordon, the Inhuman that recently took away her father and Raina, at her door, and she lets him inside. Gordon says that she should revel in her powers rather than be ashamed of them, and that he could take her to a place where she can learn to control them. Skye doesn't want to go with him, so Gordon leaves telling her he will be back when she's ready to go.

Coulson and his team try and find out what Bobbi and Mack's plans are. May finds a gasmask in Agent Morse's locker. Before she can inform Coulson on what she found, a gas starts pumping through the Playground's vents. Mack has also made his way to the servers, only to find himself confronted by Fitz. However, Mack is trying to get Fitz to stand down only because Robert Gonzales and his faction breach the Playground's walls behind him. Gonzales' agents swarm the facility, taking Coulson's agents as their prisoners. May, however, manages to evade them. She goes to the cockpit of the Bus and warns Skye of the S.H.I.E.L.D. agents loyal to Gonzales coming for her. Gonzales meanwhile heads to Coulson's office and has his men bring the Director to him. While Coulson and Gonzales argue over Coulson and Fury's abilities as director, Agent May takes out Gonzales' guards and Gonzales himself with an I.C.E.R. She cuts Coulson free, hands him a briefcase, and puts him in a secret elevator in the office before telling him to find Skye.

The power at Skye's cabin is cut moments after she receives May's warning. Agents Morse and Calderon lead a team of agents loyal to Gonzales to the cabin to neutralize Skye, who they deem a threat to the organization. Skye, however, has already left the cabin, but is confronted by a couple of agents at the border of the cabin's laser grid. Bobbi and Calderon hear the commotion and make their way towards Skye. As Agent Calderon fires a bullet at her, Skye loses control of her powers. The pulse that she gives off throws both Morse and Calderon, and obliterates a nearby tree. One shard of wood impales Agent Calderon. Skye, horrified at what she's done, calls for Gordon, who takes her away.

Coulson eventually finds himself on a tropical beach. Lance Hunter sits down next to him, and accepts Coulson's offer to be a full-time agent of S.H.I.E.L.D.

Retrieved from "https://marvel.fandom.com/wiki/Marvel%27s_Agents_of_S.H.I.E.L.D._Season_2_15?oldid=5258413"
Community content is available under CC-BY-SA unless otherwise noted.