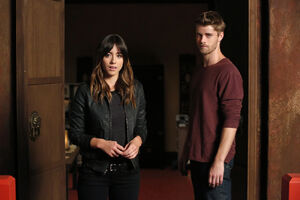 Skye wakes up in a bed covered in what appear to be acupuncture needles. Gordon is next to her and calms her down, and another person enters the room. He introduces himself as Lincoln, and that as Skye's "transitioner," he was selected to help Skye smoothly adjust to life since undergoing Terrigenesis. Lincoln shows her around the place Gordon brought her, which they call "Afterlife." People with the genetic marker recognized by Diviners are brought there to await Terrigenesis, but only a few are ever selected every year, making both Skye and Raina something of an oddity to the others. Lincoln shows Skye his gift from Terrigenesis, the ability to generate static electricity, in an attempt to get her to reveal her power to him. However, Skye runs off when he accidentally reveals Raina is also somewhere in Afterlife. Skye finds her in another hut, and is horrified by Raina's physical transformation. She tells Raina that her hideous outlook was what she deserved and blamed her for her own transformation and Trip's death; Raina retorts that Skye went into the Kree city of her own volition and provokes her by claiming they are both the same, inside and out. Skye then unleashes her power on Raina, before Jiaying, Skye's mother (who is somehow alive again and with scars on her face) breaks them up. Skye refused to remain so long as Raina was present, but Jiaying asks for a few days to teach her to control her powers and if she's not satisfied she can leave. Some time later, Gordon takes Jiaying to see Cal, who is still locked up in a room with no doors or windows since Gordon took him away. They share an emotional embrace over their daughter's change, but Jiaying denies Cal's request to see her.


Coulson and Hunter arrive at the Retreat in a stolen jeep. They take notice of the debris in the area left from Skye's encounter with Gonzales' agents, and discover it was all Skye's doing when they watch security footage of the previous night. That night, they talk over their options, none of which seem to be any good. Hunter suggests that maybe they should go with one of the bad options. The next morning, Hunter is awoken by the sound of engines outside. Coulson purposefully activated the cabin's security to alert Gonzales to their presence so they could steal one of his quinjets. Hunter has no idea how his new boss plans on actually taking one of them, but Coulson assures him he has backup coming. However, Gonzales' agents brought a battering ram with them, getting them inside the cabin (which was built to withstand the Hulk) sooner than expected. Coulson uses a device inside the Howling Commandos' kit Trip and Fitz made for him to surprise Gonzales agents and allow Coulson and Hunter to steal their uniforms. They walk over to a quinjet disguised as Gonzales' agents, but agents in another, cloaked quinjet surround them. The agents take Coulson and Hunter into their custody, but before they take off, the quinjet comes under attack by Mike Peterson, Coulson's backup. Since Coulson took over as director of S.H.I.E.L.D., he has had the now-Agent Peterson follow Dr. List, uncovering Hydra's recent desire for enhanced individuals. Agent Peterson hijacks the quinjet for Coulson, and they set off to find the one person connected to both sides of the conflict between S.H.I.E.L.D. and Hydra and would devote himself to find Skye - Grant Ward.


Commander Gonzales and the "real" S.H.I.E.L.D. take command of the Playground. Following his own agents' failures, Gonzales has Agent Morse try and convince Fitz and Simmons to open Fury's toolbox for him. Fitz vehemently refuses and prepares his things to leave the Playground. Simmons, however, is more agreeable, and tells Bobbi that the toolbox doesn't open mechanically, but only to Coulson's genetic signature. Although she tries everything she can to get the toolbox to open, she completely fails at it. Meanwhile, Gonzales tries to get Agent May on board with his goals. He first tries to convince her into seeing things his way about Coulson and enhanced individuals, but May stonewalls him, arguing that S.H.I.E.L.D. should be focusing their attention on Hydra, not a witch hunt. Later, on Agent Morse's recommendation, Gonzales gives up on trying to sway her, instead offering her a seat in his inner circle to be an advocate for Coulson when his agents apprehend him. He also hands her a gun, telling her to shoot him if she still thinks he's a traitor. May turns down the offer and tosses the gun back to him, disappointed Gonzales would think she would actually believe the gun was loaded. However, Gonzales shows her the gun was actually loaded, causing May to rethink joining him. At this time, Fitz leaves the Playground despite Mack's attempts to get him to stay. Fitz enters a taxi and looks through his bag for something to eat, and finds Simmons swapped out the toolbox for a fake and gave him the real one.

Retrieved from "https://marvel.fandom.com/wiki/Marvel%27s_Agents_of_S.H.I.E.L.D._Season_2_16?oldid=5696030"
Community content is available under CC-BY-SA unless otherwise noted.