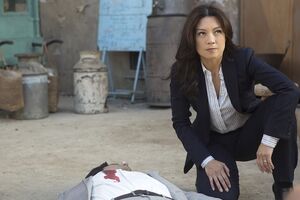 The Cavalry came in after all...

In 2008, Melinda May and Phil Coulson were assigned to a mission to assess a potential gifted person in Bahrain. Should things go south, Agent Hart will call in a team of heavily armed TAC agents, "the Cavalry."

Coulson tries to convince their target, Eva Belyakov, to come with him, but when he asks her what she wants, she only says "to feel his pain" and attacks him. A group of armed thugs help her get away and take a small girl hostage as they make their escape. "The Cavalry" follows them into a building to subdue Eva and rescue the young girl. Coulson and May listen on in a van and hear the activity in the building go silent. They hear sirens nearby, and Coulson sends May inside after the S.H.I.E.L.D. agents while he keeps the locals busy and away from Eva. May calls Andrew, who she was still married to at the time, before she goes in.

Once inside, May finds Agent Hart and his team in a hypnotic state. They surround her and say they want to feel her pain. Agent May fights her way out of them and goes to look for the little girl, but instead finds Eva Belyakov. She fights May with an inhuman strength. May however impales Eva on a broken piece of furniture, killing her. However, the hypnotized agents do not return to normal, and May soon discovers the young girl is controlling them all. Little do they know the girl is Eva's daughter Katya, and she has the ability to drain the emotions from a person with a touch, living off them like a parasite. Katya holds out her hand for May to grab and giver her her pain.

Left with no other choice, May grabs the gun behind her and kills the girl. Coulson, who was keeping the Bahraini army busy the whole time, rushes into the building when he hears the gunshot. He finds the bloodied May holding the girl's corpse. May was traumatized from the event, grew emotionally distant from Andrew, and soon after asked Maria Hill to be moved to a desk job. The members of Hart's team called May "the Cavalry" for how she took down so many of them, giving her the nickname she would despise until the present day. Meanwhile, Jiaying and Gordon watch these events from afar, as Eva and her daughter were both Inhumans who had defied Jiaying's orders.

In the present day, May was aboard the Iliad, the headquarters of the "real" S.H.I.E.L.D., after accepting Gonzales' offer to join his inner circle. Agents Morse and Weaver confront her over what she knows about Project Deathlok and the Theta protocol.

Although she knew Coulson had some relationship with Mike Peterson, she truthfully has no idea what the Theta protocol is. May returns to the Playground and asks Simmons if she knows about the Theta protocol, but instead finds out Simmons didn't even know she was working on parts for Agent Peterson.

They eventually uncover Coulson has been operating a large number of shell corporations and burning through money, and that he has even been meeting with Dr. Garner in secret. Mack reveals they believe Coulson is building another base for powered people so he can train and exploit them. May orders Simmons to open Fury's toolbox.

Meanwhile, Fitz manages to get the Toolbox open in a public restroom, and contacts Coulson with his findings. He doesn't know what to do next since he correctly believes the "real" S.H.I.E.L.D. is following him in hopes he will lead them to Coulson. Coulson and Hunter tell Fitz not to worry, and they're coming to get him.

At Afterlife, Skye begins her training under Jiaying. She has Skye cause an avalanche on a nearby mountain and hold a musical note to teach her to control the vibrations everything gives off. Just as she thinks Skye could settle in at Afterlife, she goes into her troubled history with foster homes.

When she says she doesn't even know what her birthday is, a heartbroken Jiaying reveals to her that she is her mother. However, she tells Skye to keep this a secret from everyone else at Afterlife, since they might find her too much of a threat and lose faith in Jiaying's judgment. To emphasize her point, she tells Skye the story of Eva Belyakov and her daughter Katya (which Skye realizes the history also told how May became known as The Cavalry), to show how far a woman might go for her daughter.

Meanwhile, Lincoln interrupts a session between Gordon and Raina that is going poorly. Lincoln tries to intervene, but Gordon brushes him off since Lincoln didn't undergo a physical transformation like he and Raina had. Once Gordon leaves, Lincoln tells Raina he could help her sleep, but she says her real problem are the vivid dreams she's been having. One of these is of Skye and her father having a dinner nice dinner with her father. Later that day, Jiaying arranges for her, Cal, and Skye to meet. Cal is grateful they would give him another chance, but instead Skye thanks him for causing her to reunite with her mother. Cal gives his daughter a bouquet of daisies and starts to tell her the story of the day she was born (which leads to Skye finding out she is a year older than she thought) over dinner. Lincoln sees this, and realizes Raina's dreams are actually visions.

Retrieved from "https://marvel.fandom.com/wiki/Marvel%27s_Agents_of_S.H.I.E.L.D._Season_2_17?oldid=5604946"
Community content is available under CC-BY-SA unless otherwise noted.