"Frenemy of My Enemy" 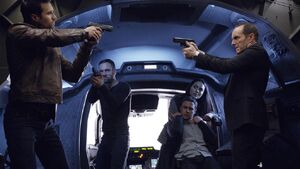 Episode Title
"Frenemy of My Enemy"

Appearing in "Frenemy of My Enemy"

Synopsis for "Frenemy of My Enemy"

Coulson, Hunter, and Agent Peterson pick up Fitz in San Francisco, narrowly escaping the agents loyal to Gonzales following him. Coulson catches him up on Hydra's interest with Enhanced individuals, and on their plans to recruit Grant Ward back onto their side. They find Agent 33 in Tijuana (she had recently received a photograph from her mother of herself before she was scarred, and used it to restore her face), and Coulson uses her to lure Ward to them. He sits down with Coulson after Agent Peterson forces him to surrender his weapons. Coulson gives Ward an offer: help him take down Baron Strucker, and, in return, Coulson will let Ward go free. However, Ward would have to first go through the T.A.H.I.T.I. protocols to wipe his memory clean, giving him the chance to start over as a good person. Ward agrees, and he hands Coulson the thing that will get him close to Strucker - Sunil Bakshi.

Jiaying prepares for Gordon to take Cal away from Afterlife. Skye, seeing her father's emotional instability, begs her mother to keep Cal there, saying letting him loose in the world would put too many people's lives in danger. Jiaying says she has no concern for people not like her, but does agree to allow Skye to go with him for a while. Gordon drops the both of them off in Milwaukee, where Cal used to operate his doctor's office. Before they go to his old office, Cal wants to show his daughter around the city, but is disappointed to find many of those shops are now gone. Skye has her father go into a liquor store to see if they have any ice cream, and takes the opportunity to call Coulson so S.H.I.E.L.D. can take him into their custody before he can hurt anyone. However, Skye is unaware that Coulson has been on the run since Gonzales' agents took the Playground, so when May answers her call, she unknowingly gives her location to the very people hunting her.

Meanwhile, Coulson and Ward organize a meeting between Bakshi and Dr. List, Baron Strucker's right-hand man. They have faith in Bakshi's ability to talk his way out of a tough situation, but also have Agent Peterson go in with him disguised as his bodyguard so they can watch the meeting through his cybernetic eye. Dr. List asks Bakshi how he got away unscathed when the other Hydra heads competing for Dr. Whitehall's position were all killed, to which Bakshi says he was captured and Agent Peterson, while posing as a government agent, helped him escape from government custody. He then goes off-script and offers Agent Peterson, an Enhanced individual that might be of some value to Hydra, to Dr. List. Coulson, Hunter, and Fitz believe they have been double-crossed and Coulson pulls his gun on Ward. Agent 33 holds Fitz hostage. Ward explains his to Coulson that the only way to get to Strucker is through an Enhanced person, so Coulson has Fitz relay the order to Agent Peterson to follow along with Bakshi's plan.

Dr. List's plane takes off for Baron Strucker's headquarters in Eastern Europe, but first they make a stop in the Midwestern United States. Dr. List has been following "quantum entanglements" they believe come from an Enhanced, which Fitz deduces must be something the teleporter who took Cal leaves behind. Meanwhile, Cal is finally showing Skye around his doctor's office, located in an abandoned building he still owns. She sees the name on his door is "Calvin L. Johnson," and realizes her full name is "Daisy Johnson." Cal shows her his medical tools, handed down to him from his grandfather, a veteran of World War II, and he tells her how he used them to help put Jiaying back together. Skye tries to convince her father to let go of the life he lost and to move on, but they are interrupted by Lincoln, who Jiaying sent to make sure Cal hadn't done anything to Skye. Cal is furious at this display of distrust, and attacks Lincoln once he calls his daughter "Skye." Before Cal can do anything to him, they find themselves under attack by heavily armed agents which Cal thinks are S.H.I.E.L.D. Skye, however, recognizes the agents are Hydra.

Cal tells Lincoln to get her out of there and meets the Hydra agents head on to give them a distraction. Lincoln instead tells Skye to get out of there on her own while he helps her father fight off Hydra. Agent Peterson, who went in with Hydra, sees Skye in her escape, so Coulson goes in with Ward, Hunter, and Agent 33 to recover her. Lincoln meanwhile fights Agent Peterson to a stalemate, as he can simply absorb the electricity Lincoln gives off. Ward and Coulson go ahead to find Skye while Hunter and Agent 33 stay behind to hold off Hydra, and Hunter is shot in the leg. Coulson and Ward see Peterson throw Lincoln out of a room, and he points them in Skye's direction. At the Playground, Simmons has hacked into Deathlok's eye just in time to see Coulson and Ward working together. Bakshi soon after captures both Lincoln and Agent Peterson for Hydra. Coulson and Ward meanwhile catch up to Skye just in time to see Gordon take her away, along with Cal who jumped into Gordon's energy field just in time to be taken with them. Agent 33 and the wounded Hunter regroup with them, and Ward asks Coulson what they should do next. Bobbi and Mack arrive at the scene some time later, and Coulson gives himself up to them.

Retrieved from "https://marvel.fandom.com/wiki/Marvel%27s_Agents_of_S.H.I.E.L.D._Season_2_18?oldid=5696031"
Community content is available under CC-BY-SA unless otherwise noted.