"The Dirty Half Dozen" 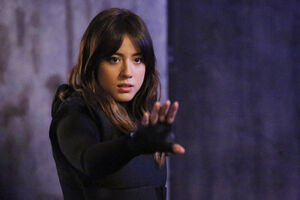 Episode Title
"The Dirty Half Dozen"

We finally got the team back together.

Appearing in "The Dirty Half Dozen"

Synopsis for "The Dirty Half Dozen"

Raina wakes up after seeing a graphic vision of Skye, S.H.I.E.L.D., Hydra, and the Inhumans in her dreams. Jiaying, having heard the commotion in her room, is there to talk to her about what she saw. While Raina describes to her what she saw, they hear Cal outside screaming for Jiaying. She tries to calm him down, but in his rant Cal reveals to the people at Afterlife that he is her husband and Skye their daughter. Gordon goes back out to find Lincoln, but he soon comes back with a gash across his forehead. He tells them Hydra has Lincoln, and there is nothing they can do to get him back.

Coulson comes face to face with Gonzales on the Bus. Coulson thinks the two of them to work together to stop Hydra's experiments on Gifteds. Hydra currently holds Agent Peterson as their prisoner at one of their bases in the Arctic Circle, and Coulson wants to launch a mission to rescue him. Gonzales at first doesn't trust him, but agrees to put Coulson's plan to a vote once he offers to open Fury's toolbox for him to use. The Bus arrives at The Playground with the quinjet carrying Fitz, Hunter, Ward, and Agent 33. Bobbi Morse, May, and the rest of Gonzales' men are incredibly nervous around Ward, and Bobbi puts a team of agents on him at all times. Fitz, now reunited with Simmons, tells her of how Hunter had to hold him back when he attacked Ward on the plane, embellishing the story. Simmons responds with her own method of getting back at Ward - splinter bombs. Unlike Fitz, Simmons wasn't joking. Meanwhile, Gonzales takes Coulson, Morse, and May to his office and brings up video feed from Agents Weaver and Oliver. Gonzales puts Coulson's plan in front of them. He and Agent Morse want to go along with it, but Weaver and Oliver shoot it down. May, with the deciding vote, agrees to Coulson's plan after talking to him in private.

Back at Afterlife, Skye pleads with her mother to try and rescue Lincoln from Hydra. Jiaying reminds her daughter that she knows all too well what Hydra does to people like them, and that she's been carrying a reminder of that with her for the past 20 years. Skye then turns to Gordon to take away to rescue Lincoln anyway, but he, too refuses. However, Raina interrupts them to say Skye might actually be able to handle this. She shares her earlier vision with them. Skye is convinced the vision is real when she shares she saw Coulson working with Ward, the same thing she saw herself in her father's office. Since they now know S.H.I.E.L.D. is also going after Hydra, Gordon takes Skye to the Playground, and leaves her on the Bus. Meanwhile, Coulson, May, Ward, and FitzSimmons suit up and board the Bus to go to the Arctic Circle and take down Hydra. Despite her objections, Agent 33 will stay behind so S.H.I.E.L.D. can track her and attempt to bring back her memories from before Dr. Whitehall brainwashed her. They hear noise coming from elsewhere on the Bus, and they all pull their guns on Ward thinking he's again betrayed them. They out their weapons away when they find out its Skye, leading Ward to comment on how the team's back together. Coulson lets Ward update them on their information from Bakshi, but sensing the tension in the room, Ward breaks down and tries to apologize to them for being responsible for the break-up of their team, their "family". None of them accept Ward's apology, and continue to wish he was dead.

Hydra notices the Bus closing in on their location and shoots it down. This was part of the plan, and the team lands near the Arctic base in a quinjet disguised as debris. They break into the base and are quickly met by Sunil Bakshi, who recently killed a Hydra agent following him. Bakshi asks Ward what he should do next, clearly showing signs he is fully under his control through the Faustus method. Ward, Skye, Simmons, and Bakshi go to rescue Agent Peterson while Coulson, May, and Fitz take down Hydra's defense grid so Gonzales' jets flying nearby can reduces the place to nothing but a pile of rubble. Dr. List is evacuated from the facility when Ward's team barges into the control room, and Ward gets to see Skye's new powers in action. They then find Agent Peterson with his eye ripped out and his cybernetic leg destroyed. He tells them Hydra moved another prisoner, Lincoln, shortly before they arrived. Skye heads off on her own to find him, and after taking out the Hydra operatives guarding the room, she finds Lincoln dead on the operating table. Skye uses her powers to jumpstart his heart, resuscitating him. Meanwhile, Simmons arms a splinter bomb and prepares to throw it at Ward. Bakshi notices this, however, and he grabs the bomb and attacks Simmons. The bomb gets attached to Bakshi, digs into his shoulder, and his body dissolves into dust. Ward, surprised that Simmons would attack him like this when they're on the same side, pulls his gun on her. Simmons prepares herself for Ward to kill her, but he only says he's disappointed in her and leaves. May and Coulson gets Fitz to a computer where he can shut down the base's missile defense. Before Fitz is finished and Gonzales' team levels the base, Coulson downloads information off one of Hydra's computers.

They arrive back at the Playground with Agent Peterson and Lincoln but without Ward. Ward soon calls Coulson, and tells him that even though he was never going to let them take his memories away they should use the T.A.H.I.T.I. protocol on Agent 33 to give her a normal life. Gonzales is satisfied that they not only have in their custody the two Gifteds they rescued from Hydra but also Skye. Coulson opens up the Toolbox for Gonzales and Morse, telling them they should expect an angry call from Fury when he finds out they're looking through it (also revealing to them that the former Director is still alive). He leaves them to answer a call from Maria Hill. He updates her on the information he retrieved from Hydra's computers - they have Loki's sceptre in Sokovia. Hill asks him if the Theta Protocols are ready, and Coulson tells her it's time to bring in the Avengers. Back at Afterlife, Jiaying confronts Raina about using her vision to convince Skye to rescue Lincoln with S.H.I.E.L.D. Earlier, after Cal apologized for his tirade he told her Raina was deceptive and not to be trusted. Jiaying lets her know that from now on all she will make all of the decisions based on the visions. Raina resists and instead questions her authority. However, she is soon overcome with a painful vision of the sceptre and men made of metal tearing their cities apart.

Retrieved from "https://marvel.fandom.com/wiki/Marvel%27s_Agents_of_S.H.I.E.L.D._Season_2_19?oldid=5258405"
Community content is available under CC-BY-SA unless otherwise noted.