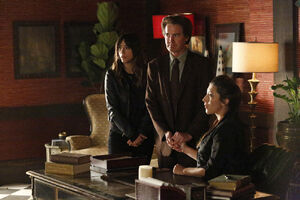 How dare you compare your scars to mine!

One year ago, Agent Sam Koenig updates Coulson on the status of the Theta Protocol - a new helicarrier.

In the present day, Coulson and Gonzales' board witness the aftermath of the events in Sokovia from the safety of the Iliad. Coulson unites the two factions of S.H.I.E.L.D. agents led by himself and Gonzales into one organization. Coulson will continue to lead S.H.I.E.L.D. as its director, but will be under advisement from Gonzales. Back at the Playground, Lincoln comes out of his coma and is Indexed shortly afterwards. All signs of the Faustus Method are erased from Agent 33's mind. At Afterlife, Raina grows more comfortable with her visions. She shares with Gordon one vision of a black rock in S.H.I.E.L.D.'s possession. Gordon recognizes this as an ancient weapon the Kree used to wipe out Inhumans and brings this information to Jiaying. She sends Raina and Gordon off to find the weapon. While they are gone, Jiaying talks to her Cal about his history with Raina. He tells her that Raina is manipulative and power-hungry, and that she always gets what she wants. Gordon teleports the two of them onto Gonzales' aircraft carrier, but soon come across Lance Hunter as he walks around the ship's corridors. Hunter sets off an alarm to alert the other agents to their presents. Gordon and Raina rush to the door she saw in her vision. Behind it, they find a tall, black rock that collapses into a liquid before forming back into a rock. Agents May and Morse corner them before the Inhumans can do anything with the weapon, and Gordon teleports them back to Afterlife.

Gonzales and Agent Weaver bring the rest of S.H.I.E.L.D. up to speed on the item located in their cargo bay the two Inhumans showed so much interest in. The item is very old and was found in a dig, and gives off energy signatures indicative of an extraterrestrial origin. Coulson takes most of the team back to the Playground to prepare for a confrontation with the Inhumans. Agent Weaver used Hydra's method of tracking the teleporter to discover the location of their base. While he and most of S.H.I.E.L.D. believe the Inhumans are interested in it because it is a weapon they want to use, Skye tries to convince him that they are just scared of it and worried that it might be used against them. Coulson doesn't back down, but does agree to take a more understanding approach with the Inhumans. He then sees Skye and Lincoln off, hoping that Skye will be able to talk her mother into peacefully meeting with S.H.I.E.L.D. and letting them put her people on the Index. Meanwhile, May puts Agent 33 in custody for the crimes she committed with Ward when they were no longer working for Hydra.

Gordon takes Skye and Lincoln back to Afterlife. Jiaying orders Lincoln to their recovery room to make sure S.H.I.E.L.D. didn't do anything to him while he was in their care. Skye tells her mother S.H.I.E.L.D. is coming to them. Raina has since tried to warn Gordon that Jiaying will do something and recommends she speak with Coulson instead. Jiaying however believes this is just a power play from Raina, and eventually decides to make Raina face justice. She then turns to Cal for advice to dealing with S.H.I.E.L.D. He tells her that while he doesn't like or trust any of them, Coulson does legitimately care for Skye. Cal suggests they could get S.H.I.E.L.D. to be more cooperative if he turns himself over to them when they arrive. Back at the Playground, Coulson shares his plan with Gonzales' board. Gonzales convinces Coulson to let him go in his place, citing Coulson's lack of objectivity when it comes to Skye. The rest of the board agrees, and Coulson lets Gonzales go in his place. Shortly before they leave, Mack leaves S.H.I.E.L.D. because he refuses to accept Coulson as S.H.I.E.L.D.'s director.

May and Bobbi leave earlier than the rest to scout the area. When Bobbi notices the quinjet is descending, Agent May reveals herself as Agent 33 in disguise and goes on the attack. Agent Morse takes her down after a short fight and the quinjet lands in an empty field. She leaves the plane, and is immediately taken out by Grant Ward with an ICER. Meanwhile, the real Agent May flies Gonzales, Weaver, and Simmons to Afterlife to speak with Jiaying. The Inhumans' leader is at first surprised that Coulson didn't go himself, but Cal hands himself over to S.H.I.E.L.D. anyway. The agents who take him aboard the quinjet ask him about a number of vials on his person containing a mysterious chemical. Gonzales appears to get to Jiaying by giving her a gift - a traditional Chinese gift Jiaying gave to her daughter when she was a baby recovered from Daniel Whitehall's possessions - and by trying to relate to her through their shared experiences with Hydra. However, Jiaying turns on Gonzales when she attacks him with a synthetic Terrigen Crystal created from a Diviner. She takes offense at Gonzales comparing his limp to what Whitehall did to her and swears the Inhumans will never give themselves over to S.H.I.E.L.D. The power of the crystal soon overtakes Gonzales, and he crumbles the same way Hartley and Trip did when they came into contact with a real Terrigen Crystal. Jiaying then pulls Gonzales' gun off his corpse and shoots herself in the shoulder twice to make it look like he attacked her. Skye hears the commotion and rushes to her mother. "This is war," she says, before collapsing.

Back on Agent Morse's quinjet, Ward congratulates Agent 33 on a job well done as the two get closer to finding "closure."

Retrieved from "https://marvel.fandom.com/wiki/Marvel%27s_Agents_of_S.H.I.E.L.D._Season_2_20?oldid=5696033"
Community content is available under CC-BY-SA unless otherwise noted.