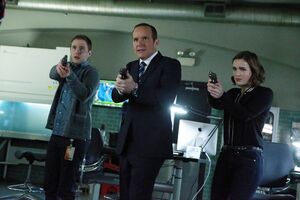 I am not a monster. I am an angel. I'm finally what I meant to be. Angels are guardians, Jiaying, but they're also heralds, sent to reveal the truth. And that is my purpose. I'm here to show the Inhumans exactly what you are. Even in the darkness, they will see the truth.

Tensions between S.H.I.E.L.D. and the Inhumans quickly escalate. Simmons offers to take a look at Jiaying's wounds, but she thinks S.H.I.E.L.D. has done already enough and goes to see one of her own healers. Simmons, May and Weaver report back to the Playground on what happened between Gonzales and Jiaying and to inquire about the location of Bobbi's quinjet. Meanwhile, Gordon teleports himself and another Inhuman onto another quinjet and attack the two agents inside. Gordon teleports away with one of the agents while the other hijacks the plane and fires its missiles at Afterlife. Believing they are under attack from S.H.I.E.L.D., the Inhumans retaliate, and the S.H.I.E.L.D. agents are not afraid to defend themselves. Skye attacks one agent who shot an Inhuman and then aimed his gun at her. Agent May tells her to stand down, but Skye refuses. The two of them fight, and Skye uses her powers to knock May out. She wakes up on the quinjet with Simmons and their prisoner Cal as it makes its way back to the Playground. Coulson orders Agent Weaver to command the Iliad to defend it and the Kree weapon in its cargo hold from the Inhumans. Meanwhile, Agent Oliver tries to convince Mack to stay with S.H.I.E.L.D. as the aircraft carrier comes under attack, destroying the device they use to track Gordon.

With the battle at Afterlife over, Skye speaks with Raina, seeking the truth behind what happened between her mother and Gonzales. Raina, as usual, speaks in cryptic riddles, only frustrating Skye to the point that she walks out on her. Gordon brings the S.H.I.E.L.D. agent he captured to Jiaying, who seemingly sucks the life out of him through her hands to heal her wounds. The quinjet with Simmons, May, and Cal arrives at the Playground. Coulson has Cal put in the facility's holding cell. Simmons warns the Director that Cal took three samples of a mysterious substance, which she later discovers to be a makeshift attempt at super strength. Hunter and Fitz have since discovered that Bobbi left the Playground with Agent May, who they deduce must have been Agent 33 in disguise. Coulson orders Hunter and May to go to Bobbi's quinjet's last known location in Spain to investigate. Meanwhile, Ward and Agent 33 hold Bobbi prisoner and confront her with information Bakshi gave to them - that she personally handed Agent 33 over to Hydra. They want Bobbi to confess to what she did to Agent 33 to she can have closure, and torture her with a mixture of a paralytic and anesthetic that will slowly wear off.

Back at Afterlife, Raina and Jiaying meet alone in private. Raina reveals she has become content with her transformation, and threatens to reveal Jiaying's true, devious self to the Inhumans. Jiaying kills Raina with the gift Gonzales gave her to protect her secret. However, Skye saw the whole thing and confronts her mother and what she had done. Skye now realizes that her mother was behind what happened with Gonzales, and that she was drawing her people into a pointless war with S.H.I.E.L.D. While the two of them argue over Jiaying's actions, another Inhuman sneaks up behind Skye and knocks her out with a blow to the head. She is then bound and taken to a prison on board the Iliad. All this time, Gordon has been slowly teleporting Inhumans onto the aircraft carrier, stealthily taking out the S.H.I.E.L.D. agents on board each time. Eventually there are enough Inhumans on board to take the rest of the ship by storm. Lincoln uses his powers to fry the ship's power grid, alerting the rest of the agents on board to their presence. Inhumans storm into the bridge and hold Agent Weaver and the other commanding agents hostage. Mack, however, was in the lower levels of the ship working on restoring the device that could track Gordon. He sees the Inhumans have Skye with them and goes to rescue her.

In Spain, the anesthetic Ward gave Bobbi begins to wear off. Rather than give in to their demands, Bobbi confronts Ward about his own traitorous past. She rips the nails out Ward put under her fingernails, stabs Ward with them, and they start to fight. Although they are evenly matched, Ward gains an advantage when Agent 33 walks in on them. The two of them together manage to take her down and Ward breaks her leg. While she's down on the ground, they ask Bobbi for her final words. She only says that given the chance she would do it all over again. Ward gives Agent 33 a gun to kill Bobbi, but she says it doesn't feel right and refuses to kill her. Instead, Ward ties her up and places a gun turret next to her that will automatically fire when someone walks through the door. Ward and Agent 33 leave content with the idea that anyone who tries to save her will have their brains blown out.

At the Playground, Coulson tries to talk with Cal about his family and the concoction he took. Cal is clearly showing symptoms of something. Coulson realizes that all the terrible things Cal has done over the past twenty years were done not only with that formula in his system but also at the behest of his wife. Cal, enraged, attempts to lash out at Coulson, but instead goes into cardiac arrest. He's taken to the Playground's medical center, where FitzSimmons attempt to revive him. After Simmons injects him with a syringe, Cal starts to convulse and fall of the bed. He arises having transformed into the monster the formula turns him into. Coulson orders all of his men to leave the medical facility, leaving himself and FitzSimmons to deal with the monstrous doctor. They lead him on a chase through the Playground, ending in the hangar bay. Coulson drives a car into Cal and pins him to the hangar wall. Rather than keep fighting him, Coulson again tries to connect with Cal over their feelings for Skye. He tries to tell Cal that he really is a good man whose love for his family has driven him down a dark path. Cal breaks down, revealing to Coulson that he reassembled his wife piece by piece after what Whitehall did to her. Before, she would be devastated when an elder would sacrifice himself so she could live on and pass down their traditions to another generation; however, she has since began to take countless lives to ensure her own survival with no remorse for those she killed. Coulson makes Cal see that Jiaying's actions have done nothing but put their daughter in grave danger. Cal pushes the car away from him, and asks Coulson to let him help them save Skye.

Retrieved from "https://marvel.fandom.com/wiki/Marvel%27s_Agents_of_S.H.I.E.L.D._Season_2_21?oldid=5696034"
Community content is available under CC-BY-SA unless otherwise noted.