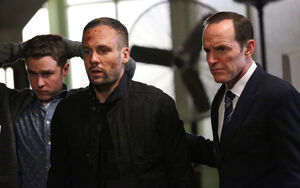 This war started decades ago when S.H.I.E.L.D. was founded to guard the world against people like us. And it will never end. But you and I together...think of how powerful we could be. We could launch a revolution, side by side.

The Inhumans have taken the Iliad by force. A distress beacon has been sent out from the ship to the Playground. Jiaying tries to force Agents Weaver and Oliver to expand the beacon, alerting all of S.H.I.E.L.D. to what is happening on the ship. She wants to send a message to S.H.I.E.L.D., warning them what would happen should they ever interfere with the Inhumans ever again. When Agent Oliver refuses, she has him thrown into a room with one of her synthetic Terrigen Crystals, turning him to dust. With the threat Jiaying might do that to more agents, Weaver expands the signal's beacon. Lincoln, however, is equally terrified, and begins to doubt Jiaying's judgment. Meanwhile, Mack breaks Skye out of her holding cell. She says she won't be of any use to him since the Inhumans placed an inhibitor on her, but Mack instead wants her for her hacking skills. Meanwhile, May, Hunter, and their team have closed in on Bobbi and Ward's location. Ward and Agent 33 watch as they search the building for her, taking out S.H.I.E.L.D. agents as they can. Ward eventually catches Agent May off-guard and empties his magazine into her stomach point blank; however, May calls him "baby," with her dying breath, and her face changes into that of Agent 33. Bobbi tries to warn her rescuers about Ward's trap, but it's no use. Just as Hunter opens the door, Bobbi rocks her chair violently enough so the bullet passes through her neck rather than hit Hunter.

Coulson prepares his team to respond to the S.O.S. from the Iliad. Simmons tries to patch up Cal's wounds, but the lab is barely usable after his rampage. The team from Spain come back with Bobbi in critical condition. Hunter and Simmons opt to stay behind with her while the rest of the team and Cal go to the aircraft carrier. Before they leave, Fitz tells Coulson he's found a way to disrupt Gordon's teleportation, keeping him trapped in one place. May calls Andrew, seeking some emotional support from him. Simmons, compelled by what she saw between Hunter and Bobbi, tries to open up to Fitz about her feelings for him, but Fitz says they'll talk about it when he gets back. Before she can say anything else, Coulson tells Fitz it's time to go. Back on the ship, Skye manages to interrupt the beacon but Lincoln catches her. He shoots her with a bolt of lightning. Skye gets to her feet and tries to open up Lincoln's eyes to what her mother is doing. Just as she seems to get through to him, Mack knocks him out with a surprise attack from behind. Coulson's quinjet receives the new message from the aircraft carrier. He orders all the quinjets except his turn back. Jiaying realizes what has happened, and orders Gordon to release the Terrigen Mists through the ship's vents as planned.

Coulson's quinjet lands on the aircraft carrier and they immediately plan their attack. Coulson wants Cal to stay behind as a last ditch measure, but Cal instead volunteers to go ahead of them to personally handle this "family matter." Gordon teleports into the room to disperse the Terrigen Mists, but finds Mack there waiting for him, guarding the chest of Terrigen Crystals. Mack attacks Gordon with an axe to keep him from the Crystals, but Gordon eventually just teleports out of the room. On the bridge, Jiaying tries to leave with the other crate of Terrigen Crystals. Skye confronts her in the bridge, but Jiaying has Alisha, an Inhuman with the ability to duplicate herself, attack her. Jiaying uses this distraction to leave, but is Cal blocks her exit. Jiaying realizes he is with S.H.I.E.L.D. when he tries to talk her into standing down. Rather than fight him, Jiaying has Gordon teleport him into a locked room he cannot escape from. Agent May fights her way through the Inhumans on the ship until she reaches Lincoln. Skye meanwhile still fights Alisha, who keeps duplicating herself when one clone goes down, all without the use of her powers. Eventually, the duplicates overwhelm her, and start beating her into the ground. May and Lincoln, now working together, take out the duplicates. Lincoln sends a shock through Skye's inhibitors so she can use her powers to stop Jiaying. The two of them then proceed to fight the remaining duplicates, and Lincoln electrifies a railing to take out the original Alisha, causing her duplicates to fall down.

Meanwhile, Coulson and Fitz have met up with Mack in the control room. Mack tells them the ricochet in the room is too risky to use a gun, and the two of them pick up pieces of machinery in the room to attack Gordon with. When the teleporter arrives comes back, Fitz activates his device to keep Gordon trapped in the room. Much to Coulson's and Mack's frustration, Gordon is still able to teleport within the room. He teleports himself over to the crate to pick up one of the Crystals to use against the three of them, but unknowingly teleports himself into the pipe Fitz holds. The pipe goes through his heart, killing him. However, he did manage to grab a crystal, and it falls to the floor. Coulson dodges to grab it before it hits the ground. Coulson's arm starts to turn to stone, so Mack cuts off the ruined part of his arm to prevent the infection from spreading. Skye catches up to her mother on the aircraft carrier's landing strip. Jiaying has two Inhumans get on the quinjet with the Crystals as she speaks with her daughter. Once Jiaying realizes Skye is lost to S.H.I.E.L.D., she grabs her face to drain the life from her. Skye uses her powers to first separate herself from her mother, and then to push the quinjet carrying the Crystals into the ocean. Jiaying again uses her powers to try and kill Skye. This time, Skye sends shockwaves through her mother to kill her instead. Cal, having somehow escaped from the locked room, breaks their stalemate by breaking his wife's neck so Skye wouldn't have to live with the pain of killing her own mother. Cal then lifts Jiaying into the air and finishes the deed by snapping her spine. He gently lowers the body and caresses his wife's corpse.

Some time later, the now-maimed Phil Coulson has become a patient of Dr. Garner's. He lays out blueprints for unknown devices he plans to have Fitz build on the floor. He then discusses with Garner whether Skye is ready for the initiative he has planned for her, though he plans on easing everyone into this slowly. Coulson convinced Mack not to leave and put him in charge of any alien artifacts they come across. He and FitzSimmons continue to study the Kree weapon, but Mack's official policy is that the box it's in will never be opened. May has decided to take some time off and reconnect with her ex-husband. Bobbi, still badly wounded from her encounter with Ward, tells Hunter she can no longer handle life as a S.H.I.E.L.D. agent. Skye says goodbye to her father, who realizes this is probably the last time they'll see each other. Skye promises she will visit him often. Cal is subjected to the T.A.H.I.T.I. protocols, and opens up a veterinary clinic as Dr. Winslow. He no longer recognizes Skye when she goes to see him in his new life. She then rejoins Coulson, who passes her a file titled "Caterpillars", hinting that she will be leading a super-powered team. Skye tells Coulson that she had been thinking about some of Jiaying's beliefs and agrees that Inhumans like herself have to be kept a secret unlike the Avengers. Coulson agrees with her and remarks that things are going to get worse before they get better.

Meanwhile, Grant Ward drinks his pain away in a bar after losing Agent 33. A group of thugs approach him. The leader of the group, Kebo, hands Ward a list of names, but he is dissatisfied with how short the list is. The thug tells him Hydra's entire leadership structure has unraveled. Ward viciously beats Kebo and takes the other Hydra thugs under his command.

Jiaying's artificial Terrigen Crystals dissolve at the bottom of the sea. The Crystals infect the nearby schools of fish, which are caught and turned into products sold on store shelves, implying that any Inhuman unaware of their origins who ingests these will undergo Terrigenesis. Meanwhile, Fitz finally works up the courage (and finds the words) to ask Simmons out to dinner. Simmons stays behind in the lab a little longer to finish her analysis of the Kree weapon. She notices the container door slightly ajar. As she reaches to close it, the item turns into a liquid and burst through the door. It covers Simmons and seemingly swallows her before taking its solid form.

Retrieved from "https://marvel.fandom.com/wiki/Marvel%27s_Agents_of_S.H.I.E.L.D._Season_2_22?oldid=5505961"
Community content is available under CC-BY-SA unless otherwise noted.