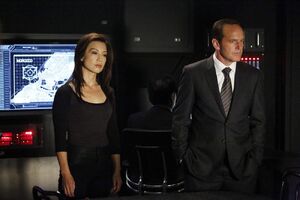 While a S.H.I.E.L.D. agent is considering right and wrong, Hydra's already taken the shot.

Dr. Whitehall and his underling Bakshi are in Whitehall's office trying to force a former S.H.I.E.L.D. agent to join Hydra. She at first refuses, so Whitehall starts subjecting her to a method of psychological torture known as the "Faustus method."

At the Playground, Skye is practicing at the firing range with May. Mack and Lance Hunter come in and ask if Skye went to S.H.I.E.L.D. academy to settle a bet. Coulson arrives back at the headquarters, frustrated that Hydra, in their "talent grab," managed to get to Agent 33 before he could. He then goes to check up on Simmons, who has been working undercover at Hydra as a scientist. Hydra has her studying cells that can produce liquid nitrogen which she recognizes as Donnie Gill's, who since his accident at the academy has gained the ability to freeze any object on touch. She reports her findings to Coulson, while he recommends she try and make friends with other Hydra scientists. The next day, she tries to be friendlier to her boss, but is instead escorted by armed guards to speak with Bakshi. He confronts a confused Simmons for "lying" to Hydra by not disclosing her past relationship with Donnie Gill, but Simmons assures Bakshi that she did not know whose cells she was studying. She also swears to him her loyalty to Hydra, and he tells Simmons she'll have the chance to prove her loyalty soon.

Meanwhile, in Morocco, Donnie Gill is hiding from the Hydra agents at a hotel in Marrakech. Two such agents find him, but Donnie Gill easily kills them and the owner of the hotel with his freezing abilities. He finds one of the agents' phones, and sees that they were to take him to Maribel del Mar, a boat in the port of Casablanca. Donnie makes his way to the boat, freezes it in the harbor, and kills its crew. However, an iceberg in the Middle East does not go unnoticed, and reveals his location to both S.H.I.E.L.D. and Hydra. Coulson takes his entire team except for Fitz and Mack to Morocco, while Bakshi takes a team of Hydra agents along with Simmons to recruit him. Bakshi has Simmons go on the boat alone, believing he could use Donnie's familiarity with her to keep him calm.

Fitz investigates the "asset" in Vault D that is being kept secret from him, discovering it to be none other than Ward. The sight of the person who almost killed him causes Fitz to start breaking down, so he cuts off the oxygen to Ward's cell so he could damage him the same way his brush with death damaged his mind. When Fitz tells him that everyone else is gone after Donnie Gill, Ward warns him that they don't know what they're running into. Meanwhile, Skye, May and Hunter have infiltrated the Maribel del Mar, but find Simmons has already gotten to him. Coulson has since gotten the warning from Fitz and Ward, that Donnie was previously brainwashed into Hydra's service and was there to try and reactive him, so he orders them to separate Simmons from him immediately. Through an earpiece, Bakshi instructs her to recite a specific phrase to Gill, but is interrupted by shots from Hunter and May. Donnie, realizing what's going on, attacks Simmons, but she is able to get away from him. She runs back to her Hydra detail, leading Donnie right to them. Bakshi steps in front of him, and recites the activation phrase from the Faustus method to bring him back to their side. With Gill at their side, Hydra starts to make their escape from the ship, but Bakshi first orders Donnie to ice the entire boat, killing everyone inside. Before he can do this, however, Skye takes him out with a sniper rifle, her first kill. Donnie falls over the side of the boat, and as he sinks to the bottom, his body is covered in ice.

Although Donnie was lost, the mission was not a total failure as S.H.I.E.L.D. was able to recover several crates of Hydra technology. They take it back to the Playground, where Coulson is already chewing out Fitz for what he did to Ward, but explains to him why he hasn't heard from Simmons in so long.

Back at Hydra, Whitehall remarks that S.H.I.E.L.D. is becoming a problem, but Bakshi states that they don't know who the new director is. They are then interrupted by a successfully brainwashed Agent 33, who brings Whitehall a file. After being dismissed, Bakshi remarked that Donnie's program proved to be unstable. He then changes the subject, telling Whitehall that he feels that Simmons should be promoted. However, if he feels that Simmons is unreliable, then they'll use their "Faustus method" on her.

Meanwhile, Skye is talking to Ward on Hydra's brainwashing techniques. He admits that it's used for special cases but not used often, as it can be unreliable. He also assures her that he himself is not brainwashed, stating that everything he has done was his own decision. He then tells her that her father's alive and looking for her and that, when she's ready, he will take her to him. Skye leaves him to reel from the shock. She checks her watch, noting that her heartbeat is climbing.

Retrieved from "https://marvel.fandom.com/wiki/Marvel%27s_Agents_of_S.H.I.E.L.D._Season_2_3?oldid=5506308"
Community content is available under CC-BY-SA unless otherwise noted.