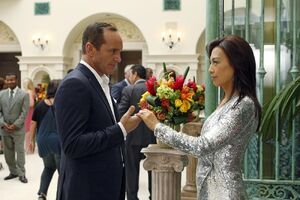 She just said more words than I've heard her say in a year.

Appearing in "Face My Enemy"

Synopsis for "Face My Enemy"

A Catholic bishop arrives at a church in Miami, Florida that was recently devastated in a fire. After talking to one of the church's priests, the bishop finds only one piece of art, a Madonna, wasn't destroyed in the blaze. The bishop wants to take the painting with him to help rebuild the church, but the priest is reluctant to hand it over. The bishop asks him what he is hiding, so the priest turns the painting around to reveal Coulson's runes on its back.

Posing as a husband and wife, Coulson and May attend a fundraiser for the church held by Gabriel Soto at his South Beach mansion. S.H.I.E.L.D. hopes the "miracle painting" may hold clues to the origin of the runes. Much to their surprise, Brigadier General Talbot is also in attendance at the party. Coulson approaches the (slightly inebriated) Talbot when they have a moment alone and begs him not to blow their cover. Talbot agrees not to blow their cover, even if it is as only as long as he pleases, as long as Coulson doesn't attract any attention. Coulson heads back to May and they try and enjoy the party. Later on, May starts talking with their host, and asks Coulson to take their picture together so they could use his retinas to get past his security. While taking the picture, Coulson sees Talbot pointing out him and May to one of Soto's security guards. Realizing their cover is blown, Coulson and May speed up their mission and go after the painting. Since they have no more reason to be subtle about it, the two of them ignore most of the defenses put around the painting, only to find that it is no longer there. Skye, who is on the Bus (which is still grounded in the Playground) with the rest of the team, discovers the painting had been bought by the American government, explaining Talbot's appearance.

Coulson and May leave the mansion empty-handed, but are confronted by Talbot on their way out. He offers Coulson the opportunity to study the painting at a government facility, albeit under Talbot's supervision the entire time. Coulson agrees, but asks for an hour to give orders to his agents. May instead goes to the hotel Talbot told them to meet him at to make sure Talbot wasn't trying to trap them while Coulson heads back to the Playground. Once May is outside Talbot's room, she peeks inside and sees a folder with a Hydra logo on it. May barges into the room and attacks the female Hydra agent inside, the same agent Dr. Whitehall brainwashed into joining Hydra earlier. May is able to overpower her, but Talbot sneaks up from behind. While fighting the general, a thin sheet falls off Talbot's face, revealed to be a mask for the Hydra agent Sunil Bakshi. While May is stunned at the find, the other agent takes her out from behind with a taser. She then places the mask on her face and takes on the identity of Agent May.

The false Agent May uses May's phone to call Coulson, allowing Bakshi to pinpoint his location. She heads to the Bus, where no one notices anything too strange about her. On her way to see the director, the false Agent May puts a device on a terminal in the Bus, which slowly starts to take over the plane's computers. She reports to Coulson that Talbot's offer seems legitimate, and the two head back to his hotel room. On the way, Coulson starts to notice strange behavior out of her, and he asks her if she is up to get a cup of coffee after the mission, an offer May would routinely decline. Once she agrees to it, Coulson knows this is not the real May and attacks her. Up in the hotel room, Bakshi tortures the real Agent May to get information about S.H.I.E.L.D. out of him, but she escapes when Bakshi is distracted by the commotion outside his room. May eventually barges in on Coulson's fight and takes over for him. While May is fighting her impostor, Coulson tries to take the painting from Bakshi. Just before Coulson takes him out with his I.C.E.R, Bakshi calls in an extraction team. May meanwhile takes out her equally-matched opponent using one of Bakshi's torture devices.

Back at the Playground, the computer virus from device the impostor planted in the bus has taken full control of the plane's computers. First, the power shuts off, then the cargo bay door and all other openings to the outside are sealed, trapping the entire team inside. Mack recognizes this as the plane's way of dealing with a water landing, and Fitz realizes the plane will soon start a self-destruct sequence. System after system starts to shut down, each one spreading the virus to another. The members of the team spread out through the Bus trying to repair the ship, while Fitz and Hunter head to the core of the Bus's systems to stop the virus. Fitz, due to his brain damage, is unable to physically do this, however, and instructs Hunter on how to restore the plane's systems moments before the it would explode.

Some time later, Hunter shows up with beers for himself, Fitz and Mack. Fitz, who has been struggling with socializing with his teammates, reluctantly accepts the beer, and, although he does not have a story about an ex like everyone else, shares one about a girl who rejected him once. In Coulson's office, Coulson and May abruptly cut off a call with Talbot about the painting. The analysis of the artwork comes back, revealing that although the painting itself is over 500 years old, the runes on the back are relatively new. This leads Coulson to believe that someone else out there is making these carvings just like him. He then brings up to May that if he ever goes mad like Garrett did, she needs to be the one to put him down. May refuses to accept this, assuring him that if he ever did go crazy she will get him out and put him in a cabin in the Australian Outback, but Coulson orders her to kill him anyway should the time come.

Elsewhere, Raina is on the phone talking to someone about going to Miami after the painting. Once she gets in her car, Hydra agents ambush her, trapping her inside. Dr. Whitehall gets into the back seat, places a device on her hand, and tells her she has 48 hours to bring him the Obelisk.

Like this? Let us know!
Retrieved from "https://marvel.fandom.com/wiki/Marvel%27s_Agents_of_S.H.I.E.L.D._Season_2_4?oldid=6498149"
Community content is available under CC-BY-SA unless otherwise noted.