"A Hen in the Wolf House" 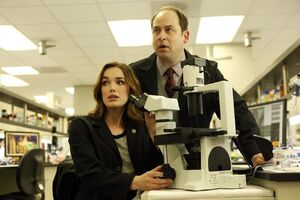 Episode Title
"A Hen in the Wolf House"

We share a common enemy: a guy named Phil Coulson. I thought maybe together you and I could kill him, along with, you know, everyone else.

Appearing in "A Hen in the Wolf House"

Synopsis for "A Hen in the Wolf House"

Hydra tests a weapon based on their work with the Obelisk at a wedding where the attendants are Navy officers part of a Hydra task force. However, the test was deemed a failure, as only a few are killed. News of this reaches S.H.I.E.L.D., who assume that Hydra possess the Obelisk. As May, Skye, Triplett and Hunter visit Coulson in his office, Skye notices the same mysterious alien writing etched into his desk. When she asks for his source on the writing, he remains tight-lipped about it. As everyone else leaves, May advises Coulson that keeping Skye in the dark will not end well.

Meanwhile, Raina still needs to deliver the Obelisk to Hydra or Daniel Whitehall will kill her. She returns to Skye's father, who is in the middle of operating on some criminals. Angry that Raina would interrupt this procedure, he lashes out at her but notes that she seems afraid. When she admits that and places his hand around her throat. Although he won't hand over the Obelisk, he does remind her that he still needs for her to reunite him with his daughter.

At Daniel Whitehall's HQ, Jemma Simmons is studying a sample from Bessie the Hellcow with Kenneth Turgeon when Sunil Bakshi summons the both of them to a meeting of high-ranking Hydra scientists, headed by Whitehall himself. When Whitehall reveals that they had tried to weaponize the effects from an Obelisk victim (the waitress who came into contact with Carl Creel), he addresses Simmons for her opinion. When she answers that alien technology can be unpredictable, it only makes Whitehall more determined to claim the Obelisk. As the meeting ends, Simmons confides in Turgeon that Hydra is planned on mass murder by weaponizing the Obelisk, but he is unconcerned. Simmons then leaves the building to pass a message to S.H.I.E.L.D. at her dead drop on a flex screen that disguises itself as a discarded menu, warning them that Hydra is planning an extinction-level event, unaware that she had been spotted by Raina.

Back at the Playground, Skye is examining the religious painting with the alien writing scribbled on the back in her room on the Bus, when Hunter comes up to chat with her. As she remarks that Coulson wasn't always closed off, Hunter suggests finding out what he's hiding. This leads her to visit Ward in his cell. Immediately, he gets on the topic of her father, insisting that he's alive, though Skye believes that her parents died in the Hunan province in China along with an entire village. As Ward insists that he would never lie to her, she challenges him to name her source. When he admits it was Raina, she laughs this off, believing that Raina had tricked him.

Changing the subject, she demanded to know about the alien writing. Ward identifies it as the same one as what he saw on their Belarus mission and mentions that Garrett started drawing that after being injected with GH.325, carving it non-stop, driving him mad. Skye then goes to confront Coulson, who admits that he began carving the symbols after the first night he saw Garrett's writing. When Skye points out that she hasn't experienced the same thing, Coulson theorizes that he and Garrett experienced a negative reaction to GH.325 and she didn't because she might be an alien. As this theory rattles Skye, May interrupts them, announcing that Raina has called and wants to meet.

Hydra meanwhile has been tipped off to the presence of a S.H.I.E.L.D. mole, and they have the flex screen Simmons used to send her messages as evidence. Bobbi Morse, Hydra's chief of security, leads the investigation, and while she is questioning Simmons another Hydra agent finds one of the sheets at Turgeon's workstation. Once Turgeon is knocked out and taken away, Simmons goes to the bathroom to calm down, but Morse followed her in there and resumes questioning her. Simmons permits Morse to look at her hard drive, stating that there's nothing but Hydra intel on it.

Meanwhile, Coulson has met Raina at a nearby restaurant, while Hunter, Skye, and May are positioned throughout the location in case it went bad. Raina shows Coulson the picture he took of Simmons, and threatens to send it to every Hydra agent's email unless he hands Skye over to her. This offer gets to Skye, fearing for Simmons' life, forcing May to restrain her. Despite the threat, Coulson refuses to hand her over to Raina, and the picture is sent to Hydra.

With her cover blown, Simmons tries to escape from the Hydra facility, but finds herself being approached by Bakshi on one side and Morse on the other. However, Morse takes out two batons and attacks the Hydra agents accompanying her, and reveals herself to be another undercover agent working for Coulson. The two of them head for the roof, where a cloaked quinjet piloted by Triplett is waiting to pick them up. Morse then pulls out Simmons' hard drive, full of Hydra intel to help S.H.I.E.L.D.

At the restaurant, Raina questions why Coulson would risk one of his own agents. As Hunter joins him, he states that he doesn't take risks in this business. With her leverage gone, Raina admits that Hydra was threatening her. Coulson then deduces that Skye's father possesses the Obelisk. She then pleads to be taken into his custody to flee Whitehall's wrath, but is refused. Hunter then injects a tracker into her leg, as she would be used as bait to lure out Whitehall. Coulson then demands and demands Skye's father's location. When she gives it up, they send Raina off. Noting that Skye's father is just a few blocks away, May and Coulson turn off their earpieces, the former reminding him what Richard Lumley had told them; Skye's father is what scared him most. Skye leaves for his location alone. He is already gone by the time she arrives, but Skye finds a framed picture of him on the ground. Coulson and the others show up soon after, and find the bodies of the criminals he was working on earlier brutally murdered. Skye calls him a monster, causing her father, who was waiting outside, to smash the tablet he was watching them on in despair and drives away.

Both teams regroup back at the Playground, where Morse almost immediately gets into an argument with Hunter, her ex-husband. Simmons goes to see Fitz, while Coulson takes Skye up to his office to show her the runes. He confides in her that it frustrates him that he has no idea what the carvings mean, but Skye thinks it is a map. Back at Hydra's offices, as the terrorists are preparing to move house, Skye's father barges into Dr. Whitehall's office, effortlessly killing the Hydra agents he sends to stop him. He then gives the Obelisk, the "Diviner" in its mother language, and offers to teach Whitehall how to unlock its secrets. Together, the two of them will take on their common foe - Phil Coulson.

This episode marks the debut of Bobbi Morse, aka Mockingbird, portrayed by Adrianne Palicki.[2]

Retrieved from "https://marvel.fandom.com/wiki/Marvel%27s_Agents_of_S.H.I.E.L.D._Season_2_5?oldid=5505931"
Community content is available under CC-BY-SA unless otherwise noted.