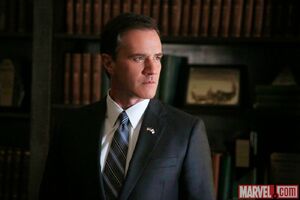 I've spent too much of my life trying to unravel his lies...And yet, he keeps telling them. He always finds someone to believe them.

Appearing in "A Fractured House"

Synopsis for "A Fractured House"

A team of Hydra operatives disguised as S.H.I.E.L.D. agents attacks the United Nations while Brigadier General Glenn Talbot is delivering a speech about the danger S.H.I.E.L.D. poses to the world. In the wake of the attack, the rest of the world starts to turn against S.H.I.E.L.D., and Senator Christian Ward, the older brother of Grant Ward, takes over the mission to take them down. At the Playground, Coulson checks in on his agents in the Netherlands and prepares to deal with this new situation. Simmons recognizes the particular kind of splinter bomb the Hydra agents used in the attack as something created by Okinawa-based Toshiro Mori, so Coulson sends Hunter and agents May and Morse to Japan. Hunter is at first reluctant to go on a mission with his ex-wife, but eventually relents. Morse and Hunter try to be nice towards each other on the way to Okinawa, each trying to break the tension between them by complimenting their looks. Once they get there, the plan is for Agent Morse, who knows Mori from her days working undercover at Hydra, to deceive him into giving up Hydra's plans while May and Hunter wait on the plane. She does this by flirting with him, and Mori reveals Hydra's next target is Julien Beckers, a Belgian foreign minister who spoke against Senator Ward's crusade against S.H.I.E.L.D.; he also mentions that Skye's father had given Hydra the Obelisk. While this information is being revealed, Hunter notices a Hydra agent coming up being Morse and intervenes to stop him. Morse then takes out Mori, and reminds her ex-husband he didn't need to save her. The three of them then take off for Belgium to save Beckers from Hydra.

Coulson goes to Washington to speak directly to Senator Ward in his office. Couslon reminds him that they have a common enemy in Hydra, and warns him that he will reveal his younger brother was a Hydra agent to the public if he does not call off the hunt for S.H.I.E.L.D. agents. If he does, however, Coulson promises to hand over Ward into his custody. Senator Ward shows a genuine interest in his brother's treatment. This surprises Coulson, who as heard all of Ward's stories about how his older brother abused him and forced him into abusing his younger brother Thomas. Senator Ward reveals that he never abused Grant and that all of those stories were lies he concocted to shield himself from any responsibility. The story about the well in particular is a lie, as Senator Ward merely found his brothers near a river with Grant wielding a screwdriver standing over Thomas. Meanwhile, Skye starts talking to Ward, trying to get all of the information out of him about her father as he can. He reveals that all the horrible things her father has done has been to protect her and out of love. The village he wiped out in the Hunan Province wasn't a village at all - it was a squad of Hydra agents there to retrieve Skye, but her mother died in the process. He offers to help her find him, claiming to have resources but he refuses to give them up unless she frees him. However, now that Ward had revealed all he knew about her father, Skye informs him that she no longer needs him, and that he will soon be transferred into his brother's custody.

Before the transfer, Coulson visits Grant, who insists that his brother can't be trusted. Coulson reminds him that he sat outside his cell for three and half weeks and he refused to talk, thus he's too late for forgiveness. Grant tries to reason that he hadn't given Skye one bad piece of intel and insists that he's still part of the team. Coulson takes that in contempt, holding Grant accountable for throwing FitzSimmons out of the Bus and the murders of Victoria Hand and Eric Koenig. He tells him that the only reason he's alive is because he was of use and now he's being handed over to Christian because the senator is of better use. Grant remarks that his brother will capitalize on having him publicly tried and executed before the midterms. Coulson states that Christian said the same thing; perhaps the two brothers are more alike than they think.

Meanwhile, Fitz, Simmons and Mack are trying to figure out why Hydra would target Beckers. They discover the splinter bombs the Hydra agent used were first conceived by Vincent Beckers, a Hydra scientist who worked with the Red Skull in the 1940's and Julien Beckers' grandfather. Realizing that Hunter, May and Morse are heading into a trap, Coulson tries to send word to the S.H.I.E.L.D. safe house in Bruges, but Hydra has already taken out the team of S.H.I.E.L.D. agents stationed there. Hunter barges into the safe house not long after carrying a case of beer and starts acting friendly towards the Hydra agents inside. This distraction gives Morse and May enough time to get into place, and the two of them crash through a window and start fighting Hydra. May goes after Marcus Scarlotti, the leader of the squad of Hydra agents, while Morse and Hunter take care of the rest. During the fight, Hunter saves Morse's life yet again, only this time she thanks him for it. Meanwhile, Scarlotti fights May using a whip-like weapon with a knife attached to its end. He uses this weapon to almost strangle May, but she gets out of it and is able to defeat him. Talbot and the military arrive soon after to take the surviving Hydra agents into custody, and reveals that Beckers was arrested trying to cross the border. Talbot asks may how many men she lost. May answers with "six," and Talbot tells her its always a shame to lose a good soldier and holds out his hand for her to shake.

Back at the Playground, Coulson arrive with a heavily armed squad to bring Grant Ward to the exchange site with the FBI. While being taken away, his former teammates watch in disgust and silence. Ward attempts to reach out to Skye one final time when he passes her on the way out, but she ignores him and is interrupted by Simmons, who coldly threatens to kill him if she ever sees him again. At the exchange site, Coulson warn to the FBI not to give him an inch. Meanwhile, Senator Ward holds a press conference to reveal his brother's affiliation with Hydra and that SHIELD is an organization based on protection where HYDRA is based on world domination. Ward meanwhile is able to slide the cuffs off his wrists, flexing the thumb he was training at the start of the episode. He knock-off a guard and the scene end with him pointing the gun taken from the first guard against the second.

Elsewhere, a man walks into a tattoo parlor to finish a series of tattoos he's been getting. The man takes off his shirt, revealing he has tattooed the alien glyphs all over his body.

Retrieved from "https://marvel.fandom.com/wiki/Marvel%27s_Agents_of_S.H.I.E.L.D._Season_2_6?oldid=5505932"
Community content is available under CC-BY-SA unless otherwise noted.