"The Writing on the Wall" 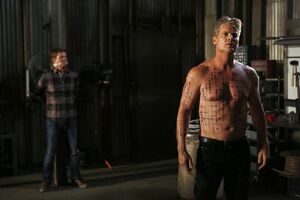 Episode Title
"The Writing on the Wall"

No, trying to bring dead agents back to life using alien blood blows everything else away.

Appearing in "The Writing on the Wall"

Synopsis for "The Writing on the Wall"

A woman takes a man (the same man who covered his body in tattoos of the carvings Coulson had been making) back to her apartment. They make small talk over whether they already know each other. The man then takes off his shirt, revealing his tattoos, and kills the woman.

At the Playground, Coulson is busy making his carvings when Skye interrupts him. May, Morse, Hunter, and Triplett are on mission tracking down Grant Ward since he escaped his brother's custody. Skye lets Coulson know that one of her contacts shared with her a murder where the victim (the woman from before) had Coulson's carvings carved into her corpse. Coulson recognizes the woman, identified as Janice Robbins, as a S.H.I.E.L.D. agent, but Skye finds that her record says she died five years ago. Coulson and Skye go to New York to investigate the scene, and find that she had made numerous paintings of the carvings before she died. Taking the paintings back to the Playground for assembly, Coulson notes that some pieces are missing. Skye compares Robbins' mugshot to known S.H.I.E.L.D. agents, revealing her true identity as Agent Rebecca Stevens, who apparently died of cancer five years ago. Mack and Fitz confiscate her body for Simmons' autopsy. Simmons discovers she had the GH.325 serum in her blood, meaning she was a test subject in the T.A.H.I.T.I. project. Realizing that the killer must be another T.A.H.I.T.I. test subject, Coulson puts himself in the memory machine to see if he can uncover his identity. The machine takes Coulson back to his days running the T.A.H.I.T.I. project, and forces him to re-witness the deterioration of the test subjects' mental states as they start making the carvings. Coulson argues with Doctor Goodman over canceling the project and destroying the Guest-Host. Goodman theorized that the Host's genetic memory was imprinting on the test subjects, creating a psychic schism, and solved the problem by implanting the test subjects with false memories and give them a new life. As Coulson is reliving these memories, he starts convulsing and shouting how he needs to know about the carvings, forcing the others to take him out of the machine. They've narrowed the identity of the killer down to two former S.H.I.E.L.D. agents - Hank Thompson and Sebastian Derik. Skye privately tells the Director that he needs to stay behind, as his condition is worsening, but Coulson throws her into Ward's cell and leaves on his own.

After tracking Ward across the country, Hunter follows him to Boston, where he meets up with Bakshi at a bar. Inside, Ward notes that since Strucker is overseas, the North American Hydra answers to Whitehall and requests a meeting, offering to get Bakshi close enough to Coulson to "put a bullet in him point blank." Hunter lets the other agents on the hunt for him know about the meeting. They regroup in Boston, but once they go into the bar they find Ward killed the bartender and tied up Bakshi. The agents take him into their custody and bring him back to the Playground. Meanwhile, Coulson arrives at the house of Hank Thompson, and demands at gunpoint he reveal anything he knows about the carvings. Thompson tells him he couldn't help either of them as the killer, Sebastian Derik, sneaks up behind him and knocks him out. Derik then ties up Thompson, his family, and Coulson in the Thompson's barn, where Thompson and his son have built an elaborate model train set. Derik tells Coulson that he could bring back his memories by experiencing pain, which is why he was killing the former T.A.H.I.T.I. test subjects. Couslon meanwhile realizes Thompson's train set was actually the runes, revealing they are meant to be viewed in three dimensions. As Derik is threatening Coulson with a knife, Thompson manages to cut out of his ties and free his family. Derik realizes his prisoner was escaping and throws his knife at him, but Thompson manages to catch the blade in mid-air and throw it back at him. Derik dives out of the way, but the knife cuts Coulson out of his ties. Derik attacks Coulson while he tries to get his assailant to realize what he has discovered about the carvings. Coulson eventually gets Derik over a railing looking down on the train set, but Derik refuses to open his eyes. Simmons and Skye (who was freed after Simmons realized what Coulson had done) arrive on the scene and pull their guns on Coulson and Derik, threatening to shoot both of them as Coulson may have gone crazy like Garrett had. Just as they are about to open fire, Derik opens his eyes and realizes what Coulson had been trying to show him - the carvings aren't as much a map as they are the blueprints to a city.

After turning Derik over to the authorities, Coulson and the team return to the Playground. Bakshi had since been placed in Ward's cell, and Coulson orders Skye to dig through his smart phone to uncover any information about Hydra and their plans. Coulson then debriefs his team on what he found out about the carvings. He no longer has the cravings to make them, and plans to use this information to get ahead of Hydra in their race to uncover its secrets. Elsewhere, Ward shaves his head and facial hair and calls Bakshi's phone. Skye answers the call while pretending to be a Hydra agent, but Ward immediately sees through her facade. He says she hopes she likes the "gift" he gave her with Bakshi, and promises that he'll be sending more gifts her way in the near future. Ward then hangs up, and starts making his way towards his brother.

Retrieved from "https://marvel.fandom.com/wiki/Marvel%27s_Agents_of_S.H.I.E.L.D._Season_2_7?oldid=5505934"
Community content is available under CC-BY-SA unless otherwise noted.