"The Things We Bury" 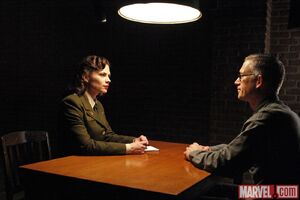 Episode Title
"The Things We Bury"

Appearing in "The Things We Bury"

Synopsis for "The Things We Bury"

In 1945, Dr. Whitehall is using the Diviner to experiment on prisoners. The first is killed, but the second, a young woman, survives and activates the Diviner. While Dr. Whitehall is expressing his curiosity on how she could survive touching the item, one of his subordinates informs him of the Red Skull's demise.

In the present day, Dr. Whitehall grills his current staff of scientists over their lack of results experimenting with the Diviner. He has two of his men drag Skye's father into his office, where he offers to "fill in the blanks" in Hydra's knowledge about the device. When Dr. Whitehall calls the item a weapon, Skye's father interrupts him and tells him he is thinking too small. He reveals that the item is a key, allowing those it "divines" to be worthy to enter a temple.

Agent Morse is in the middle of interrogating Bakshi. Although he has given away little information, Agent Morse believes he slipped when he called Dr. Whitehall a "disciple" of the Red Skull. Simmons and Agent May dive into Agent Carter's files on the Obelisk from World War II, and discover a Hydra scientist by the name of Dr. Werner Reinhardt studied the device. While looking for more information on Dr. Reinhardt, Hunter finds the SSR's file on him, which includes a picture of him. Simmons recognizes the picture as that of Dr. Whitehall himself, but when May finds another picture of him as an old man they are all left wondering how he was able to turn back the clock in his aging.

Dr. Reinhardt is being held prisoner in an SSR facility known as "the Rat" awaiting to be interrogated by Agent Peggy Carter. When she enters the room, he compliments the trick she was playing on him by leaving a pen on the table, which he could have used to try and free himself or commit suicide. Dr. Reinhardt tries to strike a deal with the SSR, offering his services as a scientist to them in exchange for his freedom, but Agent Carter refuses his offer due to the horrors he kept in his lab. He then tells Agent Carter a story from the East about "blue angels" falling from the sky to save humanity. Agent Carter laughs off the story and says she didn't think Dr. Reinhardt would be a believer in such stories, but he says he's dedicated his life to it, but that the angels came to Earth not to save it but to conquer it.

In the present, Skye's father questions how Dr. Whitehall heard the angels would "conquer" humanity when really they came to end it, save a chosen few. The Diviner would choose which select humans would inherit the Earth. Citing how he has nothing to use, Skye's father offers to take Dr. Whitehall to the city and get him inside the temple the Diviner opens.

Meanwhile, Senator Christian Ward has arrived at his summer home. After calling his wife to explain his absence, he calls his mistress to let her know he has arrived; however, the call is interrupted when Grant Ward attacks his car and abducts his older brother. He ties up the Senator's hands and forces him to walk down a dirt road, all while he's begging his younger brother to let him go and confess for his past crimes. Grant refuses and orders Christian to start digging up the well where he, years earlier, tried to kill their brother Thomas. Once he finishes uncovering the well, Christian attacks his brother with the shovel and tries to get away, but Grant stops him and threatens to throw him into the well. Senator Ward breaks down and apologizes to his brother for manipulating him into killing their brother because Thomas was the only one their mother did not torture. Grant helps him to his feet and gives his brother a hug, apparently forgiving him for all their bad history together.

With their new information, Agent Morse goes back to interrogating Bakshi. She believes she has cracked his motives, thinking Bakshi is loyal to Dr. Whitehall because he is most afraid of disappointing him. Once Agent Morse reveals to him that S.H.I.E.L.D. has discovered Whitehall's age and true identity, Bakshi swears his loyalty to Hydra and bites down a cyanide pill hidden in his cheekbone. Hunter rushes into the interrogation room to keep Bakshi from dying. The two of them are barely able to get Bakshi out of there alive and put him on life support.

Hunter and Morse soon get into an argument over the latter pushing Bakshi too hard before changing the subject to the trust issues from their previous marriage. Soon enough, they begin making out in a S.H.I.E.L.D. truck.

Coulson meanwhile has taken a small team that includes Skye, Triplett, and Fitz to Hawaii to gain access to a satellite that could scan the globe and find patterns similar to the map of the mysterious city he has been looking for. Since the facility that the satellite feeds to is too heavily guarded, Coulson has his agents plant a watch and a button on two military officers that will cause the feed to go down. The team heads to Australia, where there is a secondary facility the satellite feeds to in the case the first goes down. Coulson, Trip, and Fitz head inside the facility while Skye stays behind on the bus, but Hydra - who now also know of the city thanks to the information Skye's father gave them about the Diviner - have beaten them there. In the ensuing fire fight, Trip is mortally wounded and starts to bleed out, but Skye's father approaches them and offers to save his life. He reveals his identity to Coulson when he lets slip he knows his name, and purposefully botches the surgery and severs one of Trip's arteries, holding his life as a bargaining chip. He starts talking to Coulson about the Diviner, the city and temple, and his daughter until he snaps when Coulson calls Skye by that name. He then tells Coulson he needs to immediately apply a clotting agent to Triplett's wound the moment he takes pressure off the artery, giving him time to escape. Once Triplett's condition is stabilized they take him back to the Bus, an soon after the computer finds a possible location for the city.

Back at the Hydra offices, Grant Ward is meeting with Dr. Whitehall. Ward has since killed his Christian and their parents, framing the scene to look like a murder-suicide committed by his brother. Speaking as someone who spent a significant portion of his life incarcerated, Dr. Whitehall knows the value of a second chance, and reinstates Ward as an agent of Hydra. He then has Skye's father brought to his office to meet the new recruit, as he is an expert on S.H.I.E.L.D. and Coulson's team.

Agent Carter begins another interrogation of Dr. Reinhardt. He again offers his services to the SSR, citing the deals the organization recently struck with other Hydra scientists. Agent Carter again refuses, puts him back in his cell, and tells him no one will be coming for him anymore. 44 years pass since then, and Dr. Reinhardt has become an old man. Two S.H.I.E.L.D. agents arrive with a wheelchair, and reveal themselves as Hydra agents sent to retrieve him after Undersecretary Pierce granted him a pardon. The two agents take Dr. Reinhardt to Austria, where they have gathered the doctor's former test subjects. Among them are the young woman who could touch the Obelisk, and much to Dr. Reinhardt's surprise she has not aged a day since he last saw her. He orders his men to take her to the operating table, where the doctor removes her organs. He then has them placed inside him, causing his age to revert to what it was like before he was imprisoned.

Her butchered body is found by Skye's father, who swears he'll have revenge on the one who did this to his love.

Retrieved from "https://marvel.fandom.com/wiki/Marvel%27s_Agents_of_S.H.I.E.L.D._Season_2_8?oldid=5505936"
Community content is available under CC-BY-SA unless otherwise noted.