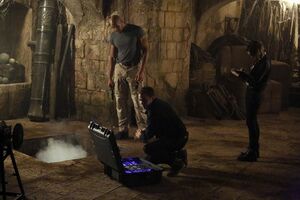 I'm Sam, Billy's the shorter one.

Appearing in "...Ye Who Enter Here"

Synopsis for "...Ye Who Enter Here"

Coulson wakes up Skye from a vivid nightmare once the Bus arrives back at the Playground. They provide the rest of the team with an update on the hunt for the mysterious city depicted in the carvings. Skye had satellites scan the Earth looking for any formations similar to the tallest structures in the city, and found a potential match in Puerto Rico. As they are getting ready to leave, Billy and Sam Koenig contacts the Playground from Vancouver, and reports that a team of Hydra agents led by Agent 33 - who is still wearing Agent May's face - tried to abduct Raina. Coulson divides the team into two groups: May, Skye, Hunter, and Trip go to Canada to assist the Koenigs in protecting Raina, while he, Bobbi, Mack, and FitzSimmons go to Puerto Rico to look for the city. Coulson particularly wants Skye to go to Canada, because he believes Raina might open up to her and because he is worried the team will run into her father in Puerto Rico.

In Canada, Hunter and May take down two teams of Hydra agents looking for Raina. Skye goes to Billy's safehouse to retrieve Raina, but they are ambushed by Agent 33. Skye is outmatched, but her life is saved when Hunter arrives on the scene at the last second. On the way back to the Bus, Skye lets Raina know that Hydra has the Obelisk, leading Raina to realize Whitehall wants to capture her because she can touch the device. Skye doesn't believe her, so Raina starts telling what she knows about the Obelisk, that is supposed to lead the people it deems worthy to a city. While they are talking, May runs over the remaining Hydra agents with the van she stole from them and takes them back to the Bus. Skye and Raina resume talking once they are back on the plane. She tells Skye about her father, and how he rescued her from a life of petty thievery. She then starts talking about the Obelisk again, and how it came from "blue angels who fell from the sky" known as the Kree. Raina then tells Skye that anyone unworthy who enters the city suffers a terrible fate. Skye realizes the city the Obelisk leads to must be the same city Coulson is looking for, so she frantically tries to contact them to keep them from entering the city. She is unsuccessful as the plane's communications are jammed, followed by a message from Daniel Whitehall warning them that quinjets have surrounded the Bus and will shoot them down unless they hand Raina over to him.

In Puerto Rico, one of Bobbi Morse's contacts leads the team to the fort of San Cristobal, a centuries-old fort near San Juan that has a reputation for being haunted. Mack and FitzSimmons start looking around the fort when a hole in the floor opens up and reveals a deep chasm. They show Coulson and Morse what they have found and send Dwarf robots down into the whole to search the area, but the machines are disabled once they get too deep. Mack goes down into the chasm to repair them, but once he reaches the bottom he activates a design in the ground that cripples his hand with immense pain. Once they bring Mack up, he starts attacking the group. Fitz tosses an I.C.E.R. to Coulson, who uses it on Mack while he is strangling the life out of Bobbi. The I.C.E.R. has no effect on him, but Mack drops Bobbi and starts charging towards Fitz and Coulson. Fitz pulls out a real gun, not an I.C.E.R, and points it at Mack and threatens to shoot. Fitz is hesitant to fire, but Bobbi sneaks up behind Mack and incapacitates him by touching the electrified ends of her staves to his neck. Mack collapses and falls back down into the chasm, and Coulson orders them to cover the hole. Although they are reluctant to seal up their friend, Coulson assures them that Mack is gone.

Meanwhile, Whitehall's "best man" Grant Ward has boarded the Bus to retrieve Raina. Facing no other choice, S.H.I.E.L.D. hands her over to Hydra, but Ward makes a new demand - they hand over Skye as a hostage or they will be shot down. Skye eventually agrees to go with him, and Raina reminds her to take her tablet with the map of the city with her before they leave. Elsewhere, Agent 33 reports back to Daniel Whitehall. She tells him Ward retrieved Raina and took Skye as a hostage, but that he didn't shoot down the plane. Whitehall is furious that Ward would make that decision on his own, and has Agent 33 call his fleet and order them to attack the Bus.

Retrieved from "https://marvel.fandom.com/wiki/Marvel%27s_Agents_of_S.H.I.E.L.D._Season_2_9?oldid=5505941"
Community content is available under CC-BY-SA unless otherwise noted.