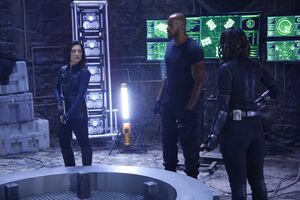 Hey! What part of 'that's an order' do you not understand? Coulson put me in charge to make the hard call, and that's what I'm doing. We can't afford to lose our best agents in one fell swoop. Not here! Not tonight!

Fitz, Ward and the Hydra team arrive on the alien world and being scouting the area. Fitz tries to grab Ward's gone, but Ward easily overpowers him and Fitz rolls down a hill. At the bottom, the see a large monument built in the shape of Hydra's symbol. Fitz leads Ward and his men through the wasteland until he finds the opening to Will's cave and jumps in. He finds Will asleep inside, but Ward follows him and threatens to kill Will. Fitz stops him, saying that Will is their only chance to find the portal back to Earth. Elsewhere on the planet, Coulson wakes up from a dream where Rosalind reminds him that his team needs him.

Back on Earth, Mack devises a plan to save Coulson and FitzSimmons. Since Hydra's defenses will just shoot them out of the sky if they get too close, two teams of agents will sneak into the castle and confront Hydea head-on. Mack takes Bobbi and Hunter to secure the portal, while May and the Secret Warriors find FitzSimmons. Meanwhile, Simmons has escaped from Malick's men holding her prisoner, and while trying to hide from them finds the units containing the ATCU's Inhumans. She finds S.H.I.E.L.D.'s own containment unit, with Dr. Garner still inside. He begs Simmons to let him out, promising to protect her from Hydra in exchange for his freedom. As Malick's men get closer, Simmons frees him, and hides behind the containment unit while hearing Lash slaughter them.

The Secret Warriors run into Giyera. He telekinetically lifts a gun and fires it at Daisy, but Joey dodges in front of them. Joey's powers automatically melt the bullets before they hit him. Lincoln uses his powers to take out Giyera. May meanwhile finds Simmons, and she tells May that Andrew is not only there but she let him out. The team regroups in the portal chamber, but May separates from them to find Andrew. They ask Simmons about the thing Hydra wants to bring back from the other side of the portal. After how she describes it, Lincoln suggests they destroy Hydra's equipment for controlling the portal, leaving Coulson and Fitz behind to assure that thing doesn't come through instead. When Daisy says they can't abandon the Inhuman prisoners, May comes back and informs them that Lash killed them all. Mack decides that everyone else will go back to the plane while he stays behind to wait for Fitz and Coulson. If the other thing comes through, they're to reduce the castle to rubble with Zephyr One's weapons. Daisy volunteers to stay behind with him.

Back on the other world, Will leads Fitz and Hydra into one of the no fly zones where the entity was most active. A sandstorm comes through, separating Ward and a few other Hydra soldiers from the rest Will, Fitz and the rest of the team. Will uses this to his advantage and kills the Hydra soldiers surrounding him, and going off with Fitz towards the portal. Ward tries to stop them when he realizes what happened, but from out of nowhere his men are shot dead while another merely takes him down. Coulson appears and takes Ward as his prisoner. Coulson and Ward try to catch up to Will and Fitz, with Ward trying to talk Coulson into sparing him. Will and Fitz, meanwhile, get closer to the place where the portal will open, and see a ruined city in the distance. Will tells Fitz about the doomed civilization that used to live on the planet while Fitz tends to Will's wounded leg. Just as he asks how Will could know so much about the planet's history, Fitz discovers his wound is through to the bone. Will reveals himself to be the creature Hydra wants to bring back, and that the real Will died trying to save Simmons. Coulson sees "Will" trying to kill Fitz from a distance and opens fire at him. Ward takes advantage of this distractions to get his hands free and attack Coulson. The portal opens up, and an injured "Will" shambles toward it. Fitz tries to use Coulson's dropped gun to stop him, but it's no use. Once it's out of bullets, he fires a flare at him instead, and the flare stops "Will" in his tracks and sets his body on fire.

Coulson has Ward pinned to the ground when Fitz yells to him that the portal is closing and he should just leave Ward there to die. Instead, Coulson uses his prosthetic hand to cave in Ward's chest, finally killing him. He drops his hand by Ward's corpse and goes towards the portal. Back on Earth, Mack has given the order to destroy the castle. May thinks they died in the destruction, but Mack tells them to open up the doors for the containment unit flying towards them. Mack, Daisy, Coulson and Fitz have an emotional reunion with the rest of their team, and Simmons realizes that Will isn't with them.

Elsewhere, Malick makes his escape from the castle when his car is stopped in the middle of the road. Standing in front of him is Hydra's Inhuman king in the form of Grant Ward.

Retrieved from "https://marvel.fandom.com/wiki/Marvel%27s_Agents_of_S.H.I.E.L.D._Season_3_10?oldid=5258383"
Community content is available under CC-BY-SA unless otherwise noted.