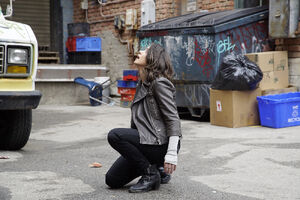 S.H.I.E.L.D. responds to an emergency dispatch from Brooklyn. The caller mentions both Hydra and Daisy Johnson by name despite there being no way he could know about either of those. The team arrives in Brooklyn to question him, but he tells Daisy he saw all of this happen already when he touched Charlie Hinton, a homeless man who lives in the alley behind his grocery store. A Hydra plane appears to capture Charlie moments after the grocer aid they would. Despite S.H.I.E.L.D. and the ATCU's best efforts, Charlie is pulled onto to the plane and the grocer is shot down, as he predicted. Daisy tries to pull Charlie back down to the ground, but when she touches his hand she is given a vision of the future just like the grocer. She sees a woman crying, Lincoln's face covered in blood, herself fighting a team of agents before Coulson shoots her, and Charlie's death at her side on a rooftop. Hydra takes Charlie back to their headquarters as Gideon Malick shares dinner with Hydra's Inhuman founder, who is now inside the fully-rejuvenated body of Grant Ward. The Inhuman wonders what power he could give to Gideon Malick when he already has enough money to buy anything he wants.

Daisy tells the rest of the team what she saw in her vision when they get back to the Playground. Coulson decides that the best way to avoid those events is to leave Daisy behind at the Playground and take May on the mission to save Charlie in her place. While the team tries to figure out Daisy's visions take place, Gideon Malick takes Charlie, Giyera, and his Inhuman superior to that place - a skyscraper owned by the Transia Corporation. Malick tries to convince the corporation's executive board to sell him the entire company in exchange for the prosthetic hand Coulson left behind on Maveth, but when the CEO refuses, the Inhuman in Ward's body has Charlie show him what he'll do to them if they do not sell the company. The CEO doesn't believe what he saw, causing the Inhuman to devour his board. With only Transia's CEO left alive, Hydra takes what they want from the company anyway - a pair of prosthetic arms from a high-powered exoskeleton. The Inhuman orders Gideon Malick to wear the prosthetic so the enhanced strength it grants him allows him to feel the power he has always wanted. Malick puts the arms on, and after he tests out their strength, his Inhuman superior has him kill Transia's CEO.

Meanwhile, the S.H.I.E.L.D. team prepares May to complete her mission as quickly as possible so she can rescue Charlie before Hydra can take him to the rooftop. Coulson is made aware that his other agents have found the building where Daisy's visions took place. Just as the team is about to leave to rescue Charlie, an alarm sounds indicating an intruder at the Playground. A team of heavily-armed agents leads Andrew Garner into the Playground. Dr. Garner turned himself in since he feels his next transformation into Lash will be permanent, and he came to say goodbye to May. Coulson takes May off the mission so she can be with Andrew, so Daisy convinces Coulson to let her rescue Charlie like she feels she was meant to. May stays behind with Andrew while he takes Simmons' experimental Terrigenesis cure. He apologizes to his ex-wife for how he has treated her since he became Lash. He feels the change coming on and locks himself inside the containment unit. May says goodbye to her ex-husband as he changes into Lash for one final time.

The team arrives at the Transia building. Daisy is sent in by herself at first, but Coulson and Lincoln go in after her when the rest of the team sees Grant Ward in the building's security footage. Daisy fights off a team of Hydra agents, and Coulson at the last second an agent hiding behind a one-way mirror pointing a machine gun at her. Coulson updates her on the situation with Ward and tells her to hurry as Malick has already brought Charlie to the roof. Meanwhile, Lincoln confronts Giyera in a hallway, but with a flick of his wrist Giyera sends a fire hydrant flying into Lincoln's head. Lincoln gets back up, his face bloodied from the wound, and sees the Inhuman in Ward's body before Coulson orders him to retreat. Daisy confronts Gideon Malick on the roof, but Malick's prosthetic allows him to easily overpower her. Charlie saves her from the brink of death by touching Malick, giving him a vision that forces him to stop pummeling her. Malick then unleashes on Charlie before escaping in his helicopter. Charlie lays down next to her and makes her promise she'll protect his daughter. Before he dies, he gives Daisy one final vision - a vision of a space shuttle of some kind exploding with a S.H.I.E.L.D. agent on board.

Elsewhere, Hydra's Inhuman founder orders Giyera to collect the remaining pieces of the exoskeleton. Giyera gets a call from Gideon Malick, who reminds Giyera that he works for him. Giyera, however, says he is right where he needs to be before hanging up, and tells his new master that Malick sounds afraid.

Retrieved from "https://marvel.fandom.com/wiki/Marvel%27s_Agents_of_S.H.I.E.L.D._Season_3_15?oldid=5612824"
Community content is available under CC-BY-SA unless otherwise noted.