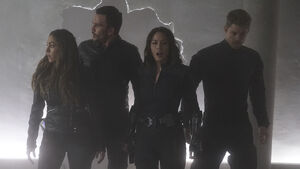 For one reason or another, each of us has been given a gift. Let's put them to good use.

Appearing in "The Team"

Synopsis for "The Team"

Daisy and Lincoln pick up Joey Gutierrez and Elena Rodriguez to assemble the Secret Warriors and save the rest of the team from Hydra. Meanwhile, Coulson and the S.H.I.E.L.D. agents on board the Zephyr have barricaded themselves inside a storage room. A team of Hydra agents try to break down the door so Lucio can incapacitate them with his Inhuman powers. Fitz pumps chlorine gas into the hallway leading to the room to hold off them off. The Secret Warriors break into Malick's base and split up to rescue them. Joey and Elena clear the way to the Zephyr, Daisy goes to the hangar's control room, and Lincoln finds and captures Gideon Malick. Lucio petrifies Lincoln when he moves Malick onto the plane, but Joey stabs Lucio through the heart with a piece of a metal pipe he melted. With the team secured, S.H.I.E.L.D. escape from the base in the Zephyr. As Giyera and the Hive watch the plane take off, the Hive assures his minion that this was not a total loss, as they now have someone inside S.H.I.E.L.D.

The team returns to the Playground. Coulson interrogates Gideon Malick, who reveals that the Hive killed his daughter and might have infected one of the Secret Warriors with his parasites, giving him complete sway over their actions. Although he has little reason to do so, Coulson believes Gideon Malick's warning and has Mack lock down the Playground. Coulson lets his human agents in on the situation, causing the Inhumans on the Secret Warriors to become concerned that S.H.I.E.L.D. has turned on them. Malick gives up everything he knows about the Hive when Coulson appeals to the memory of his daughter. Coulson is pulled out of the interrogation when FitzSimmons find evidence of the Hive's infection when they conduct an autopsy on Lucio, confirming what Malick said about the ancient Inhuman's abilities. As Coulson, Mack and May debate which of the Secret Warriors could be infected, the power to the Playground cuts out. FitzSimmons investigate a pulsating blue light coming from the interrogation room only to find Malick's corpse lying on the ground next to a splinter bomb.

Coulson's agents hurry towards the source of the explosion. The Inhumans demand to know what's going on, so Coulson orders Daisy to control her team until S.H.I.E.L.D. can figure out which of them is under the Hive's control. The Secret Warriors refuse to surrender to Coulson and barricade themselves in the Playground's common room. While Coulson's agents figure out what to do next, the Inhumans accuse each other of being the Hive's mole. Before their distrust of each other can get out of hand, Daisy tricks the team into going to the containment room by making them believe they were heading for a secret emergency exit. Coulson accuses Lincoln of working with the Hive because the Kree artifact he took from James was found in his locker when it should have been in the asset room. He thinks Lincoln was trying to get that to the Hive, and that he's been under his control since he saw Grant Ward in the Transia building. Lincoln denies Coulson's accusations and tries to escape, but Daisy pushes him into the containment unit with her powers.

Coulson has the other Inhumans put into separate rooms so Simmons could check them for the Hive's parasites. Coulson disbands the Secret Warriors until S.H.I.E.L.D. can figure out a way to defeat the Hive. Joey and Elena clearly feel betrayed, and demand they leave. FitzSimmons try to figure out a way to reverse the Hive's infection, but when they come up empty-handed they finally need to do something about the romantic tension between them. Meanwhile, Daisy breaks out of her cell, and then tries to escape with Lincoln. He realizes that Daisy is the infected by the Hive, and that she's responsible for killing Malick. Lincoln unsuccessfully tries to talk her out of the Hive's control. She has no choice but to leave Lincoln behind, and after stealing a number of supplies from S.H.I.E.L.D. leaves in the Zephyr. As she boards the plane, Daisy uses her powers to create an earthquake that leaves much of the Playground in ruins.

Back in Malick's bunker, Giyera warns the Hive that Malick might turn on Hydra because of his daughter's death. The Hive knows that Malick is likely already dead, and tells Giyera that their next move is to find Skye. He puts takes Malick's notched white rock out of Paradise Lost and puts it down on a table. For now, he's resolved to spend the almost $1 billion in Gideon Malick's estate.

Retrieved from "https://marvel.fandom.com/wiki/Marvel%27s_Agents_of_S.H.I.E.L.D._Season_3_17?oldid=5505985"
Community content is available under CC-BY-SA unless otherwise noted.