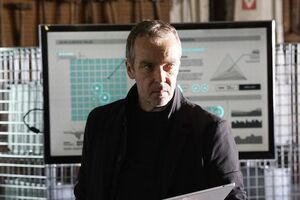 Thousands of years ago, Kree Reapers capture a primitive hunter. They take him onto their ship, and subject the hunter to experiments to combine his DNA with that of the Kree. The hunter's body is covered in a stone-like cocoon - Terrigenesis. The Hive is born.

Hive finishes telling Daisy his origin story. Nearby are the three remaining human members of Hydra's Inner Circle, the others having abandoned Hydra after Gideon Malick's betrayal. The Hive promises them their reward for their loyalty - they, too, will be transformed into Inhumans. Hive has Dr. Holden Radcliffe recreate the Kree experiments, but the three test subjects are all killed when their bodies reject the procedure. Hive is furious at Dr. Radcliffe's failure as he was assured the procedure would have worked. Radcliffe, however, chalks the failure up to having the wrong material. The Hive's DNA mixed with Grant Ward's is insufficient; in order for the experiment to work, Dr. Radcliffe needs DNA from a real Kree.

At the Playground, FitzSimmons believe they might have developed a cure for the Hive's parasites. Simmons believes the cure is still too dangerous to test, but Fitz thinks Hive's threat is too real to not test it immediately. Not helping is that every Inhuman they know is either in hiding or already working with Hive. Before they can come to some agreement on what to do, Lincoln volunteers to test the cure on himself despite knowing the risks. Meanwhile, S.H.I.E.L.D.'s satellites are sweeping the country trying to find some sign of Daisy. One catches her leaving a mechanics garage in the town Hive bought in Wyoming. They also notice the town is now crawling with soldiers, Malick's bodyguards relocated from the bunker in the Netherlands. Coulson and Mack argue over their next move. The Director thinks Daisy is setting a trap for them, while Mack believes some part of Daisy is fighting the Hive's parasites and wants them to rescue her.

Despite their disagreement, Coulson sends a team to the town anyway. But this is not a rescue mission; their only goal is to kill Hive. Mack and May lead a team of agents armed with the best of S.H.I.E.L.D.'s weaponry, including enough splinter bombs to "turn a small army into pixie dust." Despite the single purpose of their mission, Mack still wants to save Daisy from the Hive, as he blames himself for not catching the parasites' affect on her mind sooner. They land in the town, but soon come across James. May corners him in a bar, but rather than fight him she pretends to be a Hydra agent and flirts with him to get information about the Hive's plan to transform ordinary people into Inhumans out of him. She knocks him out once he gives up that Hive might still be in the abandoned mining facility. Back at the Playground, Lincoln gets tired of waiting for FitzSimmons to give him their cure and takes it himself. The cure causes him to briefly lose control of his powers, sending bolts of electricity flying all overt the lab, before losing consciousness.

Hive summons Daisy to the town's church to ask her if she's ready to fight her former friends in S.H.I.E.L.D. She swears she is, and that she would like to put them through the Kree experiments once Dr. Radcliffe perfects the procedure. Hive warns her that they might not be open to this idea, but Daisy assures him she would rip their hears out if need be. With Daisy's allegiance a certainty, Hive tells her to get ready to fight what made him. Hive summoned two Kree Reapers to Earth so Dr. Radcliffe could use their DNA to recreate the experiments that created the Inhumans. The ancient Kree artifact Hive recovered from James is in actuality a beacon them, as they have been waiting in stasis near Earth waiting to be called back to the planet. Mack and the team of agents find the beacon in the mining facility, but soon receive an order to get out of there before something comes in from overhead.

The Kree Reapers crash over the facility and get ready to hunt the Inhumans they were summoned to kill. One of the Kree finds Alisha and kills her last double before finishing her off. The Kree then finds Dr. Radcliffe in his laboratory, but Daisy kills the Reaper before it can attack him. She then orders Dr. Radcliffe to drain his spine to get the Kree DNA he needs. Mack recognizes Daisy's powers from a distance and breaks off from the rest of the S.H.I.E.L.D. team to face her in Dr. Radcliffe's lab. Daisy wants him to become an Inhuman like her, but Mack just wants her to come back to the Playground. The Hive's control over her has Daisy convinced that Coulson and S.H.I.E.L.D. do not care about their agents or world peace. Mack realizes that he cannot save Daisy, so he destroys the Kree Reaper's corpse to save everyone else. Daisy attacks him with her powers, pushing him onto the street and nearly crushing him with her tremors. Meanwhile, Hive fights the other Kree Reaper in the church and kills him after working through his millennia-old grudge. The S.H.I.E.L.D. team fires at the Hive, but none of their weapons have any effect on him. Hive easily repairs any damage they do to Ward's body. The team gets out of the church before the ancient Inhuman can get them, and finding Mack badly wounded in the middle of the street call in an emergency evacuation.

The team returns to the Playground defeated. Mack admits to Coulson that he was wrong about Daisy and that she's fully devoted to the Hive now. They get some solace out of knowing they stopped Hive's plan to turn people into Inhumans by destroying the one Kree's body, but, as the rest of the team point out, that victory might have only been a hollow one when Hive himself seems unstoppable. In the med bay, Simmons updates Lincoln on the mission's failure to rescue Daisy. Lincoln lashes out at her in frustration over being held back from fighting Hive. Before she leaves, Simmons tells him that their cure didn't work, and the sample of Lincoln's tissues infused with the substance had no effect on the parasites.

Dr. Radcliffe finishes patching up Daisy's wounds from her fight with Mack and the Kree. Hive has the heart of the Kree Reaper he killed, but is visibly upset with Daisy for allowing Mack to destroy the other body. Daisy, however, thinks she knows of another way to get Kree DNA. She asks Hive to search Grant Ward's memories for the time when Coulson used a substance based on Kree blood to revive her after Ian Quinn shot her. If Hive needs more Kree blood, he can drain it from her body.

Like this? Let us know!
Retrieved from "https://marvel.fandom.com/wiki/Marvel%27s_Agents_of_S.H.I.E.L.D._Season_3_19?oldid=6498164"
Community content is available under CC-BY-SA unless otherwise noted.