"Purpose in the Machine" 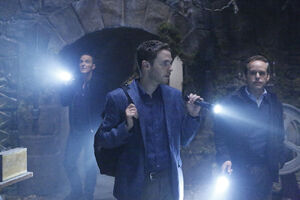 Appearing in "Purpose in the Machine"

Synopsis for "Purpose in the Machine"

In 1839, a group of English gentlemen draw rocks out of a bag. One, Lord Manzini, draws a white rock, and is locked in a room with the Kree monolith. While the others wait for him to return, the monolith swallows him.

In the present day, Coulson's team pulls Fitz out of the monolith's container before it can liquefy and swallow him. Fitz has sand on his finger that once dated is revealed to be a billion years older than the Earth. He comes to the conclusion that the sand must have come from some place the monolith is a portal to; some place that Simmons must be. Since the monolith has been studied for centuries, Coulson decides to have Professor Randolph, an Asgardian who's been living on Earth for centuries, help them study it. Before they leave, Hunter also leaves for his own personal time which he plans to use to take down Ward. Bobbi asks him to not die out there while Coulson asks he make sure Ward does. Coulson, Fitz and Bobbi go to Norway to find him in a Norwegian prison for damaging property while he was drunk. He rejects Coulson's offer, preferring to keep a low profile in light of all that's been going on in the world recently. But when Coulson threatens to tell the ATCU about him, Randolph rips the bars off his cell and leaves with them. Meanwhile, Dr. Garner arrives at the Playground to assess Joey Gutierrez. Daisy asks him if his ex-wife will ever come back from her vacation, but he only says she should ask her that instead.

Randolph takes a look at the monolith and watches it collapse and take back its shape. He asks Fitz what would trigger its change. Fitz says it's completely random, but Randolph assures him it must be synchronized with something, even if it relates to another planet. Bobbi shows him the scroll that Fitz found in Morocco. Randolph recognizes the lettering from an English castle he visited in the 1850's. Coulson, Fitz, Randolph and Bobbi fly to England to investigate the castle. Inside, they find a secret passage that leads to a room with a large machine. They hear movement beneath them, and after tampering with the machine they uncover a hole in the middle of the floor filled with a black liquid. Fitz realizes the hole must have been used to hold the monolith. Coulson calls the Playground to tell Daisy and Mack to load up the Zephyr One and meet them there.

Fitz gets the machine running shortly after they arrive. The liquid reacts to the powerful vibrations the machine produces, but they also cause Daisy to collapse. Fitz shoots a flare into the liquid and watches it vanish. The machine falls apart before Fitz can conduct any more tests on it. Coulson helps Daisy recover, and she finds out no one heard the pulse but her. Fitz thinks the machine didn't activate the liquid, but that it's purpose was to vibrate the room at a frequency that would cause it to react, a frequency Daisy could probably use her powers to reproduce. After they stabilize the area, Daisy starts shaking the room. The liquid starts reacting again, and Fitz ties a cord around his waist and jumps in. He arrives on the windy alien planet and starts calling out to Jemma. Miraculously, she can hear Fitz and starts calling out to him. They crawl towards each other, but as they get close enough to touch Coulson orders his team to stop the test and pull Fitz out of there. He tries to stay on the planet long enough to grab Simmons. Daisy stops the vibrations, and the liquid erupts, covering the room in black dust. Fitz made it through the portal and sits up in the bottom of the pit, and pulls Simmons up with him. Some time later, Professor Randolph asks Coulson what Daisy is. When Coulson tells him they call themselves "Inhumans," Randolph says he hasn't heard that word in a long time.

Meanwhile, Agent May has been with her father in Arizona. He was recently injured in a hit-and-run that she thinks Ward might have been behind. While they are reminiscing about May's childhood, she sees someone outside come to the door. May grabs a knife, goes to the door, and before she can see who's there she grabs him and puts him in a hold. However, it wasn't some assassin there to kill her or her father, but Lance Hunter. He and May talk in the backyard about Hunter's plan to take down Ward. Since Ward never met him, Hunter plans on going undercover as a potential Hydra recruit. Although May is reluctant to get involved in Hunter's mission, she agrees to help him after talking with her father. She soon after gets a call from Andrew about Simmons' recovery, news that Hunter wants to celebrate over.

Ward, however, has been busy trying to get his hands on a kid. He and his right-hand man Kebo find him on a yacht in Ibiza. The two of them sneak onto the boat, take out the kid's guards and abduct him. They take the kid back to their base, where Ward forces him to give up his bank information even if Kebo has to torture it out of him. Kebo starts to rough him up when he refuses to give up any information, but the kid stabs Kebo with a razor he found on the floor and viciously beats him. The kid asks, "Do you even know who the Hell I am?," only for Ward to come into the room and reveal he knows his true identity - Werner von Strucker, son of the recently deceased Hydra head Baron Wolfgang von Strucker. This whole thing was a test to prove Werner's worth to Hydra, and he passed. Ward brings him into his organization, showing him a world his father rarely let him see. For his first mission, Ward has him go to Culver University disguised as one of Dr. Garner's students.

Like this? Let us know!
Retrieved from "https://marvel.fandom.com/wiki/Marvel%27s_Agents_of_S.H.I.E.L.D._Season_3_2?oldid=6498165"
Community content is available under CC-BY-SA unless otherwise noted.