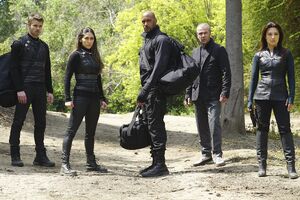 He can't be contained. He has to be destroyed.

Daisy wakes up from a nightmare where she and Coulson are the only people left alive on an Earth Hive devastated like he did the alien world. Simmons comes to her containment unit soon afterwards to clear up the information she gave them about Hive's plan. One word in his plan has S.H.I.E.L.D. stumped - "absolution." Meanwhile, the rest of the S.H.I.E.L.D. team is scrambling to stop the launch of the warhead carrying Dr. Radcliffe's pathogen that will transform ordinary people into the primitive Inhumans under Hive's sway. Hive and his henchmen have taken over a missile silo on an island in the Pacific, meaning the team only has a short time to act before the missile is launched. Agent May takes a Quinjet carrying Mack, Lincoln, and Elena to the island to infiltrate the silo and stop the launch. Coulson, Fitz and General Talbot try to get the override codes for the launch from the American government without alerting them to Hive's plan. Using some digital trickery, Talbot and Fitz get permission to use the codes, but Coulson has to first pick them up in person. He sends the lengthy code back to the Playground just in time to stop the launch with only seconds remaining on the clock.

Hive immediately understands that S.H.I.E.L.D. sabotaged his plans. He lashes out at Dr. Radcliffe, and orders him to start up the launch sequence again. Radcliffe tries to tell him he has no idea how to do this, but realizing that his inability to launch the missile would only result in Hive turning him into his next meal gets Dr. Radcliffe to go to the silo's computer room and try. Hive orders Giyera, James and the Primitives to bring him the S.H.I.E.L.D. agents who stopped the launch, but Hive himself corners Lincoln in a dark room. Hive taunts Lincoln over how he took Daisy away from him. Lincoln lures him into a hallway where Mack and Elena have set up T.A.H.I.T.I.'s memory machine. Hive falls into S.H.I.E.L.D.'s trap as they activate the machine as he walks through it. The sudden influx of memories from Grant Ward, Will Daniels, Nathaniel Malick, and all of his other hosts overwhelms the ancient Inhuman, giving the team enough time to escape from the base with the refugees and Dr. Radcliffe, who turned himself over to S.H.I.E.L.D. for his own safety. Hive orders Giyera and James to follow their "Absolution" plan while he confronts the S.H.I.E.L.D. team. May throws a disc under his feet that sends a gel matrix cube crashing down on top of him. The cube fills with the gel, trapping Hive inside.

The team returns to the Playground with Dr. Radcliffe and Hive as their prisoners. Coulson and General Talbot threaten Dr. Radcliffe with the worst punishment imaginable if he cannot find a way to reverse the primitives' transformation. FitzSimmons take time away from helping Dr. Radcliffe to plan a romantic getaway to the Seychelles, but their plans are interrupted when Fitz is called to inspect Hive's gel matrix chamber before it's put in storage. On his way out of the lab, he finds Yo-Yo's cross necklace on his chair and puts in his pocket to give to her later. Meanwhile, Mack sees Daisy in her containment unit - breaking protocol to see her without a wall separating them - to tell her they captured Hive. Daisy, still going through "withdrawals" from Hive's sway, takes full responsibility for everything she did under Hive's control, and rejects her partner's attempt to reconnect with her before breaking down in tears. Daisy warns Mack that Hive cannot be contained.

The Playground goes on lockdown while Fitz examines Hive's gel matrix cube. The only part of the base that remains exposed are the hangar doors, which are still unable to fully close since Daisy left to join Hive. Fitz comes to a shocking realization when he sees that the shipping container's label states that the contents were manufactured in "Absolution, Montana". James and Giyera remotely set off a bomb that was placed inside the shipping container from Absolution, Montana. The agent closest to the shipping container, O'Brien, is caught in the pathogen and is transformed into one of the primitives. He grabs another agent and drags him into the mist. More agents come to Fitz' aide, but the lockdown procedure leaves them trapped in the hangar with the mist, ensuring their eventual transformation into primitives if they cannot get out. Simmons is able to briefly override the lockdown at the last moment, replicating an engineering sequence that she and Fitz refer to as "Professor Vaughn's Third Year Compiler Theory", allowing Fitz and one other agent to escape the hangar unharmed.

From her containment unit, Daisy and Mack watched as the primitives pound on the gel matrix cube to free Hive from his prison. Daisy tells Mack that Hive knows everything about the Zephyr's capabilities, and will use it to fly high enough to disperse the pathogen. While Mack hurries out of the containment unit to share this information with Coulson, Daisy decides to hack into the module to let her in and raise herself onto the Zephyr to face Hive. Instead of fighting him, she begs Hive to take her back into his sway. Hive tries to infest her with his parasites, but whatever Lash did to her to free her of the parasites the first time has made her impervious to them. Daisy, enraged at being denied her place with Hive, lashes out at him, sending a powerful shockwave directly at him.

Retrieved from "https://marvel.fandom.com/wiki/Marvel%27s_Agents_of_S.H.I.E.L.D._Season_3_21?oldid=5505989"
Community content is available under CC-BY-SA unless otherwise noted.