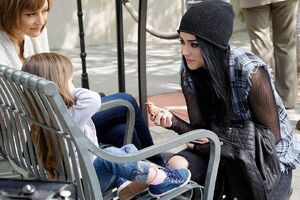 I only wanted to make it better... to feel a connection. But you must feel that already. To sacrifice for them, with all their flaws.

The team prepares to stop Hive from taking off in the Zephyr, but the multitude of S.H.I.E.L.D. agents transformed into primitive Inhumans stand between them and the hangar. They split up when Mack realizes the primitives are crawling through the Playground's vents. Mack and Elena try to lock down the armory, but the primitives get there first. Elena uses her powers to save Mack when one of the primitives opens fire at him, but one of the bullets hits her side. Mack carries Elena to the room where Coulson, Lincoln, and Dr. Radcliffe have barricaded themselves. With Elena's injury getting worse, the team is left with no other option than to cauterize the wound with a blowtorch. Elena insists Mack be the one to do it.

Meanwhile, Daisy fights Hive in the hangar, enraged that the ancient Inhuman cannot bring her back under his sway. Daisy uses the full force of her powers against him, but Hive's unique phsyiology makes him able to withstand all of her attacks. James and Giyera flying into the hangar in their quinjet distracts Daisy, giving Hive the opening he needs to knock her out with a blow to the head. Hive and the primitives join the other Inhumans on the Zephyr, and Daisy is dragged into the containment module to hold her captive. They take off in the Zephyr with Hive using Grant Ward and Will Daniels' memories to pilot it to the altitude where he'll disperse the pathogen. Unknown to them, however, May and Fitz stowed away under the containment module. Back on the ground, Simmons realizes the primitives' weak vision is affected by extreme heat when she hides from them by a furnace. She turns up the heat in the Playground to over 100°, effectively blinding the primitives and giving the rest of the team the opening they need to regroup in Coulson's office. Coulson calls in a quinjet to evacuate them from the facility and get Elena the medical attention she needs. He orders the rest of the team to stay with her, but once they're safe he alone will take the quinjet to board the Zephyr and stop Hive.

Fitz and May come out of the floor, and after fighting off a couple primitives they talk to Daisy about what happened between her and Hive. May's speech about how she shouldn't give up is interrupted when she's knocked out by a flying object. Giyera snuck up behind them and holds a gun aimed at them. Fitz pleads for him not to shoot, pretending that he planted a weapon on board the Zephyr specifically designed to kill him and reminding Giyera that they don't want to kill any of the Inhumans under Hive's sway. Giyera buys Fitz's bluff and lowers the gun, allowing Fitz to shoot him multiple times with a camouflaged gun. The two agents join Daisy in the module when Ma comes to. Since the Zephyr isn't optimized to handle such high altitudes, the temperature on the plane drops dramatically. Fitz gives Daisy her coat, but when she finds Elena's cross in its pocket, she knows that the vision Charlie Hinton gave her is closer to coming true.

Hive personally investigates Coulson's quinjet when it docks on top of the Zephyr. The director of S.H.I.E.L.D. and the ancient Inhuman exchange words, leading to Hive showing Coulson his true face and threatening to steal his body. Once he's using Coulson as a host, Hive will make everyone believe Coulson defeated him and will slowly turn his agents to his cause. Coulson then reveals this was all a distraction; Hive has really been talking to a hologram while the real Coulson, Simmons, Lincoln and Mack infiltrate the plane. They make their way towards the cargo bay to regroup with May, Fitz and Daisy. Lincoln fights James when he stands in their way. Although Lincoln gets the better of him, James uses his powers on Lincoln's clothes, causing them to explode and leave a deep wound in his side. Now that the team is back together, Coulson shares his plan with them all. they'll move the warhead to the quinjet, and then have the quinjet disembark from the Zephyr and head straight into outer space where the pathogen can be released without causing any harm. Daisy leaves them to move the warhead before they can decide who should do that and which of them should stay behind and fight Hive and the primitives.

Coulson, Mack, May and FitzSimmons are too busy fighting the primitives to notice Hive went after Daisy directly. He corners her on the quinjet and tries to convince her to back down, but Lincoln appears in the pilots chair to take command. He blasts Daisy back onto the Zephyr with a bolt of electricity, leaving himself, Hive and the warhead on the quinjet. Daisy rushes to the plane's communications room to get in contact with Lincoln. He tells her that this was his purpose, as his powers made him the only person who could fry the quinjet's manual controls. Daisy feels for Yo-Yo's necklace, the sign she believes meant it was her destiny to sacrifice herself, but realizes Lincoln must have grabbed it in the cargo hold. The quinjet gets far enough into space to lose contact with the Zephyr. Daisy begs Coulson to help her and save Lincoln, but Fitz puts it to her bluntly - the quinjet is not designed to navigate in outer space. On the quinjet, Hive accepts his fate, and calmly floats in Zero-G next to Lincoln as they look at the Earth and await the explosion. In his final moments, Hive admits that he's envious of Lincoln, that he could connect with people despite their flaws. From the Zephyr, the rest of the team watches on as the quinjet explodes.

Six months later, Coulson and Mack believe they might have finally caught up with Daisy, who has since left S.H.I.E.L.D. and is now a vigilante dubbed "Quake." Coulson sits at the a window waiting for Daisy to approach Charlie Hinton's family. Charlie's wife thanks Daisy for all she's done for them, for all the money and helping them relocate, and Daisy gives Charlie's daughter the wooden bird he carved for her. Coulson sees the bird and calls in a team to apprehend her. Daisy tells the Hintons about a friend she has nearby who she wants them to meet before leaving them. S.H.I.E.L.D. vans swarm the area, but it's too late to catch her. Daisy's gone into an alleyway, and uses her powers to propel herself into the sky. Coulson realizes they've lost her again, and orders Mack to call "the Director" about their progress. Meanwhile, Dr. Radcliffe returns home after the final day of hearings. He asks his A.I., A.I.D.A., if Fitz has arrived, but Fitz had to turn down his invitation because he was planning something special for Simmons. Dr. Radcliffe opens an old bottle of Scotch regardless to celebrate. A.I.D.A. asks if this is to celebrate his name being cleared or Fitz joining his L.M.D. project, but Dr. Radcliffe says it's neither. Instead, they're celebrating A.I.D.A.'s "birthday," as Dr. Radcliffe shows the A.I. a synthetic human body.

Retrieved from "https://marvel.fandom.com/wiki/Marvel%27s_Agents_of_S.H.I.E.L.D._Season_3_22?oldid=5598983"
Community content is available under CC-BY-SA unless otherwise noted.