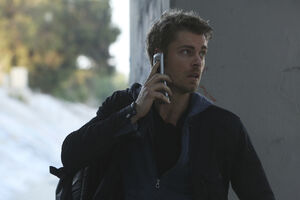 Everything they're saying about me is true.

Appearing in "A Wanted (Inhu)man"

Synopsis for "A Wanted (Inhu)man"

Lincoln narrowly evades capture by the ATCU. Rosalind Price has Lincoln's information shared with every possible authority - from the CIA to local law enforcement - to create a nationwide manhunt for him. Using the information from a tracker Mack put on him at the hospital, Daisy calls the burner phone he recently bought from a convenience store. Lincoln, however, freaks out over S.H.I.E.L.D. tracking him, and fries both the phone and the tracker in his arm. He tries riding the bus to get away, but the television on the bus shows his picture. Lincoln uses his powers to stop the bus and terrify the passengers when an army private riding the bus confronts him. Out of other options, Lincoln calls a man from his past to help him. The man, John, has so far remained ignorant of Lincoln's predicament, so he allows Lincoln to stay at his apartment for a while and gives him his car. Lincoln rests on his couch, but by the time he wakes up John has seen a report on him and has contacted the ATCU. John threatens him with a bat to prevent him from leaving, so Lincoln uses his powers to shoot the bat out of his hand. The shock sends John into cardiac arrest. Lincoln tries and fails to resuscitate him with his powers.

Coulson has arranged a meeting with Rosalind Price. Before he leaves, Coulson authorizes Daisy and Mack go to Chicago to help Lincoln after they receive a call from him. Coulson tries to talk Rosalind out of hunting Inhumans and to let S.H.I.E.L.D. have Lincoln, pointing out that acting out in the open like with her manhunt for Lincoln only puts more people in danger. Rosalind, however, reveals to him that she has a picture of Daisy captured on the hospital's security cameras. Meanwhile, Daisy and Mack find a grief-stricken Lincoln in an empty apartment. Daisy goes in to talk to him while Mack keeps watch from outside. The ACTU has the entire place surrounded. Lincoln thinks he's just as bad as the ACTU makes him out to be since he killed his only friend. Daisy tries to calm him down, and, after they kiss, Lincoln agrees to work with her, not S.H.I.E.L.D. This moment is short-lived, as Mack soon comes into the apartment with a squad of ATCU agents saying Coulson ordered him to hand Lincoln over to them. Lincoln, however, electrifies the floor, knocking the ATCU agents onto their back, and escapes. With Lincoln again on the run, Price orders her men to capture Daisy, but Coulson trades something even bigger than her in exchange for her freedom - himself. Coulson decides that it's better to work with these people than to butt heads with them, and agrees to help them in their search for Inhumans.

Meanwhile, Hunter and May are still on Ward's trail. Hunter thinks their key to finding him is Spud, an arms trafficker affiliated with Hydra's UK branch currently residing in Massachusetts. They approach him in a bar and after getting him drunk find out the only way to meet Ward is to be the last man standing in an underground fight club. May wants to fight, but Hunter reminds her that word of a small Asian woman tearing apart potential Hydra recruits would make its way to Ward and blow their cover. Hunter fights instead while May watches from the side. Much to his surprise, Hunter's opponent is Spud. The two start beating each other into a bloody pulp. May, meanwhile, is harassed by three thugs watching the fight. They drag her to a back room, but she easily beats them up. May goes back out into the main room just in time to see Hunter (accidentally) kill Spud. The fight's referee takes Hunter to Kebo, who promises Hunter he'll see his boss soon.

Simmons meanwhile has been trying to adjust to normal life. Fitz says that every system in her body is "out of whack" from spending months on an alien planet. He escorts Simmons around her lab - which he left in the exact condition she left it in - to try and acclimate her to Earth's gravity. However, Simmons is easily distracted by another scientist conducting an experiment, an affect of being hunted by something on that other world. That night, Fitz takes Simmons to a restaurant he fully reserved for months waiting for her to come back. Although Fitz just wants to have a normal time, Simmons breaks down crying over all that's happened to her. Some time later, Bobbi finds Simmons alone in her lab working on the pieces of the monolith. Simmons says she has to go back.

Retrieved from "https://marvel.fandom.com/wiki/Marvel%27s_Agents_of_S.H.I.E.L.D._Season_3_3?oldid=5066805"
Community content is available under CC-BY-SA unless otherwise noted.