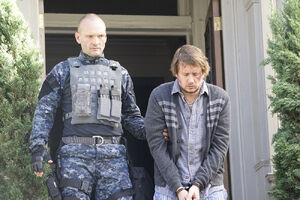 Appearing in "Devils You Know"

Synopsis for "Devils You Know"

S.H.I.E.L.D. tries to recruit two Inhumans who left Afterlife with Alisha's help, but the monster that's been killing Inhumans bursts into their apartment and kills the couple. Alisha, who is still on the plane with Coulson, feels her duplicate's death and goes into shock. Coulson orders Mack and Daisy go in after the killer, but he's already gone. They hurry after him while Coulson, Bobbi and Fitz calm down their neighbors and investigate the scene. Although the killer is already gone, Daisy and Mack come face to face with the ATCU, but Rosalind prevents this from escalating into a shoot-out.

From some of his hairs left at the scene, Bobbi discovers the killer is himself an Inhuman. Daisy, meanwhile, discovers the killer has been tracking his victims using a virus embedded in an email. While Dr. Garner talks to Coulson about Alisha, his newest patient, May arrives back at the Playground. She's let Hunter go on his own for the time being to get inside Ward's base, and will let her know when it's time to strike. With the information she brings him, Coulson decides it's time they put an end to Ward and Hydra. But first, Daisy's found tracked the virus to Dwight Frye, a former I.T. guy living in Baltimore who Daisy suspects might have been the killer before he changed.

Coulson, Daisy and Mack meet with the ATCU outside of Frye's building. They go in together expecting a fight, but Daisy finds him cowering in a closet. He tries to force her out, but Daisy uses her powers to throw him back into the closet. S.H.I.E.L.D. and the ATCU surround him, and they realize Daisy is what's setting him off. The other agents leave Coulson and Rosalind alone with him. Frye reveals that ever since he's changed, being in the presence of other Inhumans gives him migraines and other painful symptoms. Lash, the Inhuman killer, contacted Dwight with a list of other Inhumans tortured by their powers, and told him that if he could find them for him he would put them out of their misery.

The ATCU takes Dwight into their custody. Coulson wants Mack to go with them and check out the ATCU's facilities, but Daisy insists she goes with them as well. Coulson asks Rosalind to let them go with her, and after talking with Banks she agrees. While en route to the ATCU's base, Lash attacks the transport. He cuts his way into the trailer and takes out the ATCU's guards. Daisy tries to stop him with her powers, but it causes the truck to over. Lash drags Dwight from the wreck. Frightened, Frye begs for his life, telling the monster that he only told them the truth about him, and that he's merciful. Lash responds that he isn't merciful but necessary, and kills Frye. Daisy and Mack, meanwhile, are pinned down in the wreck, and Daisy sees Lash's shadow take the shape of a human as he leaves. Daisy later tells Mack what she saw while they recover in the ATCU's hospital.

Meanwhile, Hunter gets closer to Ward. Kebo and another Hydra thug pick him up to see Ward, who's now calling himself "the Director," but Hunter has to ride in the trunk of the car the whole way. When they arrive at their base, Hunter finds out that Ward is styling his new Hydra after S.H.I.E.L.D. When he questions this, Kebo says he can ask the director himself, as Ward is standing right behind him. Hunter grabs a nearby machine gun and reveals himself. Ward is disappointed that only Hunter and especially not Bobbi would go after him when his men tell him there are no S.H.I.E.L.D. reinforcements surrounding them. Hunter is surrounded by Hydra agents, but Agent May intervenes.

Just as they pin Ward down in his office, Ward throws a phone between them. The phone shows a live video feed of Dr. Garner. Ward warns them that his men will kill him soon, but Ward promises them that he'll call them off if they put their weapons down and leave. Werner and a team of Hydra thugs, meanwhile, surrounds Dr. Garner in a convenience store. Hunter calls Ward's bluff, and opens fire into the office. Kebo smashes a window and he and Ward escape in the back of a truck, but as Ward leaped through the window one of Hunter's bullets hits his back. May, worried for her ex-husband's safety, calls Andrew, but gets no response. Back at the convenience store, Dr. Garner's phone is on the ground near an unidentifiable dead body. Gasoline has spilled all over the store's floor. Werner ignites the gas and runs out of the store just before the explosion. Something, however, has Werner terrified.

Back at the Playground, Fitz has found out about Simmons' research on the Monolith. Later, Fitz confronts her about her research, but Simmons tells him she needs his help to get her back to wherever the Monolith took her. Something happened to her over there, and she's ready to tell Fitz about her ordeal.

Like this? Let us know!
Retrieved from "https://marvel.fandom.com/wiki/Marvel%27s_Agents_of_S.H.I.E.L.D._Season_3_4?oldid=6498170"
Community content is available under CC-BY-SA unless otherwise noted.