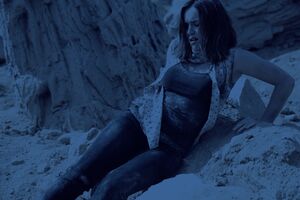 It's evil. This whole godforsaken planet is evil!

Right after Fitz asks her to dinner, Jemma Simmons is swallowed by the Kree monolith and transported to another world. The only connection she has to home is her phone and the picture of Fitz and video of the team on it. She takes not of her surroundings while she waits for S.H.I.E.L.D. to find and extract her. The world lacks any signs of water or life, and, much to Simmons' frustration, seems to be in perpetual night. After waiting for over three days, she realizes she needs to find some food or water. She finds a pool of water a day later. Simmons takes a drink and breaks down in hysterics. While swimming in it a few hours later, Simmons is pulled under the water by some plant-like tentacle. She breaks free of the tentacle to eat for the first time in days. Three weeks later, she goes back in the water and fights it again. After spending a month on the other world, Simmons investigates a ratting noise she hears not far away. She goes into a cluster of reeds, but the ground below her gives and she falls into a cave. As she passes out, she sees the hole being covered.

Simmons wakes up and finds herself in a makeshift cage. Her captor is a man who can speak English. After spending a few days in the cage, Simmons pretends she is sick to trick him into the cage, and then hits him over the head with her metal plate to escape. Simmons runs up out of the cave with the man close behind. She trips and cuts her legs, allowing the man to catch up to her. Rather than kill her, he looks to her wound, warning her that "it" can smell blood. Before he can explain what "it" is, he sees a sandstorm in the distance and they hurry back to the cave. He says "it" can affect on the whole planet, and that "it" and the whole planet is evil. He introduces himself as Will Daniels, and reveals he's been trapped on the planet since 2001. Fourteen years ago, Will was an astronaut sent through the portal with a team of three scientists as part of a NASA to the alien world. The entity on the planet slowly drove the three scientists insane, and now Will is the only survivor.

Simmons and Will work together to find a way off the planet. Will drew a map of the surrounding area, with certain areas marked as "no-fly zones," or places where the entity was most active. Simmons eventually wants to go into a no-fly zone to look for clues off the planet. Will tries to stop her, but she leaves anyway. Once she's in the no-fly zone, Simmons sees and old saber sticking out of the sand and goes over to it. She finds the remains of people who were brought here in the past, including an astrolabe. However, it isn't long before Simmons is trapped in a sandstorm. While she tries to get away, she sees the entity within. Simmons barely makes it back to the cave in time. But with what she's found, Simmons now has a plan to get them home.

Simmons comes to the conclusion that the portal appears in a fixed place that happens to look like its moving due to the planet's rotation, and that the portal activates based on the alignment of the planet's two moons. She uses an astrolabe and Will's computer (which she powers with her phone's battery) to find locations where the portal will appear, but only manages to get one before her battery runs out of power. Will agrees to Simmons' plan even though the portal will appear across a canyon in a no-fly zone. After four months on the other world, Simmons' is finally ready to return home. While on the way to the portal, Will says one of the NASA scientists said the world might have been a lush paradise before the entity arrived and consumed the planet. When they arrive at the canyon, they find it's much larger than it once was, and there's no way for them to get across in time. Will instead tries to launch a message Simmons wrote for Fitz through the portal using a grappling hook launcher, but the portal closes before it can get through. They go back to the cave defeated. Simmons breaks down and gives up on ever going home, but Will reminds her that she's given him hope, too, and they kiss.

Two months later, Will and Simmons try to get through the portal again. While sharing an old bottle of wine while waiting for the portal to open, Simmons sees a flare in the distance. Realizing it must be Fitz, she hurries towards it, but she and Will are stopped by a sandstorm. The entity tricks Simmons by taking the shape of an astronaut in the storm. Will breaks Simmons out of the entity's hold and tells her to run. Soon after, Simmons hears Fitz' voice, and makes it back home.

In the present day, Simmons finishes telling Fitz about her ordeal on the other world. He has nothing to say to her, but only storms out of the room. Simmons follows him to the lab, where he brings up his research on the monolith. The two of them are going to get Will back.

Meanwhile, on the other world, Will enjoys a brief moment of sunshine before going back into the shadows.

Retrieved from "https://marvel.fandom.com/wiki/Marvel%27s_Agents_of_S.H.I.E.L.D._Season_3_5?oldid=5505968"
Community content is available under CC-BY-SA unless otherwise noted.