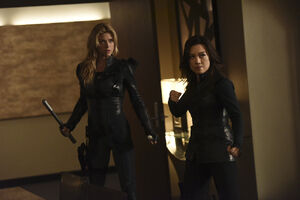 Episode Title
"Among Us Hide..."

Appearing in "Among Us Hide..."

Synopsis for "Among Us Hide..."

A team of S.H.I.E.L.D agents wheel a badly wounded Dr. Garner into the Playground on a gurney. He tells Agent May that Coulson had a man following him who saved him from Ward's Hydra thugs. Hunter tries to apologize to her over what happened to her ex-husband, but she only assaults him, blaming Hunter for his injuries. Coulson takes Hunter off the hunt for Ward, and May volunteers to take his place. May brings Bobbi onto her mission after testing her to see if she's physically up for it. S.H.I.E.L.D. finds out one of Dr. Garner's assailants was Werner von Strucker, one of his students under the name "Alexander Braun," and uses his bank accounts to try and follow him. Meanwhile, Werner is hiding in Lisbon with Gideon Malick, an old associate of his father's. Malick makes contact with Ward, scolding him for playing a "weak game" and referring to Werner as a pawn who wasn't ready to be played. He gives up Werner's location to Ward, sacrificing a player to save the game.

Meanwhile, Daisy reveals to Coulson that she saw Lash take a human form. She thinks he might be someone within the ATCU, using the organization's resources to find and kill Inhumans before anyone else can get to them. She and Mack come to the conclusion that Lash might be Rosalind's lieutenant, Banks, because he was not with them on the transport when Lash killed Dwight Frye. Hunter joins them in their hunt for Banks while Coulson meets with Rosalind to take a look at the ATCU's facilities. However, Rosalind tries to keep Coulson away from the facilities by staging a break-in at her home. Coulson easily sees through her ruse, and she begrudgingly takes him to see what the ATCU is doing with the Inhumans in their custody. Meanwhile, Daisy, Mack and Hunter have found Banks. Hunter, however, proves to be something of a liability, as he takes out Banks with an I.C.E.R. and brings him back to their surveillance van. He suggests they take a sample of Banks' blood to test it for the Inhuman marker, and punches him the nose to get a sample. The team also finds out that he was supposed to arrive at Endotex Labs. They leave Banks behind and go investigate the lab, finding the ATCU's Inhuman holding facilities inside. The ATCU is keeping them in a small cage and storing them away, and the team is shocked to see Coulson there, seemingly unconcerned about the ATCU's treatment of the Inhumans. Coulson, however, has gotten a secret out of Rosalind - that her husband died years earlier of cancer. She's putting the Inhumans to sleep until someone can develop a cure for their condition, like she wanted to do with her husband.

Fitz tracks Werner von Strucker to Lisbon after May and Bobbi found a number of his passports in a bank in the Cayman Islands. The two agents break into Werner's penthouse, only to find him badly beaten by Kebo and a number of Ward's men. Kebo stabs Werner in the stomach before running out of the penthouse. Bobbi follows him while May takes on the other Hydra thugs in the room. Bobbi builds her confidence before taking on the Hydra goons outside the penthouse, and fights Kebo in the pool. Although Kebo seems to have the upper hand, Bobbi seemingly kills him by getting out of the pool and sticking her electrofied battle staves into the water while Kebo was still in the pool. Meanwhile, May unties Werner, and in his dying breaths reveals that Andrew turned into some monster when he tried to kill him. Lash's true identity is none other than Dr. Garner.

Back at the Playground, Daisy gets a call from Lincoln, who is still on the run from the ATCU. After finishing her call, Dr. Garner asks her if she knows where Lincoln is...

Retrieved from "https://marvel.fandom.com/wiki/Marvel%27s_Agents_of_S.H.I.E.L.D._Season_3_6?oldid=5505969"
Community content is available under CC-BY-SA unless otherwise noted.