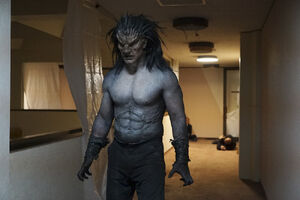 Mankind's scary enough as it is. Some psycho gets a gun and watch out. But now, people are their own weapons.

Six months ago, Andrew comes back home from his vacation in Hawaii with his ex-wife. S.H.I.E.L.D. has already moved many of Jiaying's materials to his house for him to look over. When he opens one of Jiaying's books, he accidentally releases Terrigen mists trapped between the pages. Dr. Garner breathes in the mists, and he undergoes Terrigenesis.

In the present day, Coulson lets Daisy know that he's going to a meeting of world leaders in Colorado with Rosalind Price. The international community has taken notice of the increased number of Enhanced people, and Coulson is going to speak on behalf of the ATCU as a consultant. Meanwhile, Agents May and Morse make their way back at the Playground from their mission in Portugal. May can't get Werner von Strucker's final words out of her head. Once she's at the Playground, May looks into her ex-husband's flight records, and finds that he's been close to five Inhuman deaths. Daisy tells her he's currently evaluating Joey at a S.H.I.E.L.D. training facility, the Cocoon. Agent May goes to the Cocoon and interrupts their session. She confronts Andrew with his secret after two S.H.I.E.L.D. agents move Joey. Andrew goes into a rage when she reveals what von Strucker told her. He reaches his boiling point, and shoots Agent May with an ICER.

Coulson and Daisy pick up Rosalind and the ATCU on their way to Colorado. Daisy gives her the tour of S.H.I.E.L.D.'s Inhuman-containing facilities aboard the Zephyr One. When she shows her their containment unit, Daisy confronts Rosalind on the ATCU's policy towards Inhumans. When Daisy asks if she's afraid of Inhumans, Rosalind says she absolutely is; that people who are their own weapons are inherently dangerous, and that for every Daisy Johnson there's a Lash. Soon afterwards, Mack arrives on the plane with Lincoln, who reveals that he knows Lash is inside S.H.I.E.L.D. He recognized Lash's targets follow from Jiaying's genealogical record of Inhumans, and Mack knows the only person who had access to that record is Dr. Garner. Lincoln also says that Dr. Garner is still undergoing his transformation, and will eventually only be Lash. Coulson calls off his meeting with the President to apprehend Andrew.

Meanwhile, Andrew has May chained up in an abandoned administrative building at Culver University. When she comes to, he tells her what happened to him, and says Lash instinctively takes over. He has a "craving" that can only be sated by killing other Inhumans. May shows some sympathy towards him, but as they kiss Coulson interrupts them. He tries to have Dr. Garner peacefully surrender, but places Daisy, Mack, Lincoln, and Rosalind's men throughout the building to be ready to stop him. Andrew, however, he has a moral obligation to kill the Inhumans who deserve to die by being unworthy of their powers. As Andrew nears his limit, Lincoln goes off-script and attacks him. Andrew turns into Lash, and he chases Lincoln throughout the building's hallways. Mack distracts Lash away from Lincoln, only to himself be saved by the ATCU. Lash tears through Rosalind's men, but Rosalind herself fires on him. Lash grabs her by the neck and throws her through an empty window. Fortunately for her, Daisy is on the ground and uses her powers to slow Rosalind's fall. Lincoln draws Lash closer to the plane. As they fight, Agent May intervenes and tries to calm down her ex-husband. Lash turns back into Andrew, but May betrays him and shoots him, sending him flying into the containment unit. When Coulson asks May how she knew that wouldn't kill him, she says she didn't. Rosalind offers May to put Andrew in stasis to slow his transformation. She asks Daisy for advice, and when she says it could be a temporary solution, May takes Rosalind's offer.

Back at the Playground, Fitz has been looking for a way back through the portal. He fixes the SIM card in Simmons' phone, and notices the logo of the organization that sent Will through the portal looks a lot like one of the symbols on the English castle were they destroyed the Monolith. Later, Fitz asks Simmons if she was delirious at all when she recorded those videos on her phone, but she says her mind was as clear as ever. Rather than keep asking questions, the two of them just watch the sunrise.

Meanwhile, Grant Ward meets with Gideon Malick. Ward tells him about his plan to cut off the head of S.H.I.E.L.D. - that without Coulson, S.H.I.E.L.D. falls apart. Malick excuses himself to take a call. After spending the night with Coulson, Rosalind Price apologizes to Malick for missing their meeting in Colorado.

Retrieved from "https://marvel.fandom.com/wiki/Marvel%27s_Agents_of_S.H.I.E.L.D._Season_3_7?oldid=5258379"
Community content is available under CC-BY-SA unless otherwise noted.