"Many Heads, One Tale" 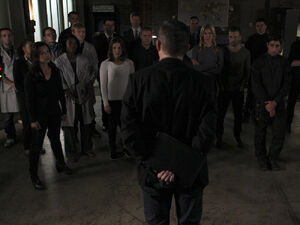 Episode Title
"Many Heads, One Tale"

You're a smart predator...but you don't live on top of the food chain.

Appearing in "Many Heads, One Tale"

Synopsis for "Many Heads, One Tale"

Gideon Malick scolds Ward for going after Werner von Strucker while chasing down the Strucker family vault, something Malick says doesn't exist. Ward, however, sees through Malick's lies as his sacrifice of the last remaining Strucker heir gives him control over the vault. Malick leaves their dinner with Giyera, ominously telling Ward that while he's a strong predator, he's far from the food chain. After Malick and Giyera leave, more of Malick's men come in and try and kill Ward. Ward fights them off, killing one of them in the process. He tortures the remaining three into giving up any information on the Strucker vault.

The team returns to the Playground after handing Dr. Garner and his containment module over to the ATCU. Fitz tells Simmons that he thinks the ram's head symbol on the castle wall is connected to the organization that sent Will through the portal. Mack, meanwhile, confronts Coulson over his relationship with Rosalind Price. He thinks the director's relationship with the head of the ATCU compromises his ability to lead. Coulson tells him that he still doesn't fully trust Rosalind despite liking her. Shortly thereafter, Coulson gathers his agents and announces the launch of Operation Spotlight, with the objective of looking into every dark corner of the ATCU. Coulson has Bobbi and Hunter go in on the ground, Daisy and Mack provide support from Zephyr One, and May and Lincoln (who she hand-chose to assist her) are on extraction. Meanwhile, Coulson will personally give Rosalind a tour of the Playground.

Andrew's pod sends out a powerful, encrypted homing signal that disrupts the ATCU's computer network. Steve Wilson, the head of the ATCU's I.T. department calls the FBI, but instead gets Mack posing as an agent. He tells the ATCU that their IP has been traced to attacks on multiple agencies, and that he's already sent a team to look into their servers and fix them. Bobbi and Hunter enter the ATCU's headquarters disguised as the FBI agents. Hunter keeps the ATCU busy while Bobbi looks for Andrew. When she gets into their lab, Bobbi finds neither Andrew nor any sign of research into a cure. Instead, she finds a number of fish oil pills, leading the team to discover the ATCU isn't trying to cure Inhumans, but is instead trying to make them.

Back at the Playground, Simmons discovers the rams' head symbol is associated with human sacrifice, meaning Will's mission was secretly a suicide mission. Fitz continues to work on a way to bring Will back, but Simmons furiously tells him to stop. Fitz confronts her about her feelings for him and Will, and in the heat of the argument they kiss. When end the kiss, Simmons notices something about the rams' head symbol from a book on the floor. Meanwhile, Coulson traps Rosalind in the Playground's safe room, threatening to lock her in until she reveals her connections to Hydra. She swears she has nothing to do with Hydra, but Coulson says the only way she could have only learned about the T.A.H.I.T.I. project from Hydra. When he confronts her with what Bobbi found in the lab, she says no one should have access to that floor except for Gideon Malick, Hydra's science advisor and liason with the President. Meanwhile, Malick questions Andrew at an unknown place, asking him if he wants to be "cured" of his Inhuman gift.

At this point, the ATCU realizes something is wrong with the FBI agents. Wilson and Banks confronts Hunter, the latter of which recognizes him. Hunter runs through the building towards Bobbi, while Daisy changes the passcodes on the doors to keep Banks away. Bobbi, however, has to fight off ATCU agents of her own. The two agents find each other, but are confronted by Giyera, who Mack and Daisy discovered is an Inhuman. Giyera uses his Inhuman powers to telekinetically fire guns at Bobbi and Hunter, but they take cover behind a table. Bobbi takes out her special new batons, complete with a system that magnetically brings them back to her. She uses them to take out the ATCU agents flanking Giyera, but the Inhuman himself is harder to take down. The two of them fight, and Giyera uses his powers to control Bobbi's battle staves. Before he can use them on her, Hunter sneaks up behind him and hits Giyera in the head to knock him out. Banks, who has since received word from Rosalind about Hydra, escorts them out of the facility for May and Lincoln to extract them.

The team regroups at the Playground. Rosalind reveals everything she knows about Malick to them, while Coulson, using the evidence from FitzSimmons, reveals the organization with NASA that sent Will through the portal was Hydra. Meanwhile, Ward breaks into the Strucker vault in Germany to find Malick inside. Malick, impressed that Ward could both survive his men and find the vault, tells Ward the true story of Hydra's origins. He says Hydra goes back thousands of years, to when an Inhuman was born who was destined to the rule the world. He unveils a piece of the Kree monolith, and says the people were so afraid of the Inhuman's powers they exiled him to another world. Hydra's true purpose is to prepare the world for his return, and Malick promises Ward that he will rule the world by their side. But first, they need to find out how S.H.I.E.L.D. brought someone back through the portal.

Retrieved from "https://marvel.fandom.com/wiki/Marvel%27s_Agents_of_S.H.I.E.L.D._Season_3_8?oldid=5514543"
Community content is available under CC-BY-SA unless otherwise noted.