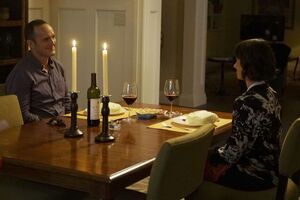 Everything he does is just a twisted attempt to justify his past.

Coulson and Rosalind are finally having burgers together at Rosalind's apartment in D.C. when a bullet comes through the window and hits Rosalind in the neck. After she bleeds out, Coulson receives a call from Grant Ward taunting him over how it feels to watch the woman he loves die in his arms. He tells Coulson he can't stop Malick from opening the portal and ends the call. Coulson gets out of the apartment by the skin of his teeth when Ward's goons barge in.

A grieving, enraged Coulson is taken back to the Playground. After tearing up his office, Coulson questions each of his original agents, trying to get any information out of Ward that he can. Fitz says he used to catch Ward in his bunk oddly looking at a picture of him and his mother, while Daisy says their similar dysfunctional childhoods. Coulson takes his frustrations out on Hunter, who he blames for letting Ward get away. Bobbi talks him down and he accepts his responsibility for choosing to bring Ward on his team in the first place. Coulson comes up with a plan to take Ward down, and takes Hunter and Bobbi with him. Before he leaves, he names Mack the acting director of S.H.I.E.L.D.

Meanwhile, Banks tells S.H.I.E.L.D. everything he knows about Distant Star Pathfinder, and takes FitzSimmons and a team of agents to their abandoned lab. While FitzSimmons argue over the point of bringing Will back, Giyera takes control of Banks' gun and shoots the other agents before turning it on Banks himself. Hydra takes FitzSimmons to the castle in England. Gideon Malick wants Simmons to reveal how she found a way back through the portal. When neither of them say anything, Ward has them separated. He interrogates Fitz while Giyera tortures Simmons. Coulson is again enraged when he hears of FitzSimmons' abduction, but his plans are not changed. He and Hunter stage a robbery at a jewelry store and kidnap one of the employees - Ward's younger brother Thomas.

Coulson uses Rosalind's phone to call Ward and show him they have Thomas hostage. Ward struggles to keep his composure when he sees his brother, and warns Coulson that he shouldn't lay a hand on him. Coulson ends the call, and they start to untie him. Thomas is reasonably frightened, at first thinking they're with his brother. He says he was hiding to keep him safe from Grant, especially after what he did to Christian and their parents. He also says the two of them used to be very close as children up until the day he pushed him down the well. Ward, surprisingly, calls them back, but Coulson hands the phone to Thomas. He talks with his brother long enough for S.H.I.E.L.D. to track the call, leading them to the castle in England where they destroyed the Monolith. Soon afterwards, they drop Thomas off in a city where a team of agents will keep him safe from his brother. Ward realizes what's happened, and tries to get all the information Fitz has to give in a hurry.

Back at the Playground, Mack realizes that Coulson's quinjet will never make it past the anti-air weapons guarding the castle, and mobilizes the team of Inhumans (even if it is just Daisy, Lincoln and Joey) to save them. Meanwhile, Giyera drags Simmons to the room where they will open the portal, but Fitz has already offered to go through to the alien world in her place. Although Ward wants to stay and fight S.H.I.E.L.D., Malick gives him the task of leading the team through the portal to recover Hydra's ancient leader. Malick opens the portal, and his men, Ward and Fitz start going through. Coulson sees this happening from above as Hydra's defenses fire on their quinjet. Realizing his window was closing fast, Coulson dives out of the plane and makes it through the portal right before it closes.

Retrieved from "https://marvel.fandom.com/wiki/Marvel%27s_Agents_of_S.H.I.E.L.D._Season_3_9?oldid=5258382"
Community content is available under CC-BY-SA unless otherwise noted.