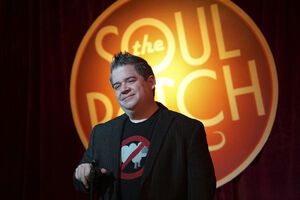 What? You thought they were robots?

A pair of Russian Watchdogs attack Agents Sam and Billy Koenig at an arcade. The fact that there are two identical Koenigs throws them for a bit, but the Watchdog agent Shockley captures Billy. Sam contacts Coulson to let him know the Watchdogs have Billy, and he sends a Quinjet to pick him up and bring him to the Zephyr. The Watchdogs bring Billy to the Superior's submarine and leave him tied up in a room with Dr. Radcliffe, who's pretending to be tied up as well to try and endear himself to the captured agent. They're met by the Superior, a muscular Russian man who prefers to do things "the old way." Radcliffe drops his act when the Superior threatens to torture Billy to get him to reveal the location of the Darkhold since he was promised Koenig wouldn't be harmed. Radcliffe thinks he knows a better way to get inside Billy's head. He hooks Billy up to a sedative scenario (similar to the one the real Agent May is kept in) while Aida maps his brain to gain access to his memories.

Sam Koenig meets with Coulson, Daisy and May (the LMD) aboard the Zephyr. Daisy and Sam look over the security footage to find some clue to the identity of the Russians who attacked him and his brother. Sam is clearly star-struck with "Quake" even though he's known her for years, and awkwardly brings up the "library" of fanfiction online shipping her with Black Widow. Daisy finds out one of the men who attacked them was Leo Babikov, a Russian operative connected to the men who tried to assassinate Director Mace and to the Russian Prime Minister who was attacked by Inhumans. Billy suggests the reason Senator Nadeer, the Watchdogs, and these Russian spies want the Darkhold is to find a way to eradicate Inhumans, much to Coulson's surprise who had no idea Sam knew he entrusted Billy with the book. The team try to get Sam to reveal where his brother hid the Darkhold, but he doesn't know where it is. Billy passed off the Darkhold to him, but Sam then gave it to Agent L.T. Koenig.

The team goes this other Agent Koenig's last known location, a comedy club called The Soul Patch. A man who looks just like Sam and Billy goes onto the stage and starts a bit ripping into S.H.I.E.L.D.. Agent Davis quietly wonders to himself if the Koenigs "come off an assembly line." A woman sneaks up behind and attacks him. Coulson calms everyone down, and introduces the woman to his team as L.T. Koenig. The other guy is her brother Thurston, who she calls "an idiot." After a brief Koenig family reunion on board the Zephyr, L.T. revals she doesn't know where the Darkhold is, either, because she handed it back to Billy as part of Operation: Hot Potato. Billy must have left it at the Labyrinth, a secret S.H.I.E.L.D. facility the location of which is only known to the Koenigs. Daisy also discovers the Russian spies who attacked the Koenigs and Director Mace all work for Anton Ivanov, a Russian industrialist who collects military antiques, including a submarine. At this same time, Dr. Radcliffe's machine finds Billy's memories of hiding the Darkhold in the Labyrinth. The Superior - Ivanov - questions Radcliffe's findings and wants to tortue Billy so he can give up the same information and verify them. Aida prevents Ivanov and his men from getting to Billy. Ivanov thinks she's an Inhuman due to her incredible strength, but Radcliffe corrects him - she's a machine.

At the Playground, Mack and FitzSimmons are working to figure out the Radcliffe LMD's secrets. Fitz is completely unable to decipher the real Dr. Radcliffe's code, instead accidentally causing the LMD to literally sing like a bird. The LMD notices Fitz's frustration with the work (and from Dr. Radcliffe's betrayal), and brings up Fitz's father. The LMD reveals "he" knew his father as they were coworkers. He also knows Fitz's relationship with his father is a sore spot for him, and Fitz turns off the LMD and storms out of the lab in disgust. Simmons goes to talk with about what happened. Something she says gives him an epiphany about the LMD's programming. He stops Mack from destroying the LMD and gets to work removing its skull cap. Underneath, Fitz finds a brain completely made of light that functions like an organic one. The LMD admits it was Aida who designed the brains. Simmons realizes Radcliffe had already mapped another brain - May's.

Both S.H.I.E.L.D. and the Watchdogs hurry to the Labyrinth to get to the Darkhold before the other. S.H.I.E.L.D. gets there first, and while they wait for Sam to grab the book, "May" and Coulson get closer and kiss. L.T. warns them that the a team of heavily-armed Watchdogs with Billy have arrived for the book. Sam hands the book to May and goes with his sister. Coulson asks May to give him the Darkhold instead, but May refuses to hand it over and pulls a gun on him. Coulson realizes this May is actually an LMD Radcliffe programmed to get the Darkhold for him. Coulson demans she reveal where he's keeping the real Melinda May, but she insists she is the real May. Daisy, who got word from FitzSimmons about May being an LMD, uses her powers to knock the LMD down and destroy her legs. They grab the Darkhold and make a run for it, but are stopped by Shockley and the Watchdogs. Coulson trades the book for the captured Agent Koenig, but once Billy is free Daisy uses her powers to knock the book back over to S.H.I.E.L.D.. While the others fight the Watchdogs, Billy grabs the Darkhold and makes a run for the exit. He finds the disabled May LMD, and thinking she's the real Agent May tries to help her. The LMD knocks him out and grabs the Darkhold. Dr. Radcliffe comes in from the side and takes the book from his creation. She begs him to take her with him, but he leaves her there.

A defeated S.H.I.E.L.D. returns to the Playground. Coulson looks on the bright side, noting that they now know the identity of the man who is possibly funding Nadeer and the Watchdogs. The Koenigs are mostly impressed Radcliffe managed to build a fully-functional LMD since they were technicians in the original program. They destroy the remains of Aida's first model and the Radcliffe LMD, but they keep what's left of the May LMD in case they aren't able to rescue the real Agent May from Radcliffe. Back on the sub, Ivanov reveals to Radcliffe that he obsessed with a person he believes is responsible for all the alien problems on the planet. This man is always there, in the shadows our out of focus, whenever something strange happens, and Shockley says was at the Labyrinth - Phil Coulson.

Like this? Let us know!
Retrieved from "https://marvel.fandom.com/wiki/Marvel%27s_Agents_of_S.H.I.E.L.D._Season_4_12?oldid=6498179"
Community content is available under CC-BY-SA unless otherwise noted.