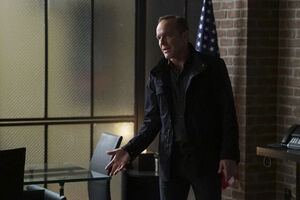 Appearing in "Self Control"

Synopsis for "Self Control"

From her lab on the Superior's submarine, Aida has the captured S.H.I.E.L.D. agents hooked into the Framework and the Superior himself, still badly wounded from his fight with Quake, strapped to an operating table. The Superior begs her not to turn him into a thing like her. Aida promises he will be many things, pulls out a saw, and gets to work cutting him open.

At the Playground, FitzSimmons remain stunned in light of the revelation that Coulson, Mack, Daisy and Director Mace have all been replaced with LMDs. They come up with a story to get away from the LMDs long enough to figure out a plan. However, another LMD detector identifies one of them as an LMD. Simmons holds Fitz at gunpoint, believing him to be an impostor. Fitz begs her to believe he is the real Leo Fitz. Simmons forces him to cut his wrists to prove he isn't an LMD. The pain and loss of blood forces Fitz to the ground. When she tries to get a closer look at his wound, Fitz effortlessly stabs her in the leg and knocks her out with a can of paint. When she comes to, the Fitz LMD has her strapped to a device to scan her brain so she can enter the Framework and be replaced with an LMD. Simmons crawls away from the scan towards a hammer she can use to defend herself. The Fitz LMD begs her not to fight, and that they can live the perfect, married life together in the Framework. Simmons hits a lever with the hammer, sending heavy machinery falling down onto the Fitz LMD. Simmons grabs a knife and stabs the LMD repeatedly, eventually hitting a spot in its neck that disables the machine entirely.

Meanwhile, Aida wakes Dr. Radcliffe out of the Framework. She informs him that four S.H.I.E.L.D. agents have been replaced with LMDs, and that Jemma Simmons and Daisy Johnson will soon have their brains scanned so they can join them in the Framework. Later, Aida shows Dr. Radcliffe the LMD she's building of the Superior. She also confesses that her observations of human nature makes it hard to find a logic to it, and has created a paradox in her programming. Her main objectives are to protect the Framework and preserve Dr. Radcliffe's life above all others, but she reasons Radcliffe is the greatest threat to the Framework as he could some day change her programming to dismantle the Framework should he come to regret building it. Radcliffe thinks this is absurd - why would he ever regret saving these people? Even if their physical bodies give out, they can continue to live on within the Framework. Unfortunately, this answer fixes the paradox for Aida by giving her a way to solve both problems at once. She slits Radcliffe's wrists and forces him back into the Framework. He will be trapped inside the simulation once he has no physical body to return to.

Back at the Playground, the Mace, Coulson, and Mack LMDs prepare for the Inhumans to come to them. Once Daisy meets them, the plan is for them to be killed on sight. Daisy, however, accidentally finds the the multiple, inactive LMDs in her likeness that are supposed to do in the containment room. The Mack LMD checks on the Daisy LMDs after learning from another agent that Daisy was going to be near the containment room. The Mack LMD combs through the Daisy LMDs to see if she's hiding among them. He notices something off with one of them, a distraction set up by the real Daisy so she can push him back with her powers, grab his shotgun-axe and run away. She grabs a tablet and watches the security feed of Coulson, Mace and a few other agents finding Fitz' corpse, not realizing it is only an LMD. The other agents find the circuitry under the LMD's wounds. Rather than risk beeing discovered, Coulson and Mace kill the other agents.

Daisy finds Simmons hiding from the LMDs. They turn their weapons on each other, each suspecting the other might be an LMD. Daisy asks Simmons to giver her her hand so she can use her powers to prove she isn't an LMD and to feel Simmons' pulse. When Simmons refuses, Daisy jumps at her anyway and hugs her, proving neither of them are LMDs. Relieved that they've finally found someone they can trust, the two agents try to come up with a plan to take out the LMDs and save their friends from the Framework. With no way to find where the Framework's signal is coming from, they need to plug themselves into the simulation to rescue them. But first, they need to fight through the LMDs and the S.H.I.E.L.D. agents that have by now been convinced Daisy and Simmons are impostors.

They attach canisters of sleeping gas to an ATV, rig them to explode, and let it run through the Playground. It eventually crashes and the bomb goes off, flooding the Playground with the gas. The gas takes down the innocent agents, leaving only the LMDs. Coulson gets the May LMD ready for their contingency plan, leaving Mace behind to fight Daisy. Their fight leads into FitzSimmons' lab. The Mace LMD clearly has the upper hand, as Daisy tires out quickly and doesn't have her gauntlets to protect her arms. However, Daisy trips the LMD with her powers and drives a scalpel into his back, disabling it. Before she has any time to relax, she gets shot in the back by the Coulson and Mack LMDs who appear on both sides of her. She uses her powers to build up pressure between her hands before unleashing it on the LMDs as they approach her. The Coulson LMD is sent flying through a window, while the Mack LMD shatters into pieces. Meanwhile, Simmons gave an antidote for the gas to agents Piper, Davis and Prince and make their way to Daisy. Piper holds her reservations that Simmons isn't actually an LMD, but is proven wrong when the shattered remains of Mack's LMD lands in front of her.

Simmons and her team regroup with the badly-wounded Daisy. They order the other three agents to move any bodies to safety while they load the Framework's hardware onto the Zephyr. They're stopped at the blast doors to the hangar by the May LMD and explosive barrels. May radios the Coulson LMDs to let him know she has Simmons and Daisy. Coulson sends the recently-reactivated Fitz LMD to activate the "Daisy Fleet" while he checks in with May. By the time he reaches her, Daisy and Simmons are gone. The May LMD let them go because she wanted to. The May LMD went through something of an existential crisis since discovering she wasn't the real Melinda May. Her own desire to keep Coulson - the real Coulson - safe overrode her programming. As Daisy, Simmons, and the agents escape on the Zephyr, the May LMD detonates the explosives, destroying herself, the other LMDs, and much of the Playground.

Daisy and Simmons prepare to enter the Framework after they pick up Yo-Yo. Simmons reminds them not to pull either of them out of the simulation under any circumstances, and are plugged in. Daisy wakes up bathing in a tub, and gets a text telling her to wake up her boyfriend because they're being called in. She gets out of the tub expecting to find Lincoln, but sleeping in her bed is none other than Grant Ward. At other places in the Framework:

In the real world, Aida wakes up the Superior. She tells him that he now has an artificial body, remotely controlled from his severed head kept alive in a pod. Aida needs him to defend the Framework until she is able to feel all the human emotions he can for herself.

Retrieved from "https://marvel.fandom.com/wiki/Marvel%27s_Agents_of_S.H.I.E.L.D._Season_4_15?oldid=5741946"
Community content is available under CC-BY-SA unless otherwise noted.