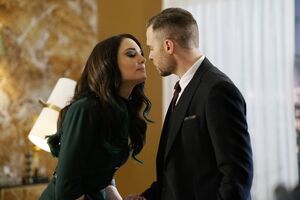 Radcliffe ran a simulation and now it's a brave new terrifying world.

Daisy and Simmons are in the Framework, the simulated reality Dr. Radcliffe created to escape from the real world and hole their friends prisoner.

Daisy, after getting a text to wake up her boyfriend and come into work, finds Grant Ward in her bed. She discovers her powers are gone when she tries to use them on Ward, who thinks "Skye" is just making a funny gesture. When they arrive at work - the Triskelion adorned with Hydra's symbols - Daisy sees a couple of Hydra agents beating up an Inhuman prisoner. Before she goes into the briefing, Daisy stops at a computer and pretends to check her email so she can look up her friends' whereabouts, discovering that Lincoln and Simmons have both been killed. She's pulled away from her computer by Melinda May, now a high-ranking agent of Hydra. Daisy tries to get her to remember her but soon realizes it's no use.

May leads the briefing about an Inhuman in Hydra's custody with potential links to "subversive groups." Someone known as "the Doctor" wants his interrogation fasttracked. Daisy recognizes this Inhuman as Vijay Nadeer from his picture, even though Hydra knows him as "Jason Rajan." May notices Daisy's interest in the Inhuman, so she orders her and Ward to interrogate him. During the interrogation, Daisy reveals she knows "Rajan's" Hydra-issued ID card is a forgery. She demands he reveal who in Hydra is making this for him. Ward breaks Vijay's jaw when he refuses to give up the mole within Hydra and instead starts reciting pro-Inhuman rhetoric. May, frustrated with the pace of the interrogation, decides to take over. Vijay taunts May with how she saved the Inhuman girl in Bahrain. Daisy talks May out of shooting him, but May instead decides the Doctor himself should take care of him. While Daisy moves Vijay to the Doctor, she asks Vijay what he ment by what he said to May. Vijay distracts her long enough to make a run for it. He is stopped by the Doctor's bodyguards. Daisy's is scolded for her failure to control her prisoner by the Doctor himself - Leo Fitz.

Meanwhile, Jemma Simmons emerges from a mass grave on what used to be the grounds of the S.H.I.E.L.D. Academy. Two bullet wounds on her shirt let her knows her counterpart in the Framework must have been killed. She stops a random driver who agrees to give her a ride, but when they approach an Inhuman checkpoint and Simmons pulls out a S.H.I.E.L.D. ID card, the woman panicks and kicks Jemma out of her car. She makes her way to a coffee shop, where she steals a man's keys. Two Hydra agents stop her before she can get to his car because she looks suspicious. They take her to their car, and one of the agents uses their computer to identify her. When the other agent checks this for himself, Simmons knocks him out with the car door. She takes his gun to take down the other agent, and steals there car. Once she finds her escape hatch from the Framework, she uses the computer to find Coulson.

Phil Coulson teaches his class at Alexander Pierce High School about "the Cambridge Incident." In the this timeline, the young Inhuman May saved in Bahrain was brought back the United States, placed in a classroom, and killed her classmates and teachers. Hydra used this event to come to power, galvanizing the people to surrender their individual liberties to them out of a shared fear of Inhumans. Coulson is quick to shut down one of his students, Burnell, when he brings up Hydra's history with Nazis. The lecture is interrupted when an official comes into his classroom and takes another student to test him for Inhuman genetics.

Simmons finds Coulson in his classroom after classes have ended. She tries to get him to remember her, but Coulson thinks she is just some crazy person. As Coulson tries to force her out of his classroom, Simmons finds the symbol of the T.A.H.I.T.I. Project on one a shelf, a sign of Coulson's life outside the Framework. Unable to convince Coulson of what she's saying, Simmons leaves on her own. Coulson thinks about what she said, and then reports her to Hydra. Outside the building, she finds Burnell has tagged her car with the phrase "Hydra Lies!" over an entire side. He thinks Simmons is with Hydra just as Coulson is, but once she talks to him about the Coulson she knows (especially how his training helped her steal that car), she wins over his trust. Burnell lets her borrow his car. Overhead, the whole ordeal is watched by one of Hydra's D.W.A.R.F.s. Later, Coulson goes through his secret collection of newspaper clippings and drawings, all of which are reminders of the person he is outside the Framework.

Back at the Triskelion, Daisy and Fitz watch as one of his machines probes Vijay Nadeer. Fitz reminds her of her place when she suggests what he's doing to Vijay is morally wrong. As Fitz tries to make small talk with her about her relationship with Grant Ward, May interrupts them with Coulson's report of a mysterious woman. Daisy recognizes this woman as Simmons, and heads to where they were supposed to find their exit from the Framework. Simmons is also there, but after a brief reunion they discover Ward followed Daisy there. He holds them at gunpoint, demaning Daisy reveal if Simmons is her contact with "the Resistance." Daisy tries to win over his trust. As Hydra agents close in on them, Ward shoots one, revealing himself as having ties with this Resistance. They make their getaway, evading Hydra's agents through the streets of Bethesda. Ward reveals he started working with the Resistance to protect Skye after finding out she was an Inhuman (and is surprised to hear she already knows she is one), and that he made Vijay's fake ID card because he was his contact. They pull into a parking garage. Ward tells Daisy and Simmons to go on to her apartment where she'll be safe while he destroys the evidence. Before they leave, Daisy tells him her real name.

Daisy and Simmons talk over their next move. Because the Framework is so realistic, and their friends seem so far gone, they choose to go back to the real world and plan there. When they try to use their escape route, the button doesn't work. Meanwhile, Fitz meets with Madame Hydra, Aida's persona within the Framework, about the mole within Hydra. Madame Hydra assures she has everything under control, but Fitz demands he take a more active role in stopping these subversives. Aida calms him down, reminding him that it is his creativity, not his anger, that Hydra needs, before they kiss.

With no other options, Daisy confronts Coulson by waiting for him in the back of his car. She begs him to remember who she is. Once she opens up to him, how he is the closest thing she has to family, Coulson remembers the name "Daisy."

Retrieved from "https://marvel.fandom.com/wiki/Marvel%27s_Agents_of_S.H.I.E.L.D._Season_4_16?oldid=5514495"
Community content is available under CC-BY-SA unless otherwise noted.