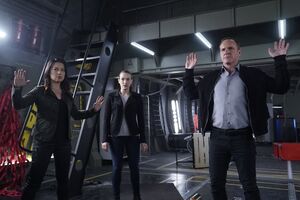 I clawed my way through that world! Worked myself to the bone to have a choice! To have bones and blood and freedom and love! And...NO!

Appearing in "The Return"

Synopsis for "The Return"

Ivanov, hearing commotion elsewhere on his drilling platform, watches as Aida teleports away with Fitz. While Coulson and May are still fuming over Aida giving herself Inhuman powers, Ivanov tries to kill them as Aida promised he could once she was free from Radcliffe's programming. Coulson destroys the Ivanov's LMD body by using his holographic shield to slice off the Russian's face, but the two agents see more LMDs based on the Superior are waiting for them throughout the platform. They barricade themselves inside the room, and they prepare to take on the Russian's LMDs while Coulson tries to catch May up on all she's missed since Aida put her in the Framework. May injects herself with adrenaline to destroy one Ivanov LMD while Coulson electrocutes another. However, neither of them are sure why Ivanov simply didn't flood the room to kill them.

Daisy, Simmons and Yo-Yo put out a fire aboard Zephyr One to send power back to the plane's defenses. Agent Piper shoots down the last of Ivanov's fighters as it attempted to kamikaze the Zephyr. Later, Daisy tries to explain to Yo-Yo why she left Mack behind in the Framework. Realizing Mack would never leave Hope behind on his own, Yo-Yo wants to go into the Framework and get him out herself. Daisy convinces her to help them rescue their friends on the drilling platform instead, and then they can try bring back Mack. When Simmons asks Piper and Davis why they never touched down to refuel, they show her and Daisy a video of General Talbot at a press conference. S.H.I.E.L.D. has been under investigation since the explosion that destroyed the Playground. Several agents were found badly wounded, a few others found dead, and the body of Jeffrey Mace washed up onshore somewhere with wounds that appear to be caused by Daisy's powers (Ivanov used a hammer on Mace's corpse to frame her for his death).

Aida and Fitz, meanwhile, are on a beach far away from Ivanov's drilling platform. Aida lets the waves wash over her feet, and relishes in her first true, human feelings. Fitz confronts her with all the horrible things she made him do in the Framework, but Aida deflects all of that as a result of Radcliffe's programming, something she had no control over. Furthermore, Aida only gave him a relationship with his father; every decision he made in the Framework was his own. The only other change she made in his life was to insert herself into it so she could have a relationship with him. Aida teleports them to an apartment resembling the one they had together in the Framework, thinking the familiar environment might help him adjust to life outside the Framework. Aida apologizes when she notices Fitz is still disturbed by his actions in the Framework. She remembers her promise to Ivanov when Fitz asks her who else she was trying to make happy.

Ivanov undocks his submarine and torpedoes his platform. Coulson and May have to leave Mack behind in order to get to the surface before the platform sinks to the bottom of the sea. Fitz convinces Aida to overcome her new fear of death to help rescue his friends. She teleports onto Ivanov's submarine, but is unable to get him to stop firing on his platform. Coulson and May reach the top of the platform as the Zephyr arrives to pick them up. Coulson and Yo-Yo want to go back in to get Mack, but the platform is too badly damaged for them to get to him in time and still have a way out. Yo-Yo, however, still refuses to leave Mack behind. Out of nowhere, Aida teleports herself, Fitz, and Mack onto the Zephyr. Simmons without hesitation shoots Aida and Fitz with an ICER, and lets Yo-Yo know they have Mack.

The Zephyr returns to the burned-out remains of the Playground. They place Fitz and Aida in the containment room because it was built to keep someone like Gordon from escaping. The team discuss what they should do with Aida and Fitz, eventually deciding the two should stay in containment until they can figure out just how different they are from their personas within the Framework. When Fitz and Aida regain consciousness, they struggle to figure out what will happen to them. Fitz especially laments the loss of his future with Simmons. Aida becomes enraged when she realizes Fitz still loves Simmons and not her. She demands Fitz choose her like she chose him. He locks himself in the containment module while she's distracted after failing to teleport the both of them away from S.H.I.E.L.D.'s headquarters.

Simmons, who was watching the whole thing through a video feed, tries to warn Coulson that they need to save Fitz, but she's interrupted by General Talbot, who arrived at the Playground with a number of armed soldiers to apprehend the agents of S.H.I.E.L.D.. While Coulson tries to explain everything to Talbot, Agents Davis, Piper and Prince get Fitz away from Aida. Fitz tries to explain to them that Aida's multiple Inhuman powers make her unstoppable. As they get away, Aida fires lighting from her hands to disable the devices that prevent her from teleporting out of the room. Some of Talbot's men stop Fitz and the other agents, but Aida appears behind one of the soldiers and kills him with his own gun. Agent Prince gets away with Fitz while Davis and Piper try to reason with the soldiers. Talbot, Coulson, May and Daisy hear Aida slaughtering Talbot's men over his radio. Once thinks he's taken Fitz to a safe place, Aida teleports behind him and kills him, too. Piper and Davis shoot Aida before she can get to Fitz.

Piper takes Fitz back into the containment module while Davis stays behind to make sure Aida stays down despite Fitz's pleas that Aida cannot be stopped. The module pulls onto the Zephyr, where Talbot and Coulson's team can see them. Fitz makes a frenzied plea for them to take off before Aida can get to them, and reminds May about the Inhumans they tested. May runs to get to the plane's controls. As Fitz predicted, Aida immediately recovers from her bullet wounds and kills Davis. Talbot turns down S.H.I.E.L.D.'s offer to come with them so his men can continue to search the base. As the Zephyr flies away, Simmons finds Fitz still in the module and comforts him. Coulson and Daisy find Yo-Yo entered the Framework while they were busy with Talbot.

Aida suffers through her emotions on Ivanov's submarine. The Russian suggests they use the Darkhold to rebuild the world she created in the Framework, but Aida thinks it's too clean. She wants Fitz and S.H.I.E.L.D. to suffer. Aida then rips off the Superior's shirt as if they're about to have sex, but crushes his head instead. Another of Ivanov's LMDs watches her do this and asks her if she's better now. Talbot's men clear out of the Playground when they realize there's no one else there. Right after he leaves, the portal to another dimension opens up, and Ghost Rider walks through. Meanwhile, Yo-Yo wakes up in the Framework to find herself restrained in a burning building.

Retrieved from "https://marvel.fandom.com/wiki/Marvel%27s_Agents_of_S.H.I.E.L.D._Season_4_21?oldid=5506013"
Community content is available under CC-BY-SA unless otherwise noted.