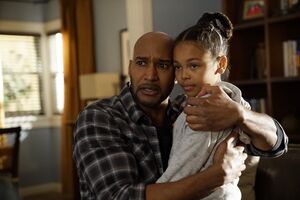 You know, I think this is the first time we've all been together in a really long time.

Coulson and his team prepare for Aida's next assault. Fitz explains to Simmons that in the Framework he experimented on roughly two dozen Inhumans, any of which Aida could have taken their powers. She tries to talk him out of his disgust with himself for what he did in the Framework, but Fitz seems apprehensive about even finding a way to kill Aida. Daisy tries to get Mack and Yo-Yo out of the Framework, but Aida has already began shutting it down. Inside the Framework, Radcliffe rescues Yo-Yo from the Triskelion after finding clues Daisy put into the Framework to lead him to her. The world is crumbling around them, and they need to get out before the Framework collapses into itself. Aida, Ivanov, and one of Ivanov's men who has also been copied into numerous LMDs prepare for their next move when they're suddenly interrupted by Ghost Rider's Hell Charger. Robbie demands they give him the Darkhold, and he easily overpowers the LMDs when they try to stop him. Robbie attacks Aida with his chain when she reaches for the book. To her surprise, she is unable to heal the burn the chain leaves on her arm. Aida shows Robbie the full extent of her powers, forcing him to transform into the Rider. Aida teleports away with the Darkhold just as Ghost Rider's chain would come across her.

Coulson gets a call from General Talbot telling him he needs to defend S.H.I.E.L.D. at inquiry. Intelligence agencies around the world want to dismantle the organization since Jeffrey Mace's autopsy revealed he was not an Inhuman. Coulson has to turn him down, however, as his presence would put everyone there in Aida's line of fire. Meanwhile, Daisy finds Robbie Reyes after she is alerted that he stole his car from a S.H.I.E.L.D. impound. He explains that he came back to this world to find Aida after her use of the Darkhold created a "tear" in the dark world where Robbie was, and he can now track her like their GPS tracked his car. The Rider wants to send both Aida and the Darkhold back to that dark world. In the Framework, Radcliffe and Yo-Yo try to convince Mack to leave the Framework. Things are suddenly disappearing as a result of the world shutting down. Mack helps evacuate the Resistance's headquarters rather than listen to Radcliffe's attempt to convince him to come with them.

S.H.I.E.L.D. identifies one of the LMDs Robbie destroyed as belonging to a Russian intelligence analyst attending Talbot's inquiry. He brings Anton Ivanov with him, who makes an impassioned plea for the world's intelligence agencies to turn against S.H.I.E.L.D. for their "secret program" of breeding and weaponizing Inhumans. Talbot tries to shut him down, but Ivanov pulls out the Darkhold and offers the other agencies an opportunity to join his crusade against Inhumans the book laid out for him. The inquiry is interrupted by gunshots coming from the hallway. An LMD of Daisy Johnson enters the room where Talbot holds his inquiry and shoots him in the head. S.H.I.E.L.D. arrives on the scene as the LMD Daisy makes a run for it. Robbie runs after her, and Ivanov makes one last attempt to convince the other agencies to join him in taking on S.H.I.E.L.D. and the Inhumans. Coulson and May shoot both Ivanov and his accomplice, but their LMD bodies shrug off the bullets. The Russians run away and leave the Darkhold behind. Talbot's assistant confirms he still has a pulse. Meanwhile, Daisy runs into Aida and the LMD of herself. While Aida taunts her with the opportunity to watch her kill herself, Robbie sneaks up behind them and destroys the Daisy LMD with one strike from his chain. Aida, remembering the damage the chain did to her earlier, teleports away, leaving the LMDs of Ivanov, his accomplice, and a security guard to fight them. Robbie destroys the accomplice's LMD by ripping out his eye with a power drill. Daisy throws the security guard over to him with her powers, and Robbie transforms into the Ghost Rider to destroy him. Ivanov throws his knives into Daisy, but before he can get in another hit on her, Daisy and Robbie use their powers together to shatter his LMDs. Coulson and May catch up to them, but Coulson is mostly disappointed his missed seeing them fight together.

Coulson's team regroups on the Zephyr. The realize that once the footage of the Daisy LMD's failed assassination attempt on Talbot gets online, S.H.I.E.L.D. will be dead and anti-Inhuman paranoia will spread across the world. Aida will be able to rebuild the regime she created in the Framework in the real world. Coulson wants to use the Darkhold as bait to lure Robbie out, but Aida is too afraid of Robbie's powers to get close to them. He comes up with a new plan when FitzSimmons let them know the Zephyr does not have the power to keep Mack and Yo-Yo safe. They fly back to the Playground, where they know Aida and the military are probably waiting for them. Coulson, however, is tired of hiding, and is ready to take the fight back home. In the Framework, the bus carrying the people from the Resistance's headquarters is stuck in traffic. The bridge in front of them suddenly vanishes, as does everyone on the bus except for Mack, Yo-Yo, Radcliffe and Hope. Daisy was able to delay their removal from the Framework. They go to Mack's house, where Daisy put the exit. Hope overhears Yo-Yo telling Radcliffe she doesn't want to lose Mack over his daughter who isn't even real.

FitzSimmons work to transfer power from the Playground to the Zephyr when Aida suddenly appears between them. Fitz tries to convince Aida that she can get over these emotions, but she attacks Simmons when she sneaks up behind Aida with a screwdriver. She uses Vijay Nadeer's powers to swiftly take the screwdriver from her and stab Simmons in the chest. Aida makes Fitz beg her not to kill Simmons. Fitz promises he'll get the Darkhold from Coulson for her if she lets Simmons go. Aida instead electrocutes Simmons and goes to take the book from Coulson herself. Coulson refuses to give her the book, and Aida is shot from behind by Jemma Simmons - the "Simmons" she killed was just an LMD. Just as Aida becomes certain their trap failed, Coulson turns into the Ghost Rider. She teleports away, but accidentally takes Coulson with her. They eventually end up back in the Playground, where FitzSimmons watch as the Ghost Rider's fire incinerates her. The Rider lifts Aida's charred remains and hurls the, letting them crumble into dust.

The Ghost Rider goes back to Robbie. Coulson chooses not to tell the rest of his team what deal he made with the Rider spirit. Robbie takes the Darkhold and uses his chain to create a portal back to the dark world it came from. He leaves with the book, and the portal closes behind them. Mack and Yo-Yo tell the rest of the team he's learned that Talbot is alive and soldiers are coming to the Playground to arrest them. Fitz offers to stay behind and take the fall for everything that's happened, but the rest of them agree they're in this together. They wait for their captors at a diner, and enjoy their first time together in a long time. The power is shut off as soldiers swarm the diner. Even though Coulson and his team don't resist, the man leading the soldiers pulls out a device that freezes them all in place.

Coulson wakes up in his prison cell some time later. The cell appears to be in outer space. After watching asteroids pass his cell's window for a few minutes, Coulson gets ready to go to work.

Retrieved from "https://marvel.fandom.com/wiki/Marvel%27s_Agents_of_S.H.I.E.L.D._Season_4_22?oldid=5506018"
Community content is available under CC-BY-SA unless otherwise noted.