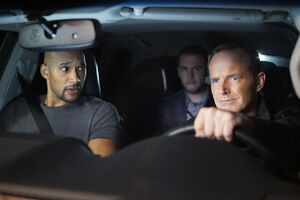 Yo-Yo is at a party in Miami when the city is hit by an EMP, shorting out electronic devices throughout the city. A group calling themselves the "Inhuman Resistance" takes credit for the attack, and demands the registration of Inhumans come to an end. The Director, who has his suspicions that Inhumans are behind this, has Coulson, Mack, and Fitz investigate the source of the EMP. Daisy and Robbie Reyes are caught in a similar EMP that hits Los Angeles. Fortunately, Robbie's car is unaffected by the attack, since it was made before electronics were put in cars. They hurry to find Robbie's brother, Gabe, who has been left stranded in the middle of the city. While they're looking for him, Robbie mentions that his uncle Elias Morrow worked for Momentum Energy. Daisy reveals she knows his uncle is currently in jail for an attempted murder, but Robbie says his uncle had a reason for attacking that person. Daisy and Robbie find Gabe getting harassed by some punks. They try to fight them without using their powers, but Daisy is forced to use her's to save Gabe, shattering the bones in her arm in the process. That night, after Robbie goes to Canelo's to make sure the place makes it through the blackout, Daisy asks Gabe about his uncle, and Gabe reveals he knows she's Quake. He asks her to leave and stay away from Robbie because he doesn't need to be around people like her.

Simmons has Melinda May sent to Dr. Radcliffe's house so they can find a cure to her condition. They only had a short time to act before her condition would kill her like it recently did to Chen. Before S.H.I.E.L.D. arrives, Dr. Radcliffe had Aida put to "sleep" so they do not find out what he is working on. Meanwhile, Coulson and his team arrive in Miami to investigate the source of the EMP. More cities have been hit by EMPs, all leading to outbreaks of riots and violence against Inhumans. Their equipment fails when they cross into the effected area, leading Fitz to conclude that the EMP is constant series of pulses. This forces the team to resort to low-tech methods of finding the source of the EMP, but first they have to get to Yo-Yo before any anti-Inhuman extremists get to her. Yo-Yo, however, is already being held hostage with everyone at her party. These thugs seem different from other rioters and are equipped with military-grade weapons. Their leader says they know one of them is an Inhuman, and demands that Inhuman surrender to them. When one of the other party-goers points the finger at a guy who performed magic tricks at the party, Yo-Yo uses her powers to snatch their guns away from them. One of Yo-Yo's friends reveals she is the Inhuman, but Coulson and his team intervene just in time. Together, they fight the rioters and uncover that they are actually Watchdogs. The radical anti-Inhuman group is not only responsible for the blackouts, but is also using them as a cover to attack Inhumans under S.H.I.E.L.D. protection.

Back in New York, Dr. Radcliffe came up with a risky plan to save May. His idea is to temporarily kill her and bring her back once she reaches minimal brain activity, effectively "rebooting" her brain. Just as Simmons is about to revive her, an EMP hits New York, leaving them without a way to revive her. With no other option, Dr. Radcliffe hooks up Aida's battery, which was unaffected by the EMP, to a defibrillator, giving Simmons what she needs to bring May back before she's too far gone. But this latest EMP also took out power in Washington. With the President about to send in soldiers to stop rioting in cities hit by the blackouts, Fitz doesn't have much longer to find the source of the EMPs and put an end to them. Fitz makes some rudimentary compasses and has Coulson, Mack, and Yo-Yo use them to pinpoint the source of the EMPs. They find it in a room heavily-guarded by the Watchdogs. Yo-Yo takes their guns away, and the team takes the Watchdogs down and disable the generator. The EMPs stop, and power is soon restored to the cities the Watchdogs attacked.

The next day, Director Mace, at Coulson's recommendation, gives a press conference where he not only confirms the Watchdogs were behind the attacks, but also re-introduces the public to S.H.I.E.L.D. Back in Los Angeles, Robbie comes home and asks his brother where Daisy is. Elsewhere, Senator Nadeer, a politician who publicly blamed the blackouts on Inhumans, gets a phone call from the Watchdogs informing her that they killed 17 Inhumans during the attacks. Nadeer leaves her brother's apartment to meet with them, leaving her brother - trapped in a Terrigenesis cocoon - alone.

Retrieved from "https://marvel.fandom.com/wiki/Marvel%27s_Agents_of_S.H.I.E.L.D._Season_4_3?oldid=5726926"
Community content is available under CC-BY-SA unless otherwise noted.