"Deals with Our Devils" 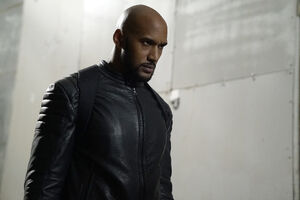 Episode Title
"Deals with Our Devils"

My axe is plenty sharp... and a shotgun!

Appearing in "Deals with Our Devils"

Synopsis for "Deals with Our Devils"

S.H.I.E.L.D. searches the Roxxon power station for any sign of Coulson, Fitz or Robbie. Eli Morrow uses his new, matter-generating powers to kill a team of agents who find him and block his exit to prevent any more from persuing him. After discovering Eli's treachery, Agents May and Mack return to the Zephyr and watch the security footage from the facility with Daisy and Director Mace, showing their comrades vanishing when Eli completes his experiment. Mace orders his agents to stand down rather than chase after Eli, and assures his agents that he will call Jemma Simmons to tell her about Fitz and so she can figure out a way to find them. This is a lie, however, as Mace has given Simmons over to men working for Senator Nadeer so she can examine an Inhuman trapped in a Terrigenesis cocoon whose identity is kept a secret from her - the senator's brother.

Mack and May each try to figure out what they can do for their missing comrades. Mack looks into the Chinatown gang, and deduces that Eli Morrow hired them to steal the box that contained Lucy Bauer when he discovers the Morrow and the gang's former leader both served time in the same prison. May turns to the Darkhold for a way to find Coulson. Mack talks her out of using the evil book, just as Director Mace orders Mack to stay on the plane and return to the Playground rather than investigate the Chinatown gang. As the Zephyr is taking off, Mack gets on a motorcycle and rides off the plane. Daisy, concerned for her friend's safety, jumps into Robbie's car and follows him.

Coulson, Fitz, and Robbie, meanwhile, have been with them the entire time. Eli's experiment left the three of them trapped between dimensions like Lucy Bauer and the other "ghosts," but unable are invisible to everyone and unable to communicate with them. Robbie tries to confront his uncle with what Lucy Bauer told him about his past, but instead witnesses Eli kill the team of S.H.I.E.L.D. agents. Fitz and Coulson unsuccessfully try to let their friends know they are right there with them and not lost. Robbie eventually starts to feel an unbearable coldness, and the Ghost Rider entity leaves his body. The spirit possesses Mack and takes off to find Eli Morrow. Robbie follows him by getting into the car with Daisy.

May and Director Mace return to the Playground. They meet with Dr. Radcliffe, who with Aida will examine the box and figure out a way to rescue Coulson, Fitz and Robbie in Simmons' place. May wants Dr. Radcliffe to use the Darkhold, but he quickly shuts that idea down after taking a brief look at the book's pages. Unknown to either of them, Fitz and Coulson are in the room with them. Fitz tries in vain to convince Aida to use the Darkhold. As if she could hear him, Aida suggests that she read the book, that her artificial mind is more capable of processing the knowledge in the book without being corrupted than an organic one.

Elsewhere, Simmons realizes the lab set up for her is making the Inhuman nervous. She makes the other scientists leave the two of them alone, and then gets out of her Hazmat suit and introduces herself to the Inhuman. This not only calms him down, but also causes the cocoon to begin to crack open. Simmons peels the cocoon away, eventually revealing some of his face. He thanks Simmons for what she's done for him, but before he can tell her his name the other scientists put a hood over her head and take her away.

Aida uses the information from the book to build a portal that Fitz and Coulson could cross through to come back to their dimension. As Coulson and Fitz watch her construct a laser grid to open the portal, a vortex opens behind Coulson that pulls him in. Once the portal opens, May and Dr. Radcliffe watch helplessly as Fitz tries to prevent him from falling in. Fitz is able to pull him out of the vortex, and the two of them cross through the portal. Fitz immediately goes to confront the Director with what he knows about Simmons, but she arrives back at the Playground just as he gets in Mace's face.

Back in California, Daisy loses Mack/Ghost Rider in the Los Angeles traffic. Robbie slams his fist against the dash out of frustration, inadverently telling Daisy where to go to find Mack. Daisy has to fight several members of the gang when she gets to their hideout. Since he can be of no use to her, Robbie goes to find the Mack, and finds him threatening one of the gang's leaders. Robbie confronts Mack, but soon realizes he is actually talking to "the other guy." The Ghost Rider entity tells Robbie that he can feed off Mack's pain - that Mack lost hope. He says that he's been where Robbie is before and won't go back. Daisy sees "Mack," seemingly talking to himself, turn into the Ghost Rider. He walks towards Daisy, but Robbie stops him. Robbie promises that if the Ghost Rider leaves Mack and helps him settle his score with Eli Morrow, then he will help the Ghost Rider settle all of his. The spirit takes Robbie's offer and goes back into his body.

Some time later, Mack is alone in the room with the portal, crying while looking at a photo labeled "HOPE" when Robbie comes back through the device. Mack seems to know more about what the Ghost Rider is, since he tells Robbie he knows he isn't alone. Robbie asks Mack if he wants to help him settle his last score. At Dr. Radcliffe's house, Aida constracts a holographic brain while the doctor celebrates how he and Aida saved the day.

Retrieved from "https://marvel.fandom.com/wiki/Marvel%27s_Agents_of_S.H.I.E.L.D._Season_4_7?oldid=5598988"
Community content is available under CC-BY-SA unless otherwise noted.