Marvel Database
Register
Don't have an account?
Sign In
Advertisement
in: Episodes, Marvel's Agents of S.H.I.E.L.D. Season 5, 2018, March,
and 82 more

Just because I've made peace with dying doesn't mean I'm in a hurry.

A D.W.A.R.F. surveying the damage left by the explosion of the Kree beacon discovers a mysterious rift in the Lighthouse's basement when it's suddenly destroyed by Lash. Fitz shows Coulson and May footage he's collected from a D.W.A.R.F. of a dense forest complete with clouds and sky that exists about 150 ft. below them on Level 27. Fitz theorizes the simultaneous destruction of three monoliths tore open a hole in spacetime, causing another dimension to spill over into their's and creating anomalies such as the forest. If they cannot close the rift, this might be the event that causes the Earth to be torn in two.

After Daisy and Deke are attacked by a Kree warrior, Fitz suggests the other dimension can somehow look inside their minds and manifest their greatest fears (the forest being Deke's fear), and he uses the image of Lash from the D.W.A.R.F. to further prove his theory. He comes up with a plan to close the rift using the Gravitonium in Deke's belt buckle, but whoever closes it might sacrifice themselves in the process. Coulson quickly volunteers for the job. While arguing with Daisy and May, neither of whom wants to lose him, Coulson suddenly blacks out. After an MRI scan of his body, Simmons reveals to the team that Coulson has necrotic tissue branching out from the tissue surrounding the wound left when Loki killed him on the Helicarrier. Coulson, however, already knew he was dying, as the deal he made with the Ghost Rider burned through whatever was done to revive him before.

Coulson sends Deke out with a to-do list, something only he can do because General Hale isn't looking for him. However, when he gets to River's End, Deke finds the town is swarming with General Hale's soldiers. A local police officer contacted her after he recognized her when she bailed Deke out of jail. General Hale suspects Deke might be an LMD because there are no files to indicate he even exists. Luckily for S.H.I.E.L.D., Deke had called in multiple Daisy sightings to compel Hale to leave River's End.

Fitz's plan to close the rift kick into gear when it manifests an LMD of Simmons to kill Yo-Yo. Coulson goes down to the Lighthouse's basement, but is confronted by the apparition of an unscarred Mike Peterson. "Peterson" tries to convince Coulson that his whole life for the past few years has all been in his head, and he is still on the operating table after Loki stabbed him. Meanwhile, Deke returns to the Lighthouse in a quinjet filled with many of S.H.I.E.L.D.'s former allies - including Agent Davis and the real Mike Peterson. Mike saves Coulson from the fake Mike Peterson just as Coulson sees through its ruse. Together, Coulson and Deathlok take on fear manifestations resembling Lash, Vrellnexians, and Hive before Coulson activates Fitz's device to close the rift.

Fitz and Simmons are married that night in the forest on Level 27. Deke got many of the items needed for the wedding and the celebration when he was out earlier, including finding a ring for Simmons that looked like one his mom used to where that he thinks was his grandmother's. Back in town, General Hale's assistant shows her a genetic profile on Deke that shows he is a match for both Fitz and Simmons. 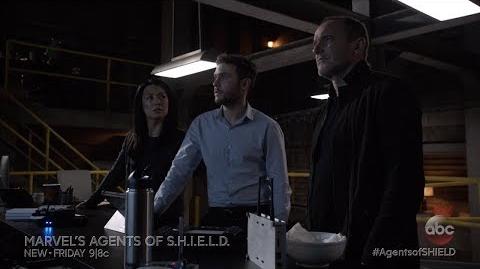