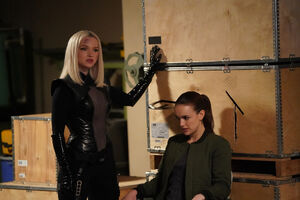 Appearing in "All Roads Lead..."

Synopsis for "All Roads Lead..."

Talbot, brainwashed by Hydra's Faustus conditioning, steals a gun from the Lighthouse's armory. Mack almost catches him pausing the feed from the Hintons' room to the control room. Daisy calls together a meeting of S.H.I.E.L.D.'s top agents (and Deke) after she traced a ping from one of the mechs to a decommissioned military installation in the Appalachians where they believe General Hale's bunker is located. She and May will lead an assault on the facility while Coulson quarterbacks from the Lighthouse. At the Hydra bunker, General Hale's assistant lets her out of Ruby's room after her Ruby trapped her in there. They check on Carl Creel, but the voices of Franklin Hall and Ian Quinn from the Gravitonium have driven him insane. Creel absorbs the concrete from his cell wall and repeatedly bangs his head into it to "free the voices."

General Hale surrenders herself without putting up a fight when Daisy and May attack her base. She warns them that they need to stop Ruby before she can become the Destroyer of Worlds or hurt FitzSimmons. She tells the rest of the team at the Lighthouse about the change in plans, but they warn going to stop Ruby might start the chain of events that tears the Earth in half. Meanwhile, Talbot breaks into the Hintons' room to look at Robin's drawings. He realizes he can't get Robin to explain the meaning behind her visions peacefully, so he kidnaps her after knocking out her mother, Polly. Mack realizes Talbot is under Hydra's control after they notice the paused feed and find Polly unconscious in her room. Coulson and Mack catch up to Talbot and try to convince him to hand over Robin. They get him to realize Hydra messed with his head, but instead of standing down Talbot turns his gun on himself. Mack gets away with Robin while Coulson tries to talk him out of shooting himself, taking advantage of his conditioning to force Talbot to turn the gun on him instead. Mack soon returns and quickly ices Talbot.

At the Hydra lab in England, Ruby and Werner von Strucker threaten to torture FitzSimmons if they don't rebuild the infusion chamber more quickly. Once the chamber is completed, they try to warn Ruby against infusing herself with the Gravitonium due to the substance's unstable properties and the fact that she may shatter the Earth into a million pieces. The infusion process begins anyway when Werner feeds the Gravitonium into the machine. Ruby almost immediately begins convulsing in tremendous pain, and she begs Werner to turn it off. Meanwhile, Daisy, May, and General Hale have arrived at the facility, and Hale runs off on her own when she hears her daughter's screams. Fitz turns off the machine after Ruby absorbed only 8% of the Gravitonium. This, however, was more than enough to infuse her with incredible powers, nor did it free her of the voices of Quinn and Dr. Hall that are psychologically tearing her apart. Without any control over her new powers, Ruby effortlessly crushes Werner von Strucker's skull. Daisy and General Hale try to talk Ruby down while May and FitzSimmons retreat to the Zephyr. They come across Yo-Yo on the way back, but when they tell Yo-Yo what's going on she joins Daisy rather than escape with them. Even though General Hale appears to be getting through to Ruby, Yo-Yo decides not to take the risk and slits Ruby's throat with her own blade. Hale barely has time to be enraged at Yo-Yo before her daughter mysteriously levitates and unleashes a bright flash of light, allowing Hale to flee. Despite Daisy's harsh criticism of what she did, Yo-Yo thinks she saved the world.

General Hale arrives on the Confederacy's ship and calls out for Qovas. She tells them she found the Gravitonium they're looking for, and that S.H.I.E.L.D. has it. Qovas asks her if she would have him kill them, but General Hale doesn't care. 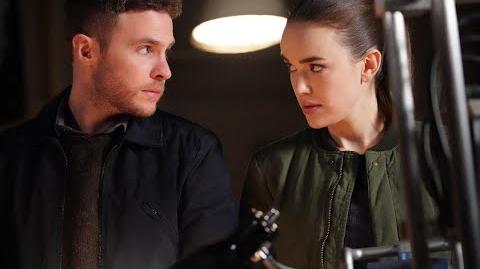 Like this? Let us know!
Retrieved from "https://marvel.fandom.com/wiki/Marvel%27s_Agents_of_S.H.I.E.L.D._Season_5_18?oldid=6498207"
Community content is available under CC-BY-SA unless otherwise noted.