Marvel Database
Register
Don't have an account?
Sign In
Advertisement
in: Episodes, Marvel's Agents of S.H.I.E.L.D. Season 5, 2018, May,
and 63 more

"The One Who Will Save Us All"

I'm Earth's last hope, Phil. Its true protector. The one who can save us all. Now either you accept that... or suffer the consequences. Kneel.

Talbot, recently infused with the gravitonium, levitates himself and Coulson onto the Remorath space ship hovering over the Lighthouse before it leaves the Earth's atmosphere. They're met by a contingent of Remorath soldiers who take the two men prisoner and bring them before Qovas. Coulson states they intend to negotiate a new deal for the safety of Earth, insisting that Qovas' deal with Hydra is invalid since the latter doesn't speak for humanity. Talbot bluntly demands the Remorath kneel before him. After a brief display of his powers on one of the alien soldiers, the Remorath are left with no other choice than to surrender to Talbot. While Coulson meets with General Hale, Talbot demands Qovas bring him to meet the rest of the Confederacy. Coulson and Hale help Talbot convince Qovas to let him meet them, especially when Coulson points out that Talbot is the gravitonium they wanted.

At the Lighthouse, the last of Qovas' soldiers drinks the Odium and makes a last-ditch attack on Mack. Mack overpowers him, but May stops him from killing the Remorath invader so they can question him about what exactly Coulson and Talbot are up against. They chain him up in FitzSimmons' lab, but his heart explodes from the Odium before he can give up any useful information. May has Simmons examine the remaining sample of Odium.

Daisy makes contact with the Lighthouse once Deke gets the bunker's electric systems up and running again. She's immediately confronted by Yo-Yo when she returns to the Lighthouse. She blames Daisy for everything that happened when the Remorath attacked because she was not there to help them, but when she grabs Daisy's bag and opens it to find Jiaying's desiccated corpse inside, the two Inhuman S.H.I.E.L.D. agents start to fight. May breaks them up and warns Yo-Yo that if she isn't going to help them save Coulson then she needs to leave.

Later, Deke tries to tell Daisy about his feelings for her, but he quickly finds out Daisy won't let herself get close to anyone and may still be in love with Lincoln. Daisy gives the Centipede Device and Jiaying's corpse to Simmons before she leaves to rescue Coulson and Talbot. She wants Simmons to look past the moral questions regarding using Jiaying's remains like this if it means saving Coulson's life. With that out of the way, the Zephyr takes off with Daisy, May, Deke and a handful of other agents to rescue Coulson and Talbot from the Remorath.

Qovas brings Talbot before the Confederacy after dressing him up to be more presentable to them. The other elite members refuse to consider giving Talbot a permanent place among them, as the Confederacy has always had only six members. Talbot, however, shows them how serious he is when the gravitonium in his body consumes one of them to open a place for him. This impresses one of them, the Kree warrior Taryan of House Kasius, who stays behind to talk to Qovas and Talbot in private after the other members leave. Taryan informs Coulson that the Confederacy never planned on fulfilling their end of the bargain with Hydra; it was merely a ruse to swindle the Earth out of its precious resources before Thanos' arrival. Talbot wants to join the Avengers in fighting Thanos, but Taryan warns him that Thanos is far too powerful for Talbot and the Avengers to overcome. If Talbot were to absorb the rest of the gravitonium under the Earth's surface, however, Taryan thinks he might stand a chance.

Talbot and Qovas return to the Remorath ship with their new plan. Coulson thinks Talbot's plan is too dangerous, and tries to warn him he's being played when he learns the plan comes from a Kasius. Talbot, however, refuses to listen to Coulson's concerns, and orders him to kneel. The Zephyr boards the Remorath ship soon afterwards. Talbot thinks Coulson betrayed him by calling S.H.I.E.L.D. agents to take him out. Talbot threatens to crush Coulson with his incredible powers when May and Daisy reach them. General Hale tries to use Talbot's Faustus conditioning to compel him to free Coulson. It at first appears to work as he puts Coulson down, but he then turns on Hale and kills her for her betrayal. Daisy attacks Talbot with her powers, but he merely shrugs it off and easily throws Daisy up to the ceiling to knock her out. May surrenders when Talbot threatens to do to Coulson what he did to Hale if she doesn't stand down. Talbot now considers the S.H.I.E.L.D. agents prisoners of war, and orders Qovas treat them as such. Daisy, however, is handed over to Taryan. 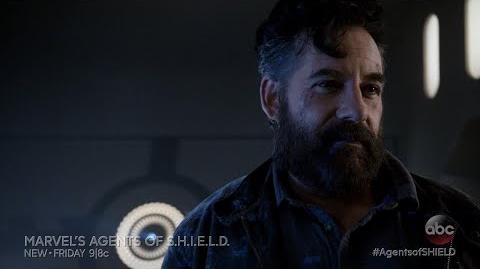