Marvel Database
Register
Don't have an account?
Sign In
Advertisement
in: Episodes, Marvel's Agents of S.H.I.E.L.D. Season 5, 2018, May,
and 51 more

The team is torn apart over if they should use the Centipede serum to save Coulson even if it means they cannot stop the Earth's destruction. Yo-Yo grabs the Centipede device in the heat of things to prevent Daisy from using it on Coulson. While the team continues to argue over what they should do, May destroys the Odium, the substance they would have used to stop Talbot. With the matter settled, FitzSimmons get to working on a healing agent that could cure Coulson. Yo-You apologizes to Coulson for appearing to be in favor of letting him die, but Coulson assures her that he would've taken her side in the argument.

In the wreckage of the Remorath ship, Talbot forces Robin to show him where she saw him tearing up the Earth in her visions. When she refuses to show him, Talbot has the last two Remorath drag her mother Polly to another area of the ship. Robin breaks, and points Talbot towards Chicago. Talbot flies the Remorath ship over Chicago, bringing it down on top of several tall buildings. Chaos breaks out in the streets of Chicago as Talbot floats himself down to the ground. He levitates a column of earth into the sky just so he can get the Gravitonium buried deep beneath the city.

Back at the Lighthouse, Deke says his goodbyes to Daisy. He shows her his room, crammed with all the items he's collected from around the Lighthouse; signs of a "damaged man," as he calls it. He wants to see the Earth as it was before it's destroyed or before S.H.I.E.L.D. changes the timeline and he's blinked out of existence. Before he leaves, Deke tells her that if she really wants to lead one day she has to repair the team's trust in each other that the issue of Coulson's death broke. They're suddenly interrupted by Piper, who tells Daisy they've found Talbot. En route to Chicago, Daisy announces to the team she's decided to put Mack in charge while Coulson is down because, as Yo-Yo would point out, she is not entirely thinking with her head. After she makes her announcement, Coulson surprises the team by joining them and telling Daisy she made the right decision.

The Zephyr arrives over Chicago. S.H.I.E.L.D. hijacks every phone in the city so they can tell first responders to not engage Talbot, and to instead get innocent bystanders out of buildings and to the Zephyr where Simmons, Yo-Yo and Piper are waiting to get them to safety. Mack, Fitz and May go to rescue the Hintons from the Remorath ship before it and the buildings it rests on collapse, while Daisy, Coulson and Davis take the Quinjet to confront Talbot. Before they land, Coulson tells her he won't be going with her. He didn't take the Centipede serum, and can now barely stand up on his own. Coulson asks Daisy to appeal to Talbot's good nature before resorting to violence.

Daisy finds Talbot in the middle of the city. She tackles him, their combined powers sending them flying down the street. Daisy tries to convince him that they should work together, think of his son, and that he's already a hero because he signed up to fight for the greater good. Talbot, however, sees this as another attempt to deceive him. He grabs Daisy, and flies high into the sky before hurdling back towards Earth. In the crater their impact made, Talbot attempts to consume Daisy into the gravitonium. While struggling to break free, Daisy notices Coulson put the vial of Centipede serum inside her gauntlets. She injects herself with the serum, supercharging her powers to not only free herself from Talbot but to also quake him out of Earth's atmosphere. Talbot's body freezes over in the cold of space.

Meanwhile, Mack and May rescue Robin from the Remorath ship. Robin tells them that the Remorath took her mother to another part of the ship. Mack volunteers to find her. When Fitz catches up to May and Robin, he reminds her that the future Yo-Yo said neither Mack nor Polly Hinton make it. Mack frees Polly from her holding cell, but are soon ambushed by the Remorath. May and Fitz arrive just in time to help Mack fight them off. Once they're reunited with Robin, the shockwave caused by Talbot slamming himself and Daisy into the Earth causes rubble to fall on top of Fitz. Mack and May dig him out, but soon find a piece of sheet metal cut through his torso. Mack and May stay with Fitz through his last moments.

Mack breaks the news about Fitz to Simmons when they return to the Lighthouse. Even though the saved the Earth, Fitz's death and Coulson's impending one makes their victory bittersweet. Furthermore, Simmons finds Deke's room completely empty, a sign that he may have been erased from existence. Some time later, the team puts up a plaque on the Zephyr that reads:

In rememberance of our fearless leader PHILLIP J. COULSON He gave us his wisdom, his love, and his life (a couple of times)

The team says their goodbyes to Coulson. He tells Jemma that he doesn't have any doubt that she will find the Fitz who is still cryogenically frozen out in space somewhere, Mack that he knows he is ready to lead S.H.I.E.L.D., and Daisy that he's proud of who she has become. Coulson leaves the Zephyr to spend his final days on Tahiti (the real Tahiti) with May. As the Zephyr flies away, Daisy asks Mack, the new Director of S.H.I.E.L.D., where they're off to first. 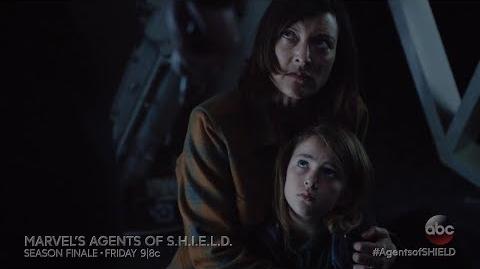