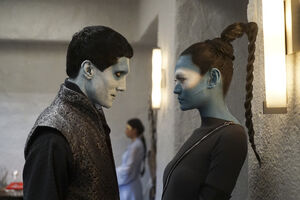 Kasius prepares his guests for the upcoming display of his Inhumans' abilities in the arena. Fitz, disguised as a Marauder named Boshtok, find himself alone with Simmons and proposes to her; however, the device Kasius put in her ear prevents her from seeing any of it. Fitz realizes something is wrong, though, and convinces Kasius to turn off the device so she can hear his guests. Meanwhile, the Kree round up the kids in the Exchange so they can be exposed to the Terrigen mist and any Inhumans among them can be sold to Kasius' guests. The only one to undergo Terrigenesis is Flint, who is close to Tess. Yo-Yo runs off with Flint just as he sheds his cocoon to make the Kree think his body was destroyed during Terrigenesis.

The fights begin with Ben, the telepathic Inhuman Daisy befriended earlier, facing off with not another Inhuman but with Melinda May, who Kasius describes to his guests as an agent of S.H.I.E.L.D.. Although both are talented fighters, Ben's Inhuman abilities and May's injured leg gives Ben a clear advantage over her. Fitz interrupts the fight before Ben can kill May, saying he is bored with the fight and wants to see "the Destroyer" in action. At Fitz's request, Kasius decides to send May to the Earth's surface so the fight isn't dragged on any longer. Rather than sell him to any of his guests, Kasius has Sinara kill Ben in front of them for lying to him about how many S.H.I.E.L.D. agents were sent into the future.

The Kree Vicar who oversaw the Terrigenesis ceremony confronts Tess, suspecting she is somehow hiding Flint. Coulson, Mack and Yo-Yo talk to Flint to get them to trust him. Yo-Yo tells him the story about how she underwent Terrigenesis and discovered her Inhuman powers. Unknown to them, Grill overhears their entire conversation, and threatens to reveal them to the Kree. Coulson tells him they are the S.H.I.E.L.D. agents of prophecy sent through time to save the world, but Grill only laughs them off. Since Grill heard the pilot he hired fought in the arena as an agent of S.H.I.E.L.D., he's come to suspect the rest of them are double-crossing him. Grill starts to beat Flint while he pins the rest of the team to the wall with their metrics. Flint taps into his new, geokinetic Inhuman powers to form debris from the Earth's surface into a boulder, and sends it crashing into Grill's head, killing them. Later, Coulson and Mack look for Tess, but find the Kree killed her and placed a sign on her body warning the other humans against hiding Flint.

Kasius' plans change when his brother, Faulnak, arrives at the Lighthouse to place a bid on Quake. Kasius has a strained relationship with his father and brother, who run their family's empire while - as his guests suggest - Kasius was "exiled" to Earth. This also puts a snag in Fitz' plan, as he planned on buying Daisy from Kasius to rescue her from the Kree. Furthermore, Faulnak forces Kasius to have Sinara fight her rather than one of his other Inhumans. Daisy signals to FitzSimmons that it's time to strike once she thinks she's won the fight. Simmons slashes Kasius with a knife she hid from him, and Fitz takes out a few of his guests with an I.C.E.R.. Daisy uses her powers to levitate up to them, but Faulnak turns on her inhibitor before she can attack them. Simmons proposes to Fitz when they jump down into the arena. They grab Daisy and the three agents of S.H.I.E.L.D. escape together.

Elsewhere on the Lighthouse, Enoch while disguised as a Kree incapacitates one of the Kree guards to go to a closed-off area of the station. 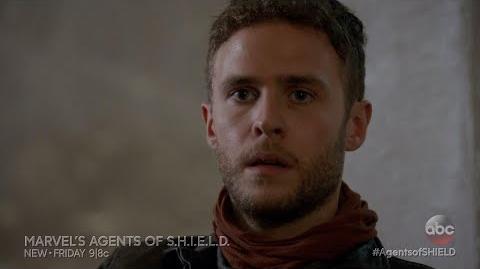 Retrieved from "https://marvel.fandom.com/wiki/Marvel%27s_Agents_of_S.H.I.E.L.D._Season_5_6?oldid=5740852"
Community content is available under CC-BY-SA unless otherwise noted.